Marques’Almeida decamped from London Fashion Week to Paris for the spring 2019 shows in September. To their advantage, they will have greater access to the buying market. The disadvantage, undoubtedly, is the press attention they’ll lose to the big advertisers, like Dior, Chanel, and Louis Vuitton. Alas, the show must go on. It took place at the Palais de Tokyo. The starting point for designers Marta Marques and Paolo Almeida was to “use the roots which are secured in the brand to experiment with change, open up new roots and find new ways to move forward,” read the show notes. They updated their denim offering with aprons and subverted prairie dresses. They added fringing to louche silk dresses and tunics and featured a host of hoodies. They’ve mastered the art of imbuing the haute-urban aesthetic with a playful, feminine frisson.

At present, Marques and Almeida are producing relatively accessible garments which, thanks to their sense of community, are connecting with a youthful audience. (This was made possible when they collected the LVMH Prize in 2015.) One needn’t look any further than the models who walked in the show to see their attitudes. Friends of the brand, magazine editors and models. The diverse casting skewered ethnic background and shape. Their aim is to “be the brand that can lead real change by focusing around its people.”

It is a widely-shared opinion amongst the British fashion industry that the threat of Brexit to business and the free movement of persons poses a threat to the fashion industry. In an increasingly divided world, Marques and Almeida’s optimistic message of community spirit and inclusivity felt as much relevant to today’s politics as it does to the brand’s vision.

Despite the discord between their designs and the connotations of Paris Fashion Week, perhaps it makes sense for them to show in Paris: London-based, Portuguese designers showing in Paris, France. (They even acknowledged the underlying Portuguese sensibility present in the collection, possibly denoting the “self-deprecating”, awkward quality to the silhouettes.) Fashion is a global industry and Marques’Almeida is hoping it’ll stay that way. 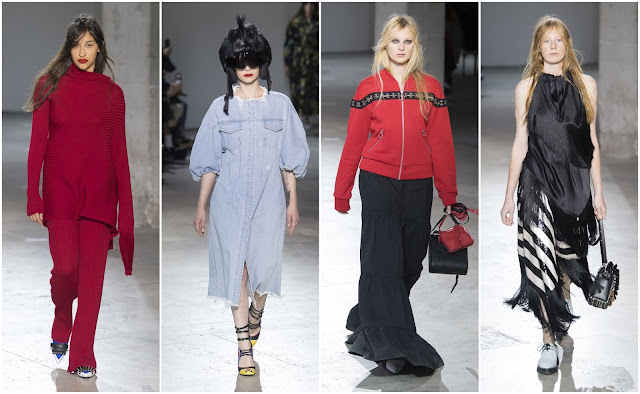