#ThisIsNotConsent - the Cork Trial, Consent, and the Spring 2019 Shows

“Does the evidence out rule the possibility that she was attracted to the defendant and was open to meeting someone and being with someone? You have to look at the way she was dressed. She was wearing a thong with a lace front.”

Those were the words from a barrister following a recent alleged sexual assault case in the Central Criminal Court in Ireland. Rallies took place across the country in protest against victim blaming yesterday. The vocal response to the trial comes after the man accused was found not guilty and the barrister touted a victim blaming stance.

Hundreds march through #Cork city to the courthouse where a 17-year old’s underwear was used by the defence barrister when addressing the jury in a rape trial #thisisnotconsent pic.twitter.com/4yqGcW6XPG
— Fiona Corcoran (@fiona96fmnews) November 14, 2018

Many women have posted images of their underwear to social media with the hashtag #ThisIsNotConsent. An Irish opposition leader, TD Ruth Coppinger displayed a thong in the Dáil, Ireland’s lower house of government, calling for an end to “routine victim blaming.”

It’s in times like this when the politics of one’s appearance enters an arena larger than the one originally intended. One thing should remain clear in all of this, there is no such thing as dressing like you’re asking for it. Consent is not a revealing dress. Consent is not a lace thong.

When the spring 2019 runway shows unfurled two months ago the biggest questions raised were those surrounding the portrayal of women. How should designers present women in a world which often fails to honour and represent them in the way it does men? Should designers adhere to a strict code of dressing women in protective layers of luxurious fabrics? Does the notion of dressing in an outwardly revealing fashion belong to a bygone era?  The language of how women present themselves was embedded in the narrative, whether designers looked to the beach for inspiration or if they issued direct feminist declarations. It was unavoidable. 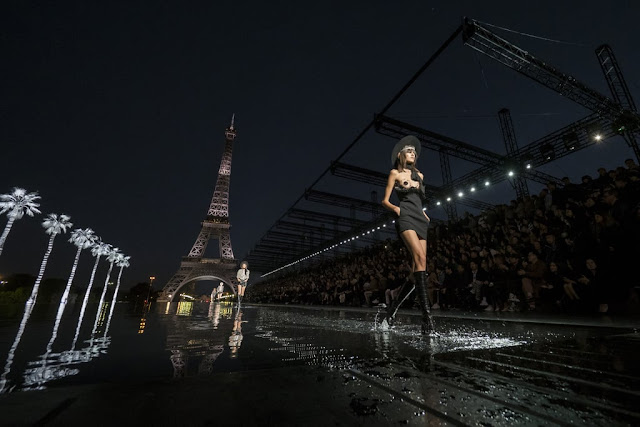 Anthony Vaccarello presented a collection for Saint Laurent, two days before Blasey Ford’s testimony, which exuded sexuality. The New York Times’ Vanessa Friedman heralded it “the second coming of sex” but continued that “showing the most leg, the most cleavage, the most sheer, made for a revolutionary statement back in the 20th century, but not a particularly nuanced or relevant one in the 21st.” It was replete with abbreviated hemlines, plunging necklines, and sheer fabrics.

The conversations both Saint Laurent and Celine instigated, however, stretched further than those around the representation of women.

When framed in what society considers to be a hyper-sexualised context—an expression of female physicality—women are subject to much more than the judgement of their fashion statements. They aren't 'asking for it' but that's how it can be viewed. Legal professionals can use women's attire as a means of supporting arguments, engendering victim blaming in the legal system, and claiming victory in court cases.

It's possible your clothing can be weaponised and used against you. Should dressing for a party or a night on the town be a political act? Should one consider the consequences of one’s outfit choice? The answer is a resounding no. Undoubtedly, what a woman wears revolves entirely around her bodily autonomy and her self-expression. But it appears, the shorter the hemline, the sheerer the fabric, the more likely women are to be subject to society’s sartorial despotism. How wrong is that?
Posted by Paulidoodles at 6:30 AM