Paul Costelloe's Song for Another Era 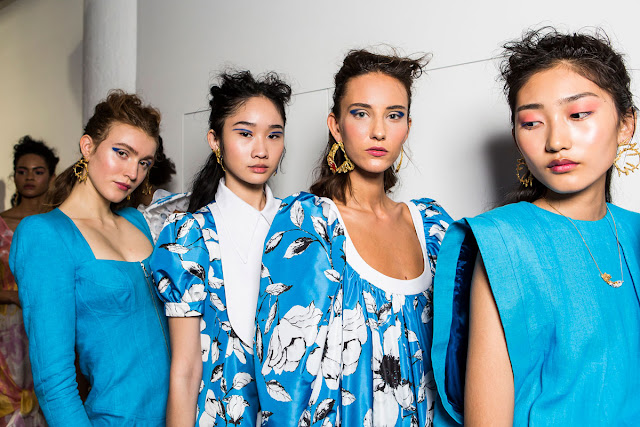 One could hazard a guess that Paul Costelloe went to see Mamma Mia 2: Here We Go Again this summer. At his Spring 2019 presentation during London Fashion Week in September, the show opened with the songs ‘Andante Andante’ and closed with ‘When I Kissed the Teacher,’ both of which appeared in the summer blockbuster.

The clothes had nothing to do with Mamma Mia, though. It was a “self-indulgent” passion project, as he told the Irish Times’ Deirdre McQuillan after the show. Fun. Just fun. Notwithstanding the slightly confusing musical accoutrements, this wasn’t a pantomime.

Costelloe melded the lives of the party girl, the businesswoman, and the ladies-who-lunch. The clothes he imagined for them will be made-to-order in his London studio. It’s all for the show. The main source of income for brand Costelloe is the licensing deal he has with the retailer, Dunnes Stores. It’s in Dunnes where consumers can shop his accessible clothing range and housewares. Paul Costelloe’s presence in the Irish retailer’s 136 nationwide stores that have woven him into the Irish fashion canon. The catwalks are just for show.

In parts of the collection, it felt as though he had thrown all three aforementioned ideas into one look. In others, he exercised caution, checking off the requirements to be something to each one without diminishing clarity. His evening wear was in fine form with some floor-sweeping gowns on show. They were new and they fit nicely amongst the tweed blazers and daywear. PVC jumpsuits, barely visible under blazers, and strikingly sixties baby doll dresses, on the contrary, felt impractical in the mix.

But Costelloe introduced oversized shoulder bags which could accommodate anything imaginable—a slight exaggeration but they were bigger than your average tote. The accessory was a worthy addition. 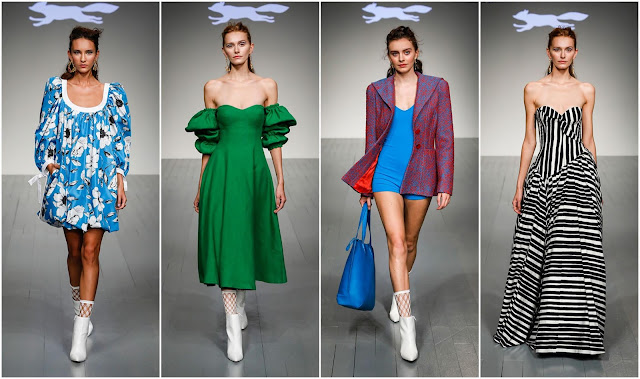 Photo Credit: Paul Costelloe
The Dublin-born designer’s eye for colour hasn’t faltered over the years. This time around, he fashioned a palette of azure blue, emerald green, and a deep pink. They delighted the eyes. They were optimistic in a time when spirits are low.

Something about the clothes—and those white ankle boots—belonged to a different era, one of riches and excess, champagne and frolics. (2018, according to popular culture, is about brisk business, practicality, and clothing as a form of protection.) For this critic, it called to mind the Celtic Tiger, Ireland’s era of economic prosperity and unadulterated decadence. It made one question: are these clothes outdated or are they renascent? Perhaps the day will come again when the leisure class bedecks themselves in custom Paul Costelloe, wearing their Irish pride and their social status once more.

In that sense, it was the most potent Paul Costelloe show in years.
Posted by Paulidoodles at 6:00 AM