Minki Cheng is from Hong Kong but research for his Spring 2019 presentation, shown at London Fashion Week in September, brought him to Lagos, Nigeria. He sought inspiration from Lorenzo Vitturi book Money Must Be Made, in which photographer Vitturi documented the panoply of colour in the Balogun Market on Lagos Island.

Thomas Bird’s set design at the show consisted of baskets, exercise balls, chairs, kites and balloons, rendered in every imaginable colour on the spectrum. It posed a childlike counterpoint to the clothes which were for the most part, despite the bold colouration, rather elegant and considered. 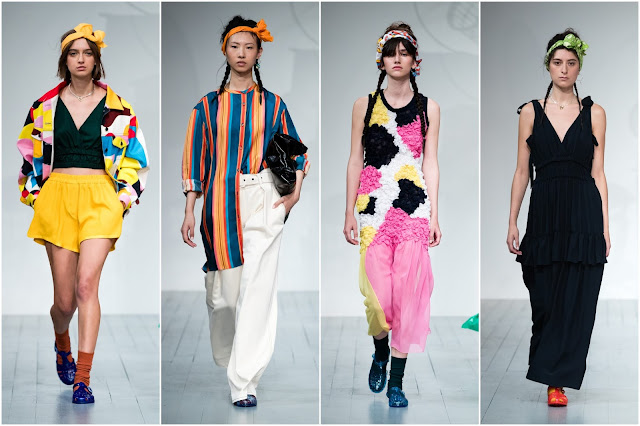 The show notes emphasised “the market is eclectic; selling an absurd amount of variegated goods with a constant flow of people, voices, styles, and gestures. The ‘randomness’ creates an exciting and edgy visual.” This rhetoric corresponded to patchwork jackets, nylon dresses, and raincoats, jelly sandals, and oversized bow-accented headbands.

Randomness often inspires chaos and this collection had that. However, because this was a presentation, where models stood sentinel, you could inspect the details, find the calm. ‘Ascalea’- and ‘cyathea’-emblazoned sweaters—references to fauna— were random and didn’t make much sense. They could’ve taken the more predictable root, opting for ‘Minki,’ something which would’ve increased brand awareness. After all, this is a fledgling label.

If this was a runway, it wouldn’t have worked. If it was a catwalk show, you would’ve missed the inventive reverse indigo denim jackets with visible interior panels or the saleable, multi-coloured, striped collarless shirts with roomy trousers in a shade of ivory. Those were the selling points but they were examples of how to pump joie de vivre into a sophisticated summer wardrobe.

Michael Kors spoke about ‘fashion Xanax,’ at his New York show, denoting fashion that assuages the fears and furies of contemporary culture—Cheng’s work landed on that same school of thought: optimism and jubilance prevail. There was a diverse cast to solidify his message.
Posted by Paulidoodles at 6:00 AM