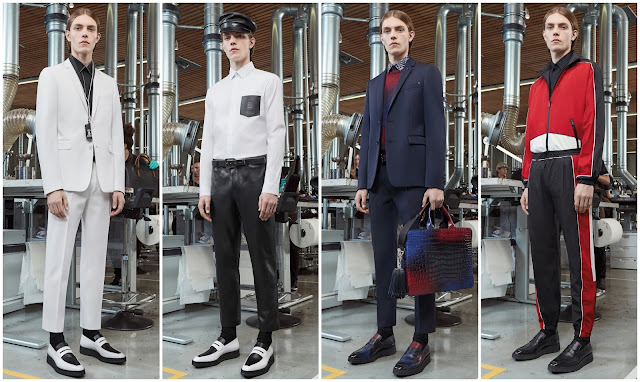 The lookbook for Kris van Assche’s debut for Berluti has arrived. It comprises of the kind of slightly detached, darkly romantic tailoring one can expect from the Belgian designer.

In April, van Assche was appointed the artistic director. He succeeds a fellow Belgian, Haider Ackermann, who, in his brief stint from 2016 to 2018, ushered in a reign of sumptuous, A promotional campaign photographed by Jamie Hawkesworth released in August was our first glimpse at his vision for the French house and the new logo. His full vision will be unveiled at Paris Fashion Week in January 2019.

The promotional campaign featured shirtless doe-eyed teenage boys with shoes hanging from their shoulders or draped around their necks. The focus is squarely on the accessories. As it is for spring 2019 when he updated the house’s styles.

Perhaps most interestingly, he introduces leather trainers which are, undoubtedly, an attempt at connecting with a younger consumer. They’re decidedly retro and in shades of scarlet and cobalt. But they made one think about Vanessa Friedman’s recent article in the New York Times about the zenith of sneakers in fashion: “When designers are making a sneaker just because they think they have to make a sneaker — because they are trying to carve off whatever slice of the sneaker market is possible — as opposed to because it makes sense for their brand, or their shopper, it’s time to stop.” Do sneakers make sense for the Berluti customer? Is there any real need for them other than maintaining an air of contemporary necessity?

Van Assche, a Belgian designer, served 11 years at the helm of Dior Homme. It was there he developed the aesthetic language of his predecessor Hedi Slimane. It was darkly romantic and consisted of rigorous tailoring. He furthered that image here, a cold departure from the warmth of Haider Ackermann’s preferred palette. For spring, he opted for a palette-cleansing melange of black, white, navy and red. The relative simplicity allowed one to focus on the fine tailoring. Even the tracksuit he had to offer was impeccably rendered by the house’s tailors.

Van Assche’s debut had fetishistic undercurrents. Leather trousers and baker boy caps recalled the homoerotic portraiture of photographer Robert Mapplethorpe. The nods were discreet and subtle which are possibly definable as the house’s codes.

Berluti’s identity as a fashion house is, as of now, relatively malleable. Ackermann spent only three seasons at the house. Before him, there was Alessandro Sartori but if you were to ask this critic to recall his work, he would be stunted. Berluti is arguably a blank slate. Van Assche has the luxury of shaping the brand’s contemporary image.

Photo Credit: Vogue Runway
Posted by Paulidoodles at 6:00 AM

Email ThisBlogThis!Share to TwitterShare to FacebookShare to Pinterest
Labels: Berluti