In Cork City, an Independent Retailer Thrives in an Underdeveloped Fashion Scene

It must be admitted, Cork is bereft of a fashion scene. The nucleus of Irish fashion is firmly placed in the country’s capital city, Dublin. This is where major publications, luxury retailers, fashion events, and the best fashion colleges are based. Cork, Ireland’s second-largest city in terms of size and population, falls short in its offering.

However, there is Samui. 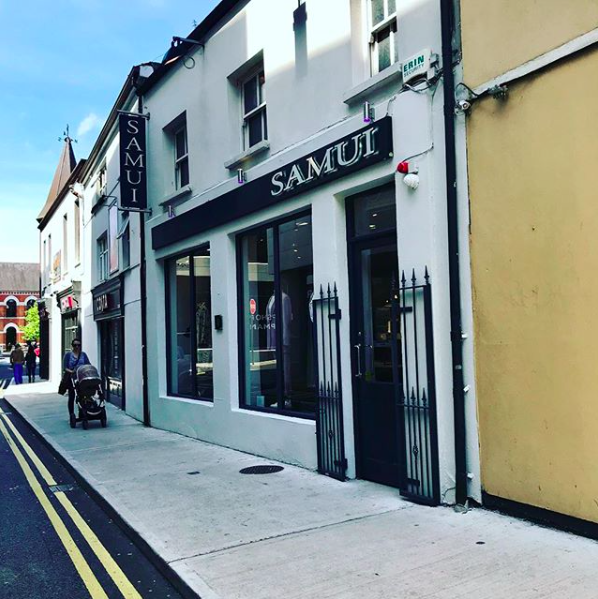 Samui is Cork’s only independent retailer which offers a mix of contemporary brands and high-end designers. It is located on Drawbridge Street, adjacent to the main thoroughfare of St. Patrick Street. It’s sandwiched between a coffee shop and a men’s tailoring store and it’s a stone’s throw from the Crawford Art Gallery and the Cork Opera House. The boutique is unassumingly situated, a narrow storefront which belies the actual size of the two-storey building.

The window is lined with four mannequins. In a given season, they wear Rick Owens, T by Alexander Wang, P.A.R.O.S.H., handbags from 3.1 Phillip Lim, and shoes from Golden Goose Deluxe Brand or A.F. Vandevorst.

Samui was founded in 2001 by Clodagh Shorten, the owner. Prior to opening Samui, she worked at upmarket retailer Monica John which opened in 1979 and closed its doors in 2012. On the Cork scene, Monica John was a self-declared trend arbiter with stores across the county. She spent 18 years there learning the inner-workings of sales and management which she transferred to fashion buying, ushering the clientele towards something new.

“Having worked at Monica John in Cork City for almost 18 years, I was hungry to go it alone. The offering of independent stores in Cork City was very limited and I really wanted to create a space with a cool vibe and bring both well-established and innovative emerging brands to Cork,” says Shorten. 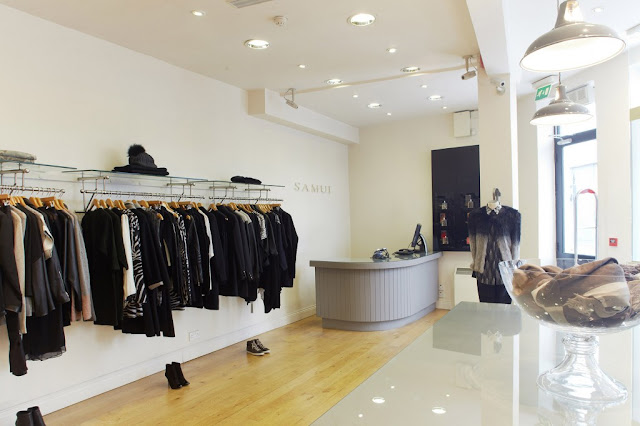 On August 23, Mary-Claire O’Sullivan, the store manager, ushers me around Samui. The store is anticipating the arrival of the remainder of its Autumn/Winter 2018 collections which have been trickling in since the beginning of August. “The drop is at 70%,” O’Sullivan says.

O’Sullivan joined Samui ten years ago. Like Shorten, she earned her stripes at Monica John. As the store manager, she is responsible for buying the collections which are in store. She is lively and dressed in Pleats Please by Issey Miyake, one of the store’s many collections. She notes the denim jacket she’s sporting is uncharacteristic. “I’m always in black.”

We scan downstairs which is where most of the contemporary level brands are housed, for example, Moncler and Acne Studios. The term ‘contemporary level’ is used to describe the brands that are secondary to luxury brands. Typically, they are lower-priced, making them relatively accessible, and use more common fabrics. 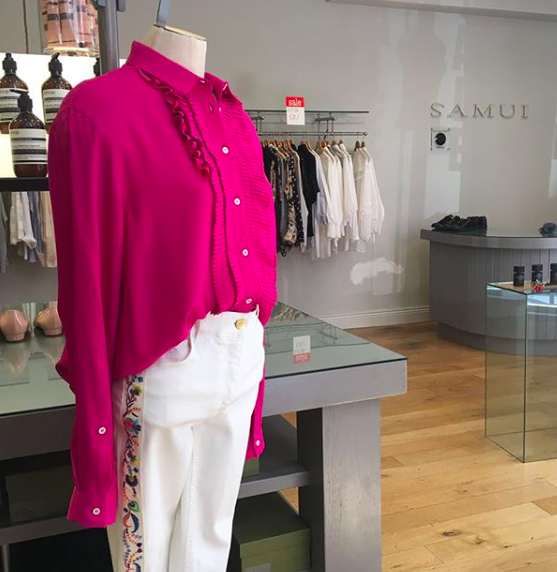 Upstairs is where the more ‘directional’ labels are situated. The term ‘directional’ denotes brands who formulate an idea around a collection, they land with a higher markup and a degree of piety. You have your holy grail names: the trinity that is Rick Owens, Dries van Noten, and Chitose Abe’s Sacai—innovators, unparalleled creatives who eschew from wavering to the whims and conventions of the fashion industry. There is also No. 21, Roland Mouret, and Acne Studios—they don’t have the same level of godliness in the industry-at-large but O’Sullivan speaks as highly about them.

“Samui was built from scratch. I started with just the ground floor space and I spent many days working on my own,” says Shorten. “I sourced unknown brands from Italy and France, most of which were exclusive to the store. It was a scary, intimidating period but before long Samui became recognised as a one-stop shop.” 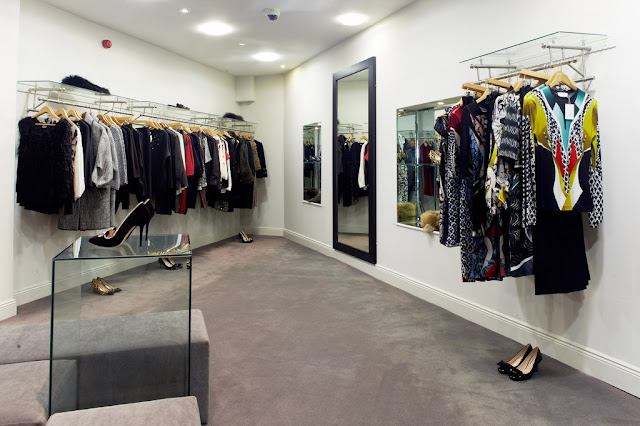 The only other retailer offering designer wares in Cork is Brown Thomas, the second-largest outpost of the Irish department store chain. (It’s owned by the Selfridges Group which also owns Holt Renfrew in Canada and Selfridges in London. The Brown Thomas flagship is in Dublin.) However, there are few overlaps between Brown Thomas and Samui--Roland Mouret, Moncler, Paule Ka, and J Brand being some of them. Moreover, Brown Thomas Cork boasts a large beauty hall, and includes a menswear, accessories, and homeware departments. Samui is selective with their accoutrements to womenswear—there is Aesop skincare, Fornasetti housewares, and Astier de Villatte candles.

Largely, the brands stocked in Samui are nationwide exclusives.

It’s in London, Milan and Paris where Shorten and O’Sullivan compile edits in showrooms and deliberate what will appear in the store six months later. They negotiate price points and, together, they attempt to find the best-fit product and often shop with specific customers in mind--‘Customer X will want this, Customer Y will require that is the mentality.’ 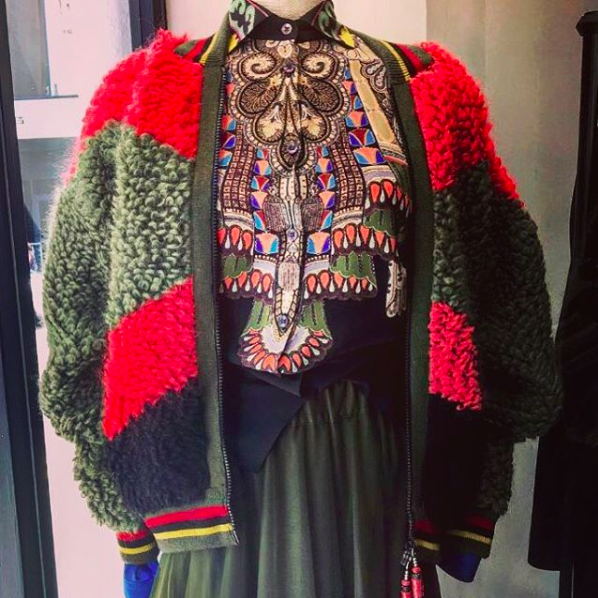 O’Sullivan sashays towards Erika Cavallini’s work. She is effusive about it—she commends the “contrary” approach to shape and the quality of the cut. Another Italian brand, No. 21 is amongst her personal favourites stocked in the store. She withdraws a multi-coloured striped wool sweater from the rail and admires it, asking, “who wouldn’t want to own something like this?”

Italian designers maintain a heavy presence in Samui. The biannual trip to Milan Fashion Week, in February and September, encompasses visits to the showrooms of No. 21, Erika Cavallini, Golden Goose Deluxe Brand, and Etro. “The Milan trip has become a beast in itself,” O’Sullivan shares.

However, it’s not Milan but Paris Fashion Week that counts the most. “Paris is where most of our business takes place,” says Shorten. They pay visits in February and September for fashion week, and January and June for pre-collection buying. In the past couple years, the store has began to sell an increasing amount of pre-season—it’s generally more commercial and “it typically makes up 70% of [their] buy at [selected] labels.” Paris is where they purchase Rick Owens, Dries van Noten, and Sacai, amongst others. “At the bigger labels, the minimum spend is 20,000 or 30,000,” says O’Sullivan.

O’Sullivan points to the Dries van Noten rail, highlighting a cardigan with faux-fur and ostrich detailing. “It’s incredible,” she says. Secondly, she selects a patterned long-sleeve, calf-grazing shift dress. “It’s definitely for a more discerning customer with a deeper understanding of the brand. They’ll be comfortable with the higher price point and it’ll last forever.” 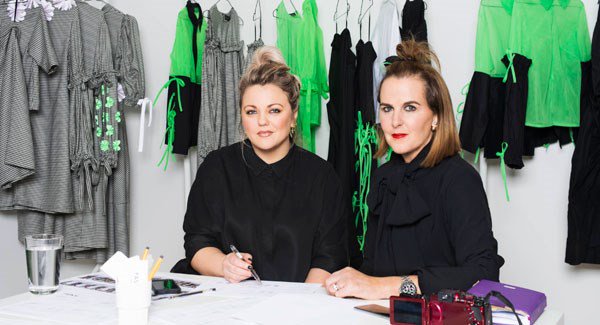 The biggest question is, though, who is buying luxury fashion in Cork, a predominantly working class locale?

“They’re professionals who work in corporate environments—in finance, media, the pharmaceutical industry,” says O’Sullivan. “We haven’t met some of our customers, we maintain telephone relationships with them. We have customers across the country”

Cashmere, denim and trainers are reliable, not only for customers, for Samui. They’ll equate to significant turnover. The high-end brands are a tougher sell and, therefore, a greater risk. But, it’s these high-end brands that allowed Samui to weather the financial crash. Of course, they admit there have been mistakes but generally it takes them three seasons to narrow down their edit of collections and know what works for their clientele and what doesn’t.

Other upmarket boutiques in 2009 and 2010 evaporated, succumbing to the pressures of the financial crisis. “When the crash hit, we decided to elevate. Other retailers were focused on attacking the mid-market, contemporary level but we aimed higher,” says Shorten. Samui was the underdog, unsuspectingly weathering the storm.

“[The excess of mid-market offerings] confused consumers. Our customer would’ve responded with, ‘why isn’t Samui there for me?’ if we did the same,” adds O’Sullivan.

Post-downturn, the Irish economy continually improves. In 2017, IDA Ireland reported that Ireland was the fastest-growing economy in Europe and the 6th most-competitive in the world. Culturally, the Irish are becoming more interested in fashion, perhaps due to recent success stories with fashion designer Simone Rocha and Glamour editor-in-chief Samantha Barry (a Cork native). Cork could begin to follow in the footsteps of Dublin as a fashion destination, as it continues to develop, realising its potential as a well-established second-city. 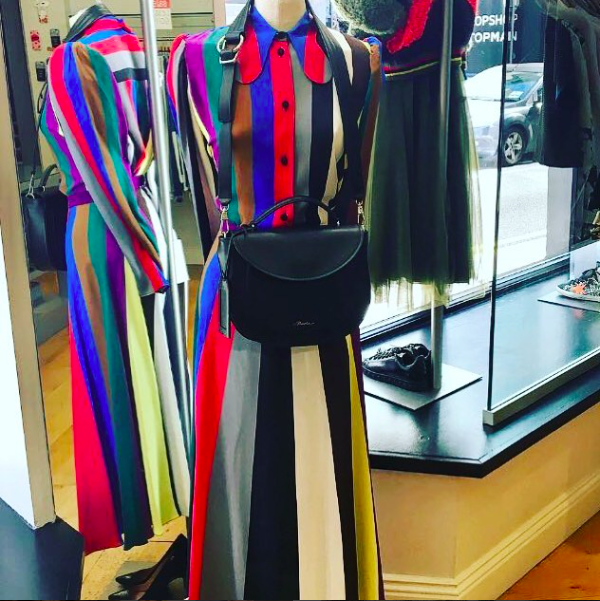 Amidst a sea of online retailers--for example, Net-a-Porter, Farfetch (who recently filed for an IPO in London), SSENSE--Samui is lobbying for the survival of bricks-and-mortar. “What we offer is an experiential, tactile service which is better than the dopamine from an online click,” O’Sullivan says. “Customers enjoy the experience of coming into the store, interacting with the product, feeling the materials and getting a sense for what they’re buying.” Would Samui ever consider launching an online retail platform? “I don’t think so,” Shorten says, resolutely.

As the store approaches its 18 year anniversary, Samui’s survival is a testament to the rewards of unflinching risk, it’s a balance of intuition and practicality, and a frightening degree of instinct. Samui has managed to cultivate a breeding ground for designer fashion of the expensive—very expensive—kind in a city with a relatively underdeveloped fashion scene.

“I think we’re adrenaline junkies,” says O’Sullivan, “but if we didn’t offer directional fashion as well as the bread-and-butter reliable jeans, comfortable knitwear, and cool trainers we wouldn’t be where we are today.”

Photos from @samuicork on Instagram, samuifashions.com and the Irish Examiner

Email ThisBlogThis!Share to TwitterShare to FacebookShare to Pinterest
Labels: Feature