Made in America: American Brands Play with Their Identity // Spring 2019

Despite the looming threat of rain on Wednesday morning, Laura Kim and Fernando Garcia took the Oscar de la Renta show outdoors, to the rooftop of Spring Studios. Consequently, it was amusingly ironic that their Spring 2019 effort was comprised of summer-appropriate attire. It was light, effervescent, brightly-coloured. They updated the house codes with some interesting kaftan-inspired garment hybrids.

As with many of their previous outings, Kim and Garcia got too caught up in enforcing youthful practice in lieu of considering the multiplicity of directions the house, which they know so well, can take and has taken.

The late, eponymous Oscar de la Renta—Kim and Garcia’s teacher—balanced the demands of his younger clientele with the more mature audience. They should glean more from the archives because it worked for them in parts: take the gold column gown Bella Hadid wore in the show’s denouement, or the black, one-shouldered gown Gigi Hadid closed proceedings in; they had sex appeal but the uptown sophistication intrinsic to an Oscar de la Renta ensemble. They’re getting there.

Wes Gordon’s Carolina Herrera debuted the morning before. Gordon arrived a year ago but Spring 2019 marks his first official outing as sole creative director. The eponymous Herrera was front row watching her successor’s vision unfurl. Largely, it was much the same. “Happy clothes” is how he explained the vibrant colours, bold patterns, and abbreviated hemlines. It was decidedly youthful but not awkwardly so. He didn’t alienate the existing clientele. As he ushers in the next generation of Carolina Herrera clients, he should consider modernising his efforts, adding a contemporary verve. It was dated.

In the canon of American fashion, Stuart Vevers, a British designer, got lucky with Coach 1941. He was allowed to cultivate the identity of the ready-to-wear at the brand. Until he arrived four years ago, in 2014, the ready-to-wear didn’t have an impact on the fashion industry. Nowadays it’s one of the hottest tickets of New York Fashion Week.

Vevers understands Americana. As an outsider, he brings an unbiased perspective to the narrative that Americans can’t.

This show’s influence was veritably post-apocalyptic. The scene could’ve been borrowed from Mad Max. He transplanted the prairie narrative that has underscored his recent collections to a desolate, industrial-looking desert. His version of the American Southwest was battered by desert winds and besieged by bitter temperatures.

It is Coach, after all, so things were softened in part with cartoon screen prints on hoodies and decorative patchwork displays on sweatshirts, but the overall frame of mind was rooted somewhere sinister. The models didn’t look vulnerable. They didn’t look daunted by threat. They were adequately equipped for the danger that awaits. 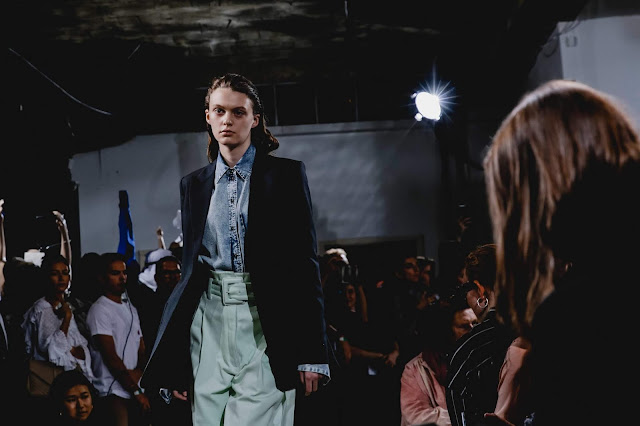 The same could be said for Proenza Schouler, who marked their return to the New York Fashion Week schedule on Monday evening. Jack McCollough and Lazaro Hernandez, co-creative directors, unveiled a new chapter in the brand’s history with an austere palette of slate grey and charcoal.

(The design duo spent two seasons in Paris. “New York will always be home,” they said in a statement released on Instagram, in June. “Paris was an amazing opportunity to show what we do to a completely different audience that had never been able to attend a Proenza Schouler show and on that level, as well as on a creative level, it felt really right.”)

There was a loftiness about the models’ brisk pace, charging past like a lightning bolt before you could survey the entire outfit. It captured the post-industrial mood that skewered their oeuvre pre-2017. They eschewed from the couture heights they aspired to in France—gone are the frills, froth, and fancies. They were replaced with bleached denim and metallic, shock-blanket-style shirts and waistcoats. The clothes, like futurist Americana attire, meant business, as purposeful as the models’ stomp, and prepared for anything life might thrust towards them.

The brand’s update includes a lower price range; things are cheaper now which is an effort to make the brand more appealing to potential customers. The clothes are a fraction of the former prices. Not only this, they’re now made in America. I’m sure President Trump would be satisfied if he knew this. 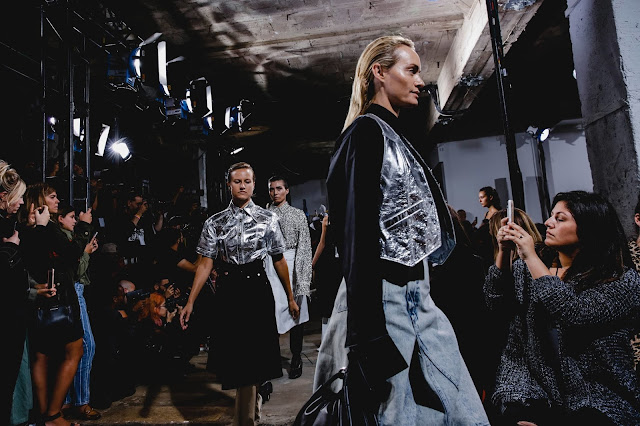 Posted by Paulidoodles at 10:30 PM