To ascribe the word ‘Mapplethorpian’ to the oeuvre of French menswear designer Ludovic de Saint Sernin is to encapsulate his aesthetic: inherent beauty with throbbingly sexual undertones. It is true: his work evokes Mapplethorpe, a reference he openly admits. In previous seasons, his work has been inspired by Patti Smith’s Just Kids, the 2010 autobiography which documents the author’s relationship with artist Mapplethorpe. His leather lace-up boxer shorts wouldn’t look out of place in a Mapplethorpe photo either. 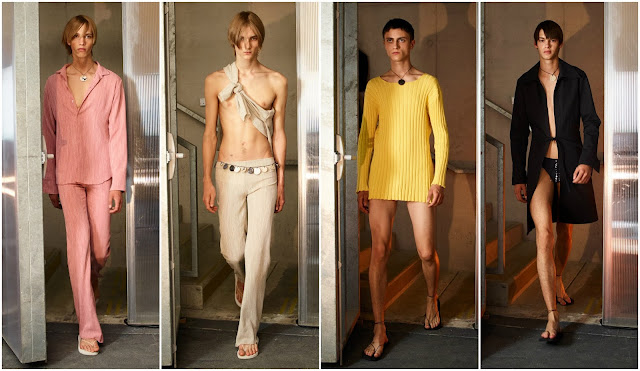 Although it might be a reductive comparison, it seems Pieter, designed by Sebastiaan Pieter, which used to show in London, was the litmus test—how ready was the menswear industry for the vision of a gay man designing through an erotic lens. Pieter made subtle references to Grindr, the gay hook-up app, ‘masc’ stereotypes. In a couple of years, society has developed into a relatively more open space and queer culture is more prevalent. Pieter’s work, which survived until June 2016, was laced with sexual suggestion but it didn’t catch on with consumers. de Saint Sernin’s work possesses a romantic edge, a softness which contrasts with the leather and lace-up accents, and he’s recently launched womenswear which gives him another chance at lasting.

But beyond the sex is a simpler concept: purism. (It's an attribute he borrows from Mapplethorpe.) His Spring 2019 collection, ‘Summertime Sadness,’ loosely inspired by Call Me by Your Name, was comprised of simple silhouettes. There was nothing challenging in terms of design or concept but it conveyed the mood succinctly, in 15 looks. There was leather and denim and ribbed wool. It was summery in shades of blush, lilac, canary yellow and azure blue—dusty shades invoking nostalgia.

There are whiffs of French designers past in his work. Paco Rabanne, namely. The way de Saint Sernin splices together patchworks of leather—on a pair of daring trousers—is reminiscent of how Rabanne bonded chainmail. Copyist watchdog DietPrada were quick to flag nods to Geoffrey Beene, the esteemed American fashion designer, on Instagram about the collection. But de Saint Sernin’s point of view is uncompromising, and it’s clear based off his Instagram where he headhunts models.


Sex sells but this is sex like we haven’t really seen it before—it’s not hyper-sexualised machismo, the kind you’d associate with a Dolce & Gabbana fragrance advertisement. It’s fetishistic of the post-Timothée Chalamet man—slender, sinewy and obsessed with doe-eyed youth.
Posted by Paulidoodles at 3:05 PM