At London Fashion Week, a densely-packed schedule can include more than eighty names. That’s just the British Fashion Council’s official schedule. Unbeknownst to many, there are plenty of off-schedule displays from established names. In February, Phoebe English wove a spellbinding story surrounding the loss of her grandparents in the Clerkenwell neighbourhood on a Friday night and Ports 1961 commented on the internationalism in the bowels of the Tate Modern on a Saturday afternoon. Emerging name, and a favourite of Rihanna and Björk, Micol Ragni showed in a car park one evening—the Italian will join the official schedule for Spring 2019.

Fashion Scout, an independent showcase, enlists a number of emerging and established names and puts them under one roof—the Art Deco Freemasons’ Hall near Holborn and the BFC’s venue on the Strand. The event runs throughout London Fashion Week. While most of the fashion pack in senior positions flock to the official schedule, Fashion Scout attracts energetic eccentrics in the early stages of their fashion careers—the mile-long (an exaggeration but they look endless) queues are replete with bloggers, photographers, and stylists-in-the-making.

There were a few presentations I caught off-schedule this year, some are below. Where most of them stunt themselves is in their emphasis on concept. Creativity runs amok which can be a pleasure to watch but also incredibly bemusing. What are they trying to achieve with esoteric references and overwrought notions? Style over substance. 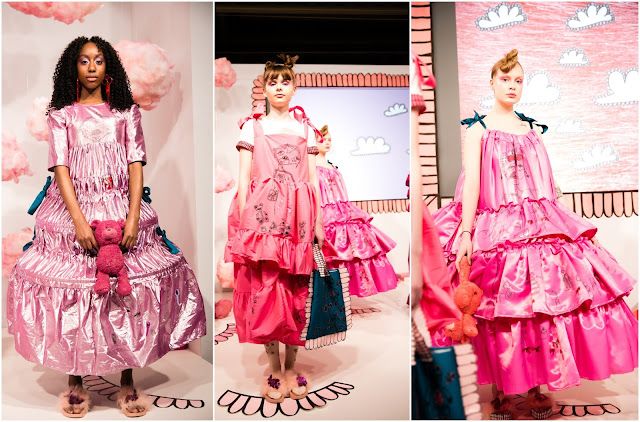 Leeds isn’t exactly the most fashionable city but Amy Thomson emerged from there. The designer/illustrator studied at the Leeds College of Art and she recently returned for the Leeds International Festival Showcase. Her collection featured eight looks and they explored “youthful aspirations." She was thinking about childhood dreams and the unknowing eyes of an infant when perceptions of the world are tinted with naivety.

She touched on the aesthetics of kitschiness—something which most twenty-somethings are drawn to nowadays, it seems—which felt relevant in the current climate, but also true to the reference to youth. She used cerise and fuchsia, eye-popping colours that cemented the idea of rose-tinted glasses.

The childlike sensibilities she endeavoured to capture were an obvious reference. With widespread political upheaval, it’s times like this when designers are reverting to childhood and adolescence as a method of resolving with the turmoil.

What distinguished Thomson from her contemporaries was her illustrations. This is where she possesses a raw talent. 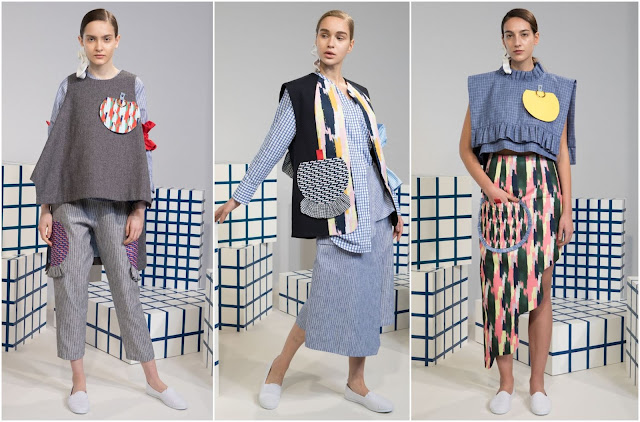 Malaysian-born, Australia-raised, and London-based Cassey Gan also walked a well-trodden path with her Fall 2018 show. It was about “how social media has brought us to create fictional versions of ourselves in the pursuit of perfection.” She continued, “As beauty standards become more pronounced, the line between fiction and reality becomes blurred and we tend to forget our true selves.” It’s a deeply conceptual trail and only the mastery of John Galliano at Maison Margiela has successfully portrayed the millennial condition in a fascinating way.

Gan, aside from her investigation into the facsimiles of Instagram, looked at Maria Svarbova’s photo series ‘Swimming Pools.’ The photo series, a Google search later, reveals itself to be quite spare—contrasting bold hues with mundane subjects. (This was better but kind of random. The connection between the remnants of Slovak communism and the social media age didn’t make the slightest sense.) It was the nods to Svarbova’s work that proved to be her strong point. She lobbied for bright patterns and interesting linear cuts which resembled architecture. She juxtaposed tonal pieces with prints and layered fabrics quite nicely, reflecting the photo series’ compositions. There was a ritualistic ceremony taking place at the beginning of Ilaria Lepore’s presentation, on the Monday afternoon, with burning incense and interpretive dancing.

Supposedly the use of cotton, wool, and leather was set to “challenge mainstream fashion norms.” Where was the challenge?

Her work wasn’t as bold as it was marketed. She’s on the right track in that she’s not shy to sidestep conventionality in terms of gender politics and sexuality but the ideas she’s proposing don’t seem as countercultural or shocking as they would have a number of years ago. Perhaps a bolder expression awaits.