In London, Faustine Steinmetz experimented with a runway show but the provisional schedule for next season’s instalment of London Fashion Week reveals she will be hosting a two-hour-long static presentation. Why the presentation is a more favourable milieu in which to situate her work is rooted in craftsmanship. Steinmetz’s ‘couture-denim’ isn’t suited to the blink-and-you-miss-it fashion show. Five minutes is not enough time to examine twenty-two looks whizz by. Five minutes with her work should be spent inspecting the sheer quality of it, in a purpose-built set and not an anonymous venue.

The result of her past two collections, as visually and viscerally impressive as they’ve been, has not been as impactful as previous season, where shows have been staged in conceptual environments.  With a catwalk show you can grasp a feeling but you can’t really get a sense of the work embedded in an individual look. 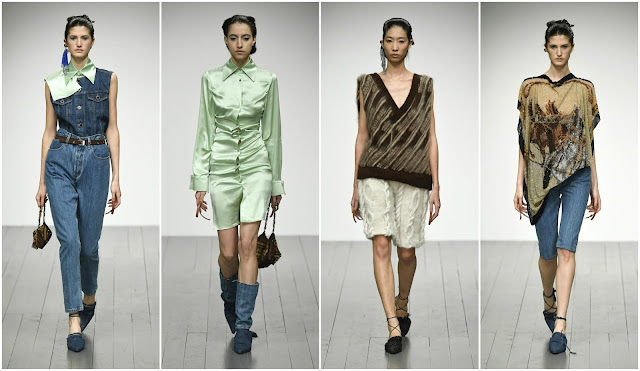 Her Spring 2019 was inspired by the bon chic bon genre (French for ‘Good style, good class’) denizens of Paris. A French designer, Steinmetz reimagined the affluent in the 2000s and their Hermes scarves, Levi’s jeans, trench coats and Fendi baguettes. It’s an extension of last season’s exploration of the cultural significance of certain items of clothing. In an era of bucket hats and fanny packs, her appropriation of reliably stylish garments felt refreshing.

There was felted denim, deconstructed denim, silk and crushed silk. Silk scarves were encrusted with Swarovski crystals. Argyle sweaters were felted. Everything was familiar but nothing was the same. She managed to alchemise the tropes of modern fashion and present them in a new light. If nostalgia is the name of the game to sell and to generate likes on Instagram, this is how you successfully bring something new to the table.

For a designer whose career is based on craftsmanship over concept, presentations are the way to go and it’s clear she’s aware of that.

Posted by Paulidoodles at 11:40 AM