What began as a playground of concept has slowly filtered into a sellable vision of high-quality garments. We’re talking about J.W. Anderson, the much-lauded Northern Irish design, whose artful creative streak captured the hearts of his stalwarts over the past ten years. It became strikingly apparent this is well and truly the New JW at his Fall 2018 show in February, where he consolidated his menswear and womenswear.

In previous years, especially those predating his appointment at Spanish leather goods house, Loewe, Anderson designed for a man and woman encased in a conceptual milieu, where oddities were common than practicalities. It was visceral and arresting, sometimes even frustration. In essence, it was akin to a tormented art student trying to figure out who they wanted to be. Nowadays, it’s mostly levelled out, it’s more mature and, in turn, generally more wearable. 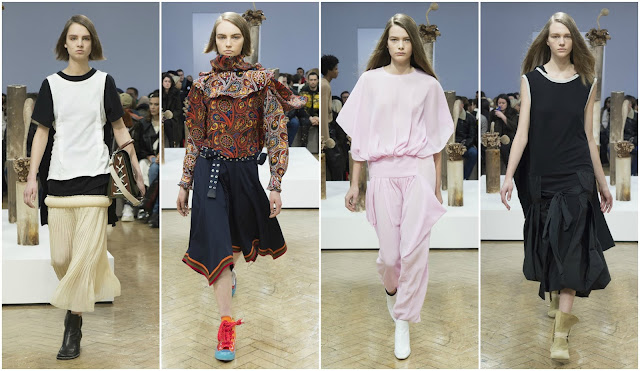 Anderson has a knack for mingling different historical reference points. This time around, he fused a Victorian-inspired paisley patterned high-neck blouse with a handkerchief skirt, a belt with a coin purse. There was a dress with a narrow waist and full skirt had exaggerated darting on the bodice—it felt like a confused mishmash of Azzedine Alaïa’s sculptural dresses and Elsa Schiaparelli’s ‘Skeleton Dress’ with its surrealist imprint of a ribcage, but interesting nonetheless.

As fashion designers wrestle with what vision of female identity they should portray in the post-#MeToo era, Anderson’s message is about ease. The flowing silhouettes accommodate liberation but, to remain true to his aesthetic, feature eccentric idiosyncrasies like odd folds on trousers and drop waists belts on coats which muddle his message. Not everything is relaxed, there are complications—usually confusingly placed accents like bows at the thigh, asymmetric zips, and oversized ruffles at the neck.


It coalesced quite nicely with the menswear—also rendered in earthy tones. He nodded to the professional, the sailor and the hipster, in a playful casting of stereotypes. He continued to balance the more juvenile designs with ones catering to the sophisticate. It’s taken him some time to find his footing in the commercial landscape of menswear, but like his womenswear, it’ll never be as electrifying as Fall 2013, when his men wore frilly bum shorts and truly stirred audiences. One hopes that era will reemerge. 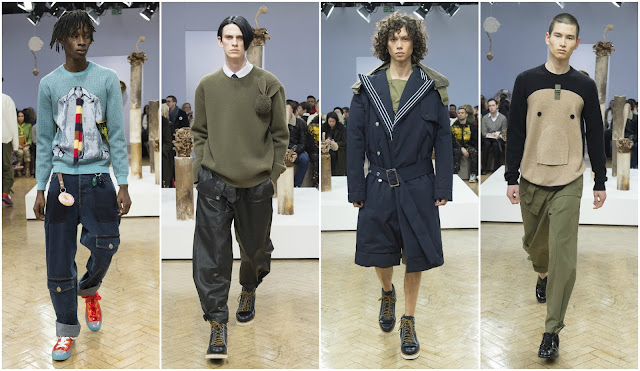