In Paris, Haute Couture Shares the Spotlight with Ready-to-Wear & Resort

Uma Thurman sashayed down the marble runway in cat-eye sunglasses and a duchesse satin floor-sweeping overcoat. Moments later, she vogued again revealing a shimmering leopard print gown with an emerald bodice. The actress had turned model for the night. She was joined by actresses Kate Bosworth, Rowan Blanchard, Chloë Sevigny, and socialites Suki Waterhouse and Alexa Chung. It was Miu Miu’s Resort 2019 show in Paris, on a balmy Saturday evening. The clothes were characteristically flirty with marabou accents, delicate embellishments, and graphic prints and possessed a whimsical, youthful zest, revelling in their meaninglessness. 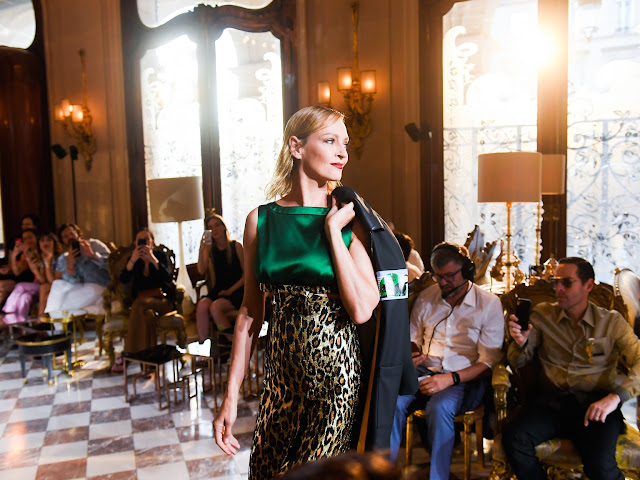 The haute couture shows in Paris officially began yesterday morning and continued to subvert expectation. It is no longer a week reserved solely to the august houses who spend thousands of hours on handcrafting ball gowns for the über-rich, the business tycoons, and princesses. Miuccia Prada’s Miu Miu wasn’t on the official Fédération de la Haute Couture et de la Mode schedule but her fashion show was the unofficial, starry opener of the week’s proceedings.

Sonia Rykiel were also unlisted on the schedule but coincided the debut of their L’Atelier collection, a made-to-order line, with couture week. In a cloistered courtyard at the Beaux-Arts de Paris, creative director Julie de Libran continued to exhibit her acute awareness for the house’s codes with a distinctly Parisian display, comprised of darkly glamorous attire tinged with the 1980s. Power suiting was one of the main propositions, sans chemisier, and clouds of marabou adorned berets. The rebellious bride wore jeans and a glittering ivory corset, recalling something Carrie Bradshaw might wear in 2018.

Acne Studios, Hermès, and Vetements showed too further evincing the loosening grip of tradition. Of course, none of them were on-schedule, but that doesn’t matter anymore. Hermès, like Miu Miu, showed Resort 2019, upstairs at their Paris flagship. Acne Studios and Vetements presented Spring 2019.

Vetement’s Demna Gvasalia elicited terror from his audience. It wasn’t just the venue, underneath a motorway, but his fetish references, consisting of models wearing leather masks and stomping thunderously in frightening procession.

Post-Soviet youth culture, Gvasalia’s gambit, exploded on the runway to a soundtrack of thumping techno. There was punk plaid, military camo, garish tablecloth prints, and roughened leather. Bootleg denim and oversized tailoring, familiar Vetements propositions appeared elsewhere. There were explicit nods to Georgia, his native country with the flag appearing on an anorak. (Ukraine was also given a nod.) It was abrasive both in its brash styling and the strut of the models. The nationalistic militarism was both violent and pertinent for the modern world.

The most amusing was the tablecloth-print dress bracketed by a Russian flag coat and a Stars and Stripes jacket. Trump and Putin’s conference in Helsinki in July, anyone?

Vetements, which is also the French word for clothes, is the antithesis of couture. It is just that: clothes. Product. It is a commercial success and wryly toys with its customers’ expectations and anything it produces rapidly becomes a cult item. The Georgian flag in the Pride colours with shoulder pads? Next season’s bestseller. But it comments on the diametric between the youth of today suffering from political oppression and the moneyed seated in tony enclaves in the 1st. 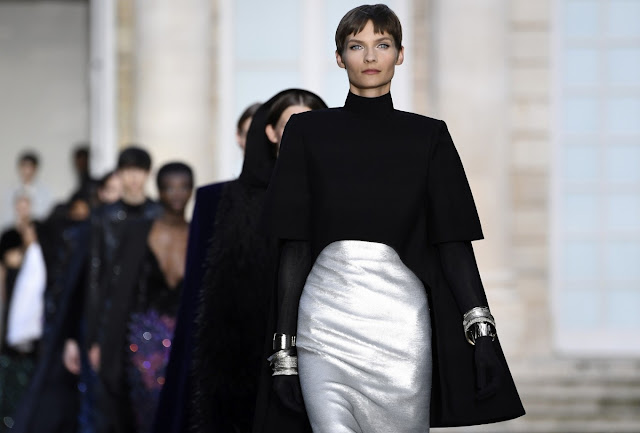 It starkly contrasts with Claire Waight-Keller’s Givenchy, a storied couture house helmed by a British designer who counts royalty like Meghan, Duchess of Sussex a fan.

Off the back of the recent Royal Wedding coup, artistic director Waight-Keller returned to the atelier to conjure the Fall 2018 haute couture collection. Her show at the Archives Nationales was one of the first couture collections to be presented.

She issued an homage to the founder, Hubert de Givenchy, who passed away in March, following her sophomore Paris Fashion Week outing. She scoured the archives and plucked references from Mr. Givenchy’s oeuvre which is punctuated by glamour with a capital G. He was a man who appealed to women like Audrey Hepburn who appeals to women of today for her perennial sophistication and elegance without having to simultaneously perform the role of ‘sex symbol’. Her models wore kitten heels, trousers, and were modestly dressed in gowns, capes, and suiting that will allure an audience with an appetite for couture that is both timeless and modern.

Encompassing the 1950s to 1970s, Waight-Keller re-edited many of the founder’s staples and rendered them anew, for a modern audience. While it wasn’t as evocative as her debut couture show in January, the craftsmanship was nevertheless spellbinding. (Les petites mains, the craftsmen and -women who work on the collection, emerged for the final bow, along with the artistic director.) The technicality of the collection is almost incomprehensible. The atelier spends thousands of hours labouring on garments which act merely as a proposition for the wealthy, prospective customers front row who will subsequently adapt the pieces to meet their requirements.

It made you wonder: What will become of the white column gown dripping with feather embroidery, enveloped in a futuristic cape? How will the pailettes and ostrich-feather evening gown transform to suit the guest from Middle East or the China? And the square-shouldered metallic, military-inspired top with cigarette trousers, will it exist as presented or altered to become a dress or gown? We’re likely to not be privy to this information. Couture is a closely-guarded world, and the relationship between designer and client is a secretive exchange founded on discretion and privacy.


From pre-collections to ready-to-wear to haute couture, the past 48 hours has marked the diversified nature of the fashion schedule. You don’t have to be a couturier to present couture. You just have to show up in Paris in January and July and hijack the schedule. But at couture week, where escapism is the name of the game, only a couturier has proved themselves capable of achieving that thus far.
Posted by Paulidoodles at 9:00 AM