Perhaps one of the most odious concepts to emerge from the digital age is ‘Big Dick Energy,’ which doesn’t refer to a well-endowed human but, according to the Urban Dictionary, the internet’s lexicon of epithets and in-jokes, is “confidence without cockiness… It is the sexual equivalent of writing a check for $10,000 knowing you got it in the bank account.”

Op-eds appeared in highly-regarded newspapers like the Financial Times decoding the meaning of the Twitter phenomenon. ‘BDE,’ as it’s affectionately known as, is reserved for the kind of confidence few possess but if there’s a blatantly obvious example of it in the fashion industry it’s Dilara Findikoglu.

Findikoglu’s utopia for women empowerment unfurled at her London Fashion Week catwalk show at the gilded Banking Hall in February 2018. She described her models as “hypnotic sisters” and “celestial women.” 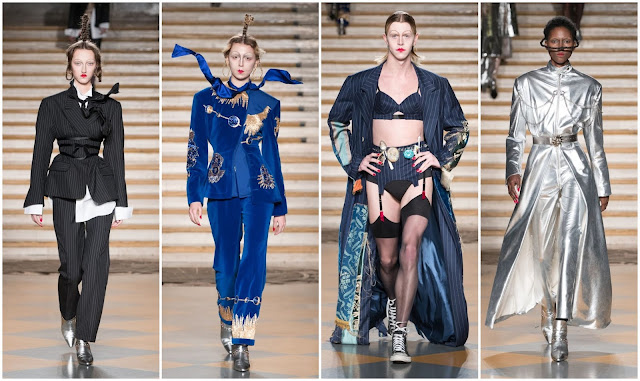 “We will no longer operate within your matrix of power. We choose instead [to] live free. We yield to none in our appreciation, wonder and respect for woman,” read the Dilaratopia Manifesto. Dilaratopia is the Turkish designer’s world. “We recognise their celestial and mysterious qualities, how their grace and power advance humanity and our ascendance from the patriarchy.”

Findikoglu’s vision is somewhat restrictive. Corsetry and bustiers have become her signatures. This season she exhibited some tailoring options. There were sightings of men’s tailoring—pinstripe suits you’d expect from Saville Row. She should imbue her work with more of this.

What’s apparent is a sense of empowerment, defined by the models’ domineering strut. Findikoglu is preaching to the converted—in this case, the empowered.

Findikoglu’s designs are influenced by historical dress. Her concepts date to the 18th century but there’s something modern about why she’s doing this. In this era, women were rendered powerless by their male counterparts. In presenting clothes with layers of historicism she is reclaiming the meaning, associating it with powerful women, which feels especially pertinent.

Where Findikoglu should err on the side of caution is her over-reliance on regalia and centuries-old grandiosity, despite her aesthetic’s singularity in the context of contemporary fashion and the gravitas of the subtext.

“Our power recognises the right of woman to life, liberty and the pursuit of happiness, provided that the exercise of this does not destroy or impair the happiness of any sister,” the manifesto concludes.

Revolution is perceived as idealistic in its nascency. But this revolution—signalled by #MeToo and Time’s Up—is well underway. This wasn’t idealistic, it  was condemnatory of the patriarchy and celebratory of the women shaping the future. It felt right for the times. She proposed, in essence, that conflict isn’t reserved for men in suits of armour, but the corseted women of Dilaratopia too.