In Paris, Couturiers Propel Themselves Into the Future 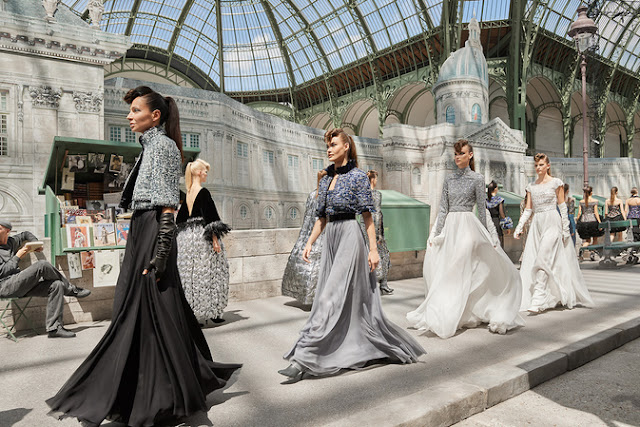 The backdrop to Karl Lagerfeld's Chanel haute couture show was the Quai de Conti. It's where les bouqinistes flog antiquary books and the Académie Française is located. It was quintessentially Parisian. But there was more.

Lagerfeld isn’t blind to cultural relevance, despite naysayers' complaints. There was symbolism: Simone Veil, Holocaust survivor, and prominent women’s rights activist entered the Académie Française as the sixth woman ever to do so in 2008. She was dressed in Chanel. Two days before the Chanel show, she was honoured by President Macron with a reburial at the Panthéon. Veil’s campaigns for women’s rights included advocating for improved conditions for incarcerated women in French prisons, introducing contraception methods for women, and, most famously, her successful battle to legalise abortion in France. Lagerfeld subtly spun a narrative about women’s lives and what Chanel has to offer them.

The feminist gesture Chanel offered was catering to the duality of women’s lives, coalescing business and pleasure. How so? Zips. Sleeves could be zipped up to reveal flesh, or zipped down to provide modesty. It was as playful as it was perfunctory, adding an unexpected lightness to proceedings. As Karl Lagerfeld told Vogue’s Hamish Bowles, “You can wear it zipped down when you visit your banker and zipped up when you see your lover after!”

The clothes were Chanel by the book, which meant a cast of bouclé suits and chiffon shifts that one has witnessed more times than probably any other suit ever. In that respect, it a bit antiquated. And the Star Trek-inspired hairstyles were unnecessary.

His bride this season was Adut Akech—the Sudanese-Australia breakout model of the year and the first black bride in a Chanel show since Alek Wek in 2004. Her seafoam green concoction was subtly subversive, zips-and-all. I learned it was a homage to the outfit Lagerfeld designed for Veil when she entered the Académie. The gravitas of Lagerfeld deploying Akech as the bride is not lost either. In a couture market dominated by Middle Eastern and Chinese clients, it’s a progressive statement to spotlight diversity. It’s a step towards the future of fashion.

John Galliano’s Maison Margiela collections are devilishly innovative and mildly humorous, a trait he’s possessed since the beginning of his fashion career.

His ongoing search for “new glamour” continued with his Artisanal collection, called ‘Nomadic Glamour.’ “New glamour” is an idea, he stresses, not a destination at which he hopes to arrive. It’s a concept based on evoking emotions through cuts of clothing, dressing in haste which results in paradoxical styling, and it questions appropriateness. What is appropriate? What is inappropriate?

In the context of this couture collection, it was a further example that couture is not bound by the past but it can still respect past techniques. For example, he endeavours to remove the seam from garments to create a more fluid garment. But he also reconstitutes throwaway cuts of fabric that are discarded by luxury houses. Recycling fabrics in haute couture might sound terribly surprising given the expendable budget of its clientele but for Galliano it’s fair game.

“New” is the operative word. At Maison Margiela Artisanal shows, a cape can become a man’s tailcoat, stockings can become the final layer of an outfit, and a skirt can be worn on your head. “It’s magic,” he quips. It’s an ode to the renegades who don’t live in the confines of society, ones whose ensembles are punctuated by historical references and emotional ties.

Moreover, exposing the couture process is something Galliano favours. “Honesty” is a word that comes up in the Margiela podcast he taped. Garments in the collection revealed structures, padding, interlinings, usually concealed by couturiers.

He spoke about neo-digital natives, the hyper-communicative iPhone-attachés. Some models sported iPhones supported by a ‘selfie pole’ from their boots. This was his ‘#real statement’.

His work, “the beginning of a symphony, maybe” as he describes it, is energetic, hopeful, and wonderful. 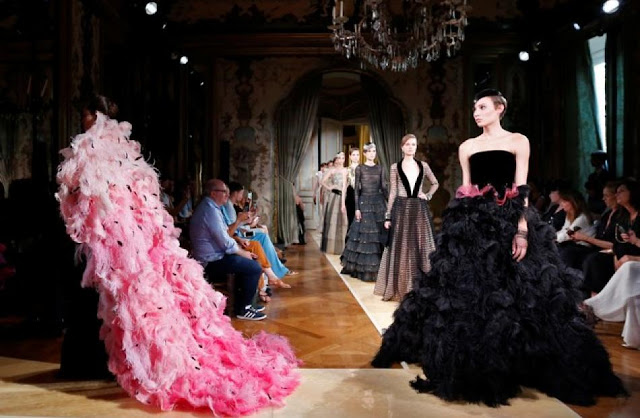 Giorgio Armani Privé too presented what can only be described as une surprise. The Italian couturier shed the frump which dogs his work and combined soigné lightness, and unabashed flamboyant frivolity.

In shades of charcoal, champagne, and cream, with a serving of turquoise and fuchsia, his models prowled the catwalk in an insouciant procession. There was something effortlessly self-assured and poised about their relaxed strut. They paraded in an array of updated 1940s-inspired gowns which bore unmistakably Armani silhouettes--an instantly recognisable sculptural modernity. But the effect it had this season was akin to a breath of crisp air. A designer primarily focused on propagating the same old, same old, this had a decidedly glamorous and contemporary edge.

There was more overt extravagance abound. A handful of models were decorated in flamingo-like finery: plumed shawls in shades of magenta. Elsewhere in the 92-look show, there were clouds of tulle floating on the models’ heads. For someone who has built on a career on understated sophistication, it was a lively addition.


Haute couture, as rarefied as it is, requires moments like this which push it into the future.

Posted by Paulidoodles at 12:20 PM