In Paris, Pick-and-Mix Individualism is in Control 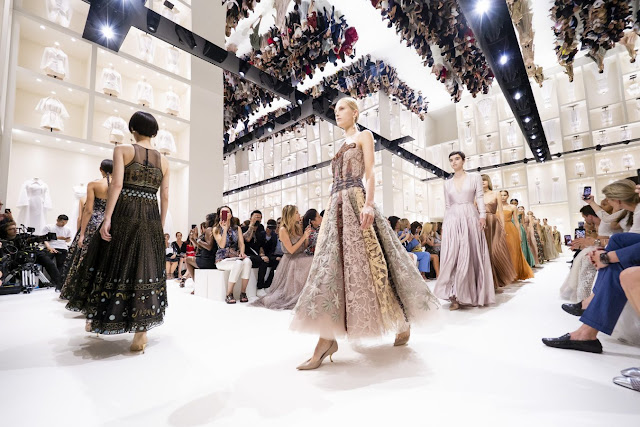 Maria Grazia Chiuri exercised a modest restraint for her latest haute couture collection at the historic Christian Dior. After two years, she stripped away the commodified feminism and focused on craftsmanship. There were decent dresses on display. She was thinking about the quietness of couture, the confidence in knowing that thousands of euros equates to exemplary service.

She wasn’t looking to provoke with this one. Or excite, seemingly. This much is surprising given the news that the V&A Museum announced it will host the largest and most comprehensive retrospective of Christian Dior. Christian Dior: Designer of Dreams debuts in February 2019 and it will be based on Christian Dior: Couturier du Rêve, the expansive recollection of the brand’s history Musée des Arts Décoratifs in Paris. The exhibition will encompass Chiuri’s work too, alongside the work of Dior creative directors past.

Although her clothes weren’t charged with drama or theatre, they were subtly elegant, quietly sophisticated, and inherently beautiful. One couldn’t fault the simplicity if it meant Chiuri was finally paying attention to the fact she’s designing at a couture house and not Forever 21. The women with the means to buy Dior will surely be swept away by a matte-duchesse satin pistachio gown with a pleated skirt.

Bertrand Guyon continued to grapple with the Schiaparelli archive, unearthing surrealism gems and doctoring a modern vision for the house. Shocking Pink is the obvious reference, the kind that leaves you bleary-eyed after awhile. He toyed with the proportion of a sweeping cape, another Schiaparelli signifier. A flamingo fascinator by Stephen Jones captivated in its extravagance but also its wry humour, which is something you’d expect from Schiaparelli.

But you would also expect a greater deal of direction. Where will he take it? What’s his plan? How will he keep the spirit of Schiap alive if he can’t sustain energy throughout the course of a single collection? He’s good but he needs to be better. 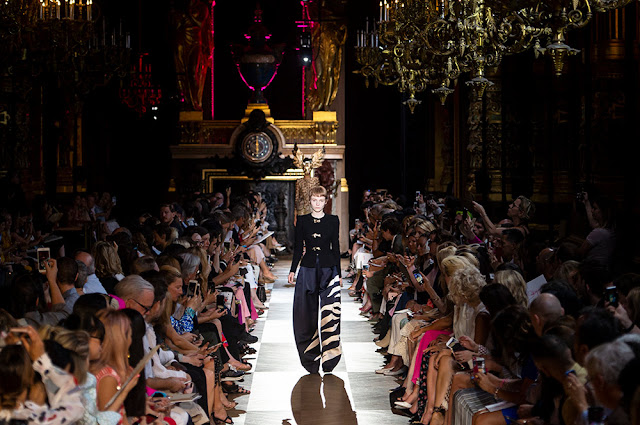 Peter Dundas didn’t present couture, rather Resort 2019, but his constellation of sequin embroidery, lace (in cycling shorts), big 80s-inspired shoulders warranted a place on the calendar. It would tantalise the taste buds of the Biarritz bombshells, their hedonistic lifestyles and penchant for revelling until the early hours of the morning. His fans include Beyoncé and Kim Kardashian, megawatt celebrities who opt for flamboyant, unabashed glamour with a hint of kitsch and a dollop of hubris.

It’s a type of glamour commonly associated with the 2000s, before the worst economic crash since the Great Depression beckoned and stealth wealth superseded decadent luxury. In the face of economic uncertainty, a minimal approach to dressing emerges. But Dundas was one of the few proponents of maximalism.


The variegated lens of contemporary couture collections revolves around one principle: the subjectivity of taste. In three days, there have been cases made for women of many fashion orientations. It’s something that stretches beyond couture and pervades the entire industry. Trends are gone. The colour of the season is no longer. The it-bag and the it-girl have vacated the premises. What we’re left with is an individualistic reign of fashion designers. But as individuals, they need to be more wilful with their expressions. It’s getting pretty dry out there.

Posted by Paulidoodles at 2:00 PM