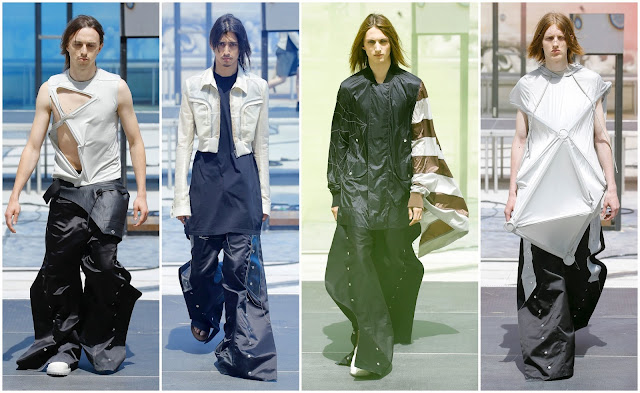 On Thursday afternoon, one of the remaining independent fashion businesses of a high calibre presented. Rick Owens, the Californian designer with a perverse, poetic and powerful attitude to fashion design debuted his Spring 2019 show at the Palais de Tokyo, where he tends to show his menswear each season. With independence comes the freedom to express himself in whatever way he chooses. He declared to The New York Times in 2017 that he has difficulty relinquishing control over his work.

Sulphurous smoke clouds in blue, yellow, green, and red erupted from the centre of the runway, billowing in the afternoon breeze.

He was investigating themes of chaos and control, as he has done for many years now. His musings on the state of the world are generally about finding hope amongst the darkness but, ultimately, to strike this ground he must first establish the equilibrium, playing with balance and counterbalance. It’s poetic, often esoteric, but it’s visually arresting. It’s perversely optimistic.

He was primarily thinking about Russian Constructivism and Vladimir Tatlin’s work which initiated that movement. He considered the hopeful symbolism associated with Tatlin’s never-realised architectural plans that were to celebrate Bolshevik success. There was an architectural intent with his clothing, his tailoring was as sharp as ever and he juxtaposed this with the undulating layers of fabric that attired the models’ frames.

With the ongoing immigration crisis in America, optimism and hope are dangerous. It’s something I also thought about seeing Craig Green’s show at Pitti Uomo in Florence. Fashion can seem frivolous in turbulent times. Why should we care about $2,000 jackets and expensive productions when there are children being separated from their families, placed in cages, and subjugated to depraved acts of inhumanity? But fashion is capable of holding a message. Think of First Lady Melania Trump’s Zara jacket controversy from during the week—was it a symbol of the administration’s disinterest in the plight of the immigrants or an attack on fake news journalism? But Rick Owens is skilled in the art of conceptualising emotions and producing profound designs, perhaps they don’t always look commercially viable but creatively brilliant. His belief in the world is endearing and enduring. The clothes were almost romantic in the way silks were draped across the body and the lightness of the tailoring.


At the end there was a coterie of Constructivist characters wearing tents (they were actually nylon parkas). Yes, they will be available in Rick Owens stores in 2019. Yes, they will come with support poles. If that’s not a bold expression of an unending desire to disrupt and to operate on one’s own terms then I’m lost for words as to what is.
Posted by Paulidoodles at 5:00 PM