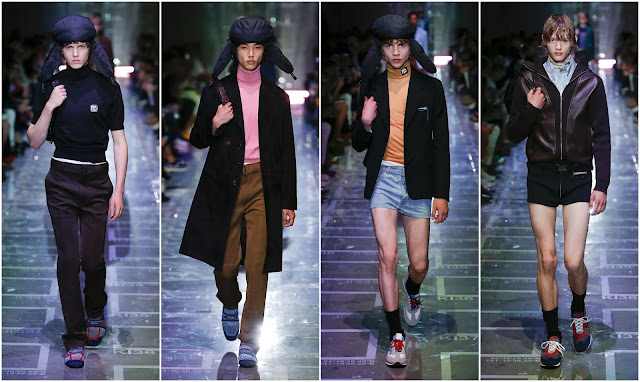 The common theme underpinning the majority of menswear today is designers exploring masculinity in all its machinations. What does it mean to be a man today? What does modern masculinity look like? It certainly doesn’t look what it looked like five, ten or twenty years ago.

Miuccia Prada is Milan Fashion Week’s sartorial kingpin. She displayed a bullish objection to hyper-masculinity at yesterday’s show at the Spring 2019 instalment at the Fondazione Prada in Milan. Her models wore short shorts, which the designer compared to mini-skirts. They were the skimpy kind usually found in family photos of beach holidays from the 1960s and 1970s. There were nylon options, denim too, and variations in signature-Prada vertical stripes. It reminded one of a darker version of Richard Linklater’s film Everybody Wants Some!!—thanks to the set design by Rem Koolhaas’ AMO studio.

Camp squared off with hyper-masculinity. Shorts battled against the formality of the top half of each look—standard fare from Mrs. Prada: tailored jackets, striped sweaters and simple shirting. There were a few frills, both literal and figurative, see the floral printed t-shirts. 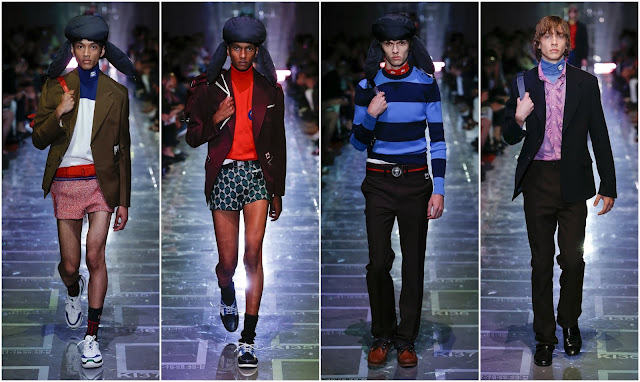 In recent years, Mrs. Prada has developed a narrative usually beginning with the men’s collections and further examined in the subsequent women’s show. But the opening look at yesterday’s menswear outing distinctly reminiscent of the women’s Resort 2019 collection from May. It was indicative of the cultural shift that’s taking place, where women and men’s wardrobes aren’t dissimilar.

The men at this show toted handbags. One supposes this was a dual-purpose effort. It looked like both an attempt to break down gender barriers but also offering a sellable accessory to their male clientele. (There were also Siberia-suited Russian ushanka-inspired hats borrowed from the women’s Resort 2019 show.)  Equally, it could be a proposition for the female customer who are known not to shy away from the men’s offering, especially in the current landscape where gender boundaries are no longer strictly observed.

A playful and neurotic take on masculinity, this collection also possessed an abundance of product. As with the recent collections, the plethora of product resulted in a creative deficit. It wasn’t as confrontational as the work seen at London Fashion Week Men’s or Pitti Uomo recently, nor was it as challenging or emotionally stimulating as Mrs. Prada’s own previous work. However, as Milan’s resident trendsetter and trailblazer, to redefine masculinity in its current guise for the general public and not just those attuned to fashion, perhaps baby steps is the way to go.