Into the “Hothouse of Winter Hedonism" at Peter Pilotto // Fall 2018

Attendees at Peter Pilotto’s London Fashion Week show weren’t just given fashion. They were treated to dinner, at Tramp, the private, members-only nightclub in St. James.

After a long day of shows, and harassment from aggressive anti-fur protestors (at mostly faux-fur-using shows), the press and buyers sat down to an entrée consisting of roasted winter squash, fennel, glazed red onion, sunflower and pumpkin seed; a pearl barley risotto, datterini, crumbed feta and basil cress for main course; and a chocolate marquise cuboid, with a fresh raspberry as dessert. They dined on ceramic plates with swirling designs and were perched on abstract nonagon stools, from Peter Pilotto and Christopher de Vos’ new housewares range.

The ambrosial feast was preceded by a collection, a paean to the “hothouse of winter hedonism.” It was fitting, then, to be in Tramp, which is considered the most exclusive private members club in the world. The oak-panelled milieu is frequented by thespians, royals, and according to MI5, the Russian spy Anna Chapman. Tramp’s nascency in the early 1970s was where they staged their exploration, imaging the decadent wardrobes of guests past. Silk gowns, skinny tailoring and floaty trousers, kaftans and wrap dresses were rendered in a panoply of colours; vermillion, indigo, violet, amaranth, midnight, amethyst—colours that looked as opulent as they sounded. Patterns were influenced by 19th century Austrian art movements—Beidermaier and the Vienna Secession. (One half of the design duo, Pilotto is half Austrian.) 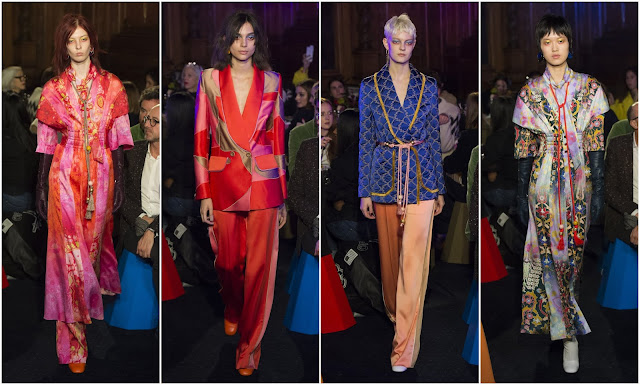 It was in line with Trumpian principles—themes of excess, decadence and loucheness were perpetuated across all four fashion weeks. The regression to the 1970s and 1980s symbolises a return to extravagant displays of wealth, hedonistic streaks, and a rich sense of self-importance. The past, as seen through rose-tinted glasses. Peter Pilotto’s homage to the disgustingly rich was full-bodied and colourful, surely to activate acquisitive urges when they enter stores in August. 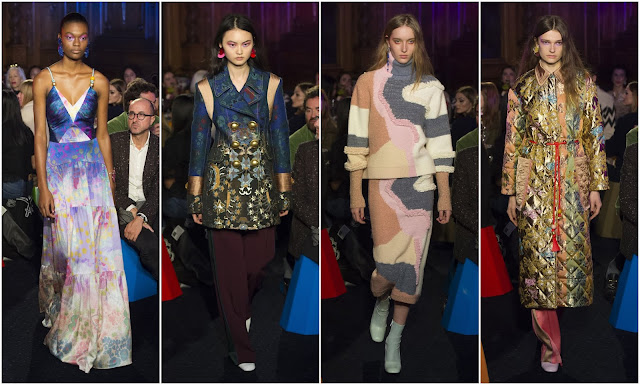