Finding a venue for London Fashion Week is quite the challenge. In February, Symonds Permain were welcomed by Lulu Kennedy’s Fashion East show, where they presented as special guests; Toogood’s presentation was held in their studio and store on Redchurch Street in Shoreditch, in an obvious attempt to cut costs. It was Mimi Wade who was befell by scheduling pitfalls, showing off-schedule, at the same time as Marta Jakubowski and Mulberry, in North London’s Hoxton neighbourhood. Scheduling misfortunes aside, Mimi’s show was the triumph of the afternoon. 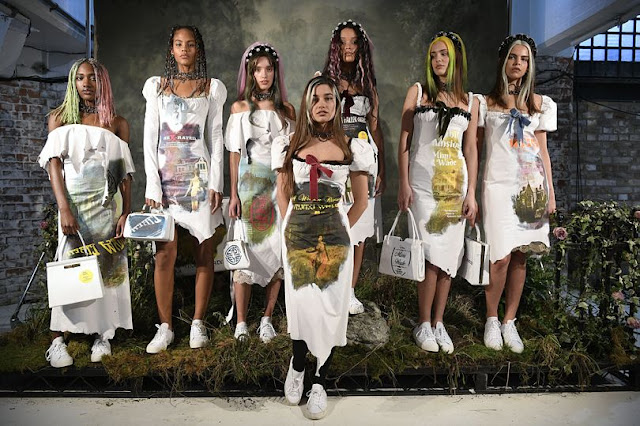 The starting point this season was HeX-Rated, pulp fiction about a private investigator in 1970s Los Angeles. He becomes embroiled in a case of a scarred pornographic actress to uncover the secrets of the set in the San Fernando Valley. In its blurb, it describes the the city thus: “Los Angeles has always been a den of danger and bliss, but even darker tidings brew in the City of Angels. Cults, magic, and the supernatural are leaking into the worlds of glamour and dives of the gutter.”

It’s timely to consider these enclaves as less than salubrious, in the wake of the Weinstein controversy with reshaped Hollywood as we know it. The foundations of the film industry were rocked when sexual misconduct, sexual abuse, and rape allegations were uncovered. Currently, Weinstein is on trial for rape charges in New York. 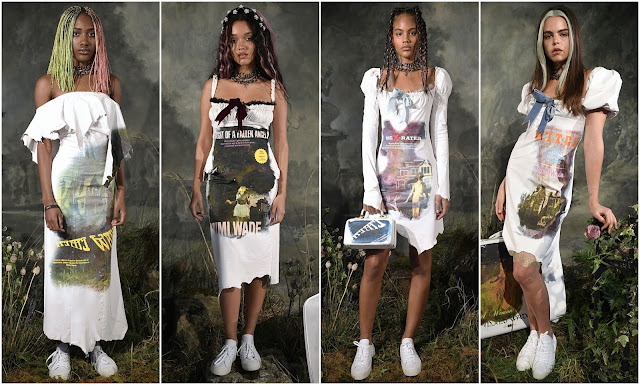 Wade’s designs have always been about the film industry. Pamela Curran, her grandmother, was a B-movie actress. (B-movies are low-budget commercial films.) Filmic influences pervade each collection. Dresses are printed with real or imaginary film posters; accessories are emblazoned with titles; variations of the Mimi Wade logo are stamped on them, like a film studio’s. Fall 2018’s slated titles were Witch (with the tagline ‘We Intend to Create Havoc’—undoubtedly a symbol for the uprising that ensued in the aftermath of the sexual misconduct allegations in Hollywood), Flight of the Fallen Angel, a nod to Fallen Angel, the 1945 film noir about a drifter who becomes involved with a waitress who is eventually found dead.

Her affinity for looking to decades dating as far back as the 1940s were echoed in the clothes which always bare a resemblance to cocktail dressing from a bygone era. She throttled the perfection of past seasons with this outing: Hemlines were frayed, revealing a lace underskirt; off-the-shoulder dresses had jagged edges; the dresses were styled with trainers rather than heels. This, of course, added an urban, contemporary air to proceedings, but it also pointed to a woman unbothered by perfection, and perhaps one shaken by experience. There was a moving vulnerability, something hitherto unseen in Wade’s work.


They were even more powerful in the context of that morning’s news. On February 16 2018, The Boston Globe article published that day unearthed claims against Patrick Demarchelier and Karl Templer. This was a mere few weeks after The New York Times printed a story about allegations against photographers Mario Testino and Bruce Weber. The fashion landscape is witnessing seismic shifts and Mimi’s collection, in its unabashed adoration for sassy, punchy, thrillingly girlish femininity, felt utterly relevant for the times we are in.
Posted by Paulidoodles at 6:00 AM