Champagne-guzzling attendees at Emma Charles’ party were treated to dancing models and a marvellous view of London at the Ace Hotel in Shoreditch during London Fashion Week in February. The clothes were decent too. And it wasn’t just the bubbles going to their heads after a long, first day of shows.

The Westminster grad launched her eponymous womenswear line in 2016 but she counts Preen by Thornton Bregazzi as her breakthrough role in the creative sphere. There were also stints at Tom Ford and Stella McCartney, in various capacities. The influence of Preen wasn’t by any stretch of the imagination suffocating, nor did they prevent Charles’ signature from shining—masculine-inspired womenswear, riffing on vintage garments. Cocktail dresses and tuxedo jackets contrasted nicely with the informality of sheer blouses and the patterned seashell embroidery. 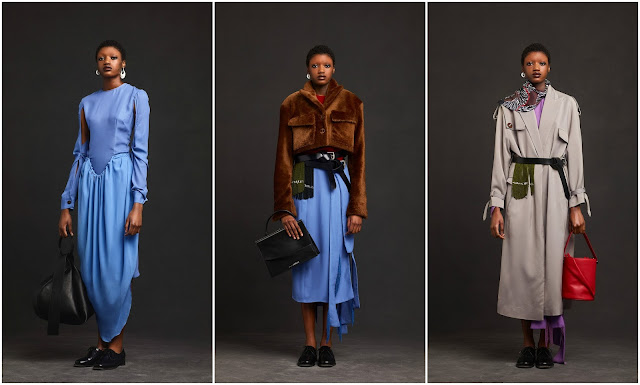 Throughout the show there were looks which resembled something from a wardrobe of yore but was somehow effortlessly modern. She diverted course from anachronism quite nicely.

The emphasis on accessories this season is Charles’ effort at solidifying her presence on London’s schedule as a viable long-term fixture. They’re what made Simone Rocha stand out from her peers many moons ago. Carving an identity in this field will probably come naturally to Charles, a member of the Instagram generation, who understands that Instagram mileage is a useful tool in commerce.

Her reflection of femininity and modern day dressing, if not too on the formal side, was relatively accurate. Will she switch the format up next season though, reworking the context once again to prove herself? A party and an intimate hearth-side presentation under her belt, the malleability of the presentation formats nowadays will permit Charles to explore what best fits her going forward. But there’s definitely a party girl in the making. London’s cocktail dressing fatigue behind us, the 21st century party girl renaissance is here.
Posted by Paulidoodles at 6:00 AM