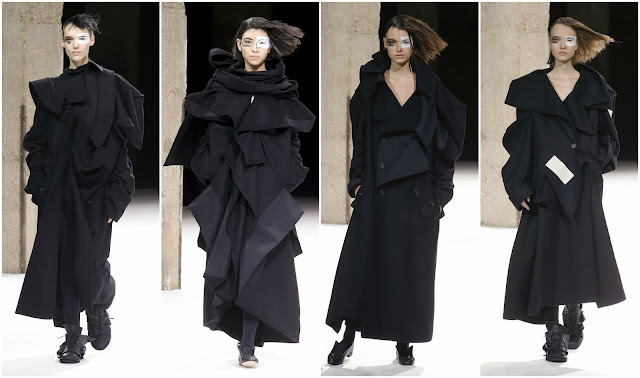 Yohji Yamamoto paid homage to the late, great, beloved Azzedine Alaïa and the Cubist movement at his Paris Fashion Week show on Friday night. It was an elegiac affair and when the string instruments began it was apparent the audience were in for a visceral response to passing.

The two were friends and it’s easy to draw comparisons between them. Although Mr. Yamamoto came up in the same class as his fellow avant-garde anti-fashion Japanese designers in the 1980s, he and Mr. Alaïa were both trend averse, they both viewed women in a different light to the great couturiers and burgeoning ready-to-wear practitioners at the time. Their legacies are enduring: Mr. Alaïa’s proved by the ‘Je Suis Couturier’ exhibition at the Alaïa HQ in the Marais, or the upcoming one at the London Design Museum; Mr. Yamamoto’s is cemented by the length of his service at Paris Fashion Week, the eager crowd he still draws, notwithstanding the new blood here, there and everywhere.

There is also a connection between them and Cubism: abandoning linear perspective, fragmenting forms into different planes, combined different views of the same subject. In this case the subject is womanhood, but Mr. Yamamoto took that one step into literal territory with his trench coats. He conceptualised the classic wardrobe piece, recalibrating it and crafting something that was truly authentic. He did what many have struggled to do this season, take something from the past and contribute something new to its dialogue. The coats were twice layered, necklines were extended, folds were added to create further illusions, their centre was knocked off to the side in some cases. Jackets became shirts, transmutative fabrics belying the eyes. His sculptural prowess demonstrating the powerful poetry of fashion.

Black is the colour of choice—forever and always. It imbued proceedings with a funereal sombreness. It is also an all-encompassing colour, with symbolic connotations including functionality, elegance, darkness, mourning, power and authority. All of that is represented on Mr. Yamamoto’s runway—the language of the colour black is not limited under his sleight of hand.

You can’t really imagine a Mr. Yamamoto-crafted body-con dress, can you? There were no overt references to Mr. Alaïa other than corsetry. Which punctuated the latter half of the show. They were asymmetric and fashioned from fragmented leather. It reminded me of a work by contemporary Irish poet Eiléan Ní Chuilleanáin, ‘Deaths and Engines’. “You will be scattered like wreckage, the pieces every one a different shape will spin and lodge in the hearts of all who love you.” 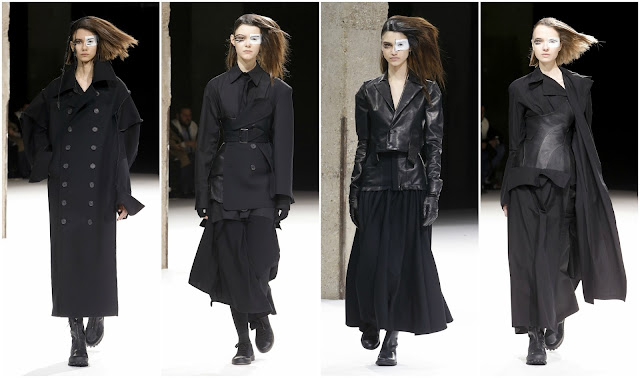