“Authenticity is an original thought, a concept or idea. For a fashion designer it would be someone who invented something that other people go on to copy,” says Miuccia Prada in the latest Vestoj, an annual sartorial journal.

John Galliano is one of the few designers operating today with an ardour for newness. His three-year-long stint at Maison Margiela has thus far been about reflecting the past concepts of the house’s founder while contributing to it, to carry it forward to the future. His unmistakable point of view distinguishes his from many working today, it can be said.

Décortique, the principle that has marked his work of late continued. It is the French for “dissected”. A leather jacket was hulled, forming the exterior to beige trench coats and. This season he looked at sheer fabrics as a means of capturing iridescent ones, trapping them effectively. He pondered dressing in reverse, putting what’s outside inside and what’s inside outside—perhaps those masculine tropes were informed by his debut in the house’s menswear division, surveying gender lines; or those lingerie-inspired numbers. Metamorphosis more than anything is the tentpole in his work—he encourages one to marvel at the possibility of modern fashion, leading the consumer rather than following her. A parka transformed into a lingerie-inspired slip dress, a check jacket evolves into a gable-knit turtleneck, a blazer becomes an apron.

If “future wear” is the direction Marine Serre reckons fashion should be heading in, it is strikingly apparent that Mr. Galliano is its trailblazer, the beacon on the road ahead, guiding wunderkinds like Ms. Serre. Since assuming the reins he has cultivated a new image for the brand, one which hews closely to the house’s primary code: deconstruction. However, that is not to say he doesn’t interpenetrate his work with his own signatures—those tongue-in-cheek references to old-school glamour and theatrical fashion. 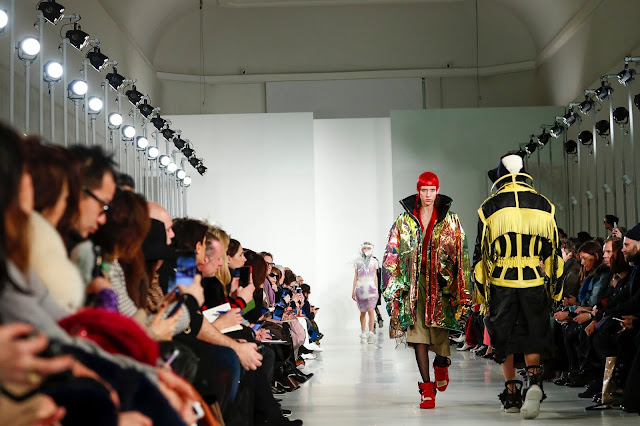 Olivier Lapidus is having a difficult time grappling with the prospect of newness at Lanvin, in his sophomore season at the house. After facing a tremendous blow to his confidence following the universal distaste from the fashion press last season, he attempted to make amends this season. He wanted to bring back some of the attributes of Alber Elbaz’s Lanvin tenure, the much-lauded and commercially successful period in the brand’s contemporary history. There were rich tones aplenty—emerald, sapphire, ruby, gold—but none of it had the defining warmth which characterised Mr. Elbaz’s oeuvre. The gold was weak, diluted even.

He tried to make ballooned sleeves happen but it looked silly, lacking the slick finesse of those unforgettable lantern sleeves Roksanda did in London a few years back. The only success amidst all of this was Tami Williams, tall and lithe, in a white turtleneck-cum-headscarf, charcoal trousers and a floor-sweeping black dress jacket.

The lowest point was a red turtleneck with a salmon chiffon skirt, styled with a metallic belt (?), sunglasses (??) and snakeskin boots (???). His message was unclear. 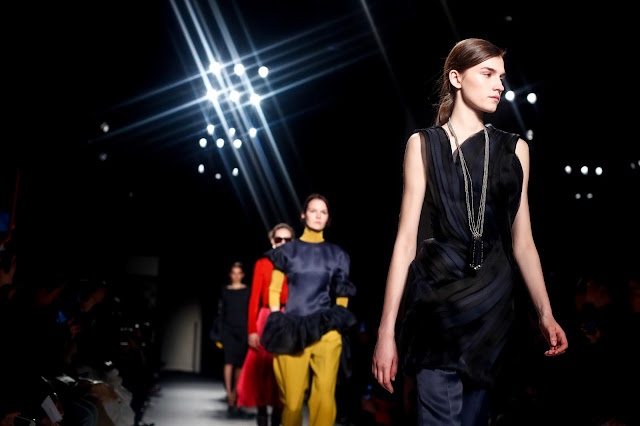 The Belgian Dries van Noten took over the Hôtel de Ville—coincidentally, where Lanvin’s previous artistic director presented her debut a few seasons ago—and it was more or less what you’d expect from him. Mr. van Noten has mastered the art of invention and reinvention. His customer knows roughly what to expect, reliably polished garments with an inherent longevity, replete with an intense focus on fabrication and colouration.

Combating the lukewarm reception his menswear received in January, his womenswear display yesterday afternoon was comparatively more creative; it began with the discovery of his early sketchbooks, complete with graphics drawn in biro. (The invite was also in blue biro ink.) This led him to outsider art which possibly aligns himself with the fantastical dream of the fashion industry, which would’ve been within reach when he was studying at the Royal Academy of Fine Arts in Antwerp. He counterbalanced this with the splendour of 1930s Art Deco and the modernist leanings of French couturier Paul Poiret. (Poiret is expected to see a revival this Sunday when CEO Anne Chapelle and artistic director Yiqing Yin unveil the renewal of the house.) He filtered in 70s glam rock for good measure.

There were many references to assimilate in the show, which spanned 73 looks. Those looks printed with Art Brut motifs were the strongest. In particular, his approach to decoration was beautiful. A check skirt was enlivened with the addition of glittering tinsel appliqué. An embossed coat was bracketed by a woolly scarf. The lighter fabrics however looked surprisingly cheap. It was in part down to his questionable acknowledgement of sportswear. Is Dries where a woman in search of a tracksuit jacket will head? Will Vetements cater to her tracksuit pants need?

There were also familiar outings at Lemaire and Rochas. Christophe Lemaire navigated the post-Céline landscape with aplomb. The Frenchman’s customer is not too dissimilar from Ms. Philo’s former fanbase. His Fall show was a highly-stylised foray into drapery and folds. His minimalist tendencies haven’t subsided and it’s clear he’ll be the one leading the Céline woman from here on out. Meanwhile Alessandro Dell’Acqua at Rochas charted the fringes of gothic fashion with his elegant daywear. The romance was at odds with the poor lighting and stiff fabrics. Perhaps a gentle reminder that capturing the quotidian is a solid move in fashion, but you also have to capture imaginations. More originality. It’s what we saw at a charmingly artful Aalto presentation, by Finnish designer Tuomas Merikoski, and Christelle Kocher’s Koché on Monday—both spinning a youthful verve on subjects ranging from the apocalypse to asymmetry. 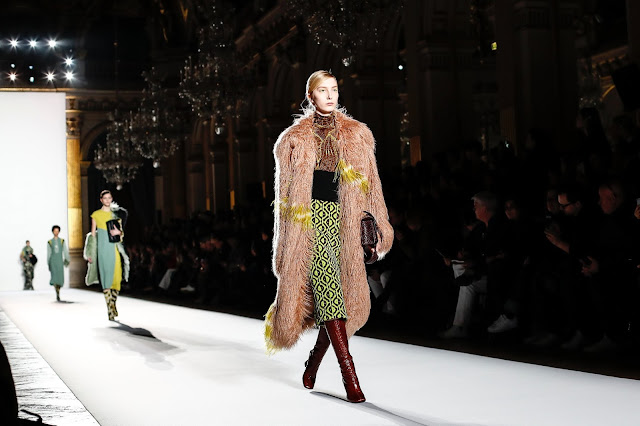