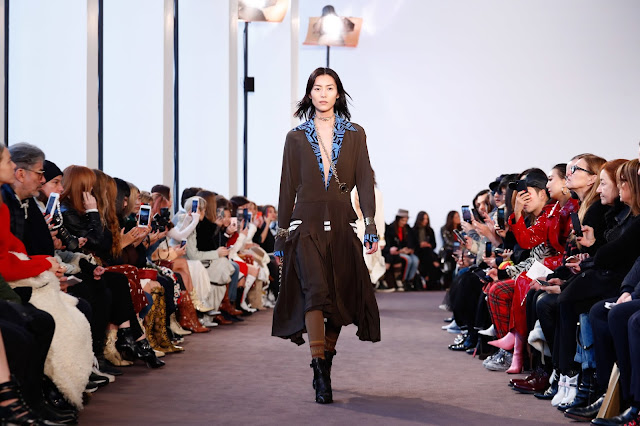 Right before Natacha Ramsay-Levi was about to reveal her revised plans for Chloé, at the Musée de Radio France, Burberry announced Riccardo Tisci had been appointed as chief creative officer of the brand with his debut to be expected in September during London Fashion Week. The social media sphere was abuzz with those asking how his Burberry will look, why was he chosen as Christopher Bailey’s successor and what will his arrival mean for London Fashion Week.

The news fell to the wayside as Fran Summers prowled the catwalk in a plunging neckline dress with a dropped waist, in ochre and merlot. She was dead set on pushing 1970s French chic, the brand’s heyday and hallmark, to the fore. She infuses deconstructionist methodology to transport the clothes to 2018, a cerebral touch that undoubtedly references the man she earned her stripes from, the man who was perched front row: Nicolas Ghesquière, artistic director of Louis Vuitton womenswear. Elements of the collection resembled the feminine sportswear of his.

Honouring the codes of Chloé is to be expected but what defines a new era is the character and personality of the designer, reworking the language to suit their vision. There was an unconventional beauty embedded in the threads; her futurist equestrianism was a delight—there were roomy, deconstructed trousers, updated graphics from the first collection in an autumnal array of colours. Medieval influences were peppered throughout: the way sleeves inflated with armband accents, the elaborate surface decoration and golden accessories. There was also delicious daywear with silk shirts and cycling shorts under a delineated chocolate brown jacket and romantic evening wear with slits positioned hither and thither, necklines destined for a southward journey. It all maintained an emphatic sexuality in a time when it is unclear how to express that. 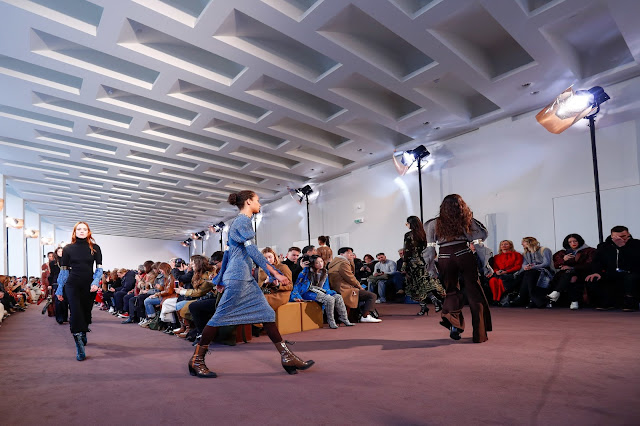 The compelling simplicity of Antonin Tron’s label Atlein is indebted to his training under Mr. Ghesquière also. Survivalist chic and sportswear, protection and surfing: Mr. Tron made unlikely bedfellows out of the two seemingly disconnected concepts and compounded them wonderfully, solidifying his status as one to watch on the Paris schedule. Mr. Ghesquière has a similar knack for combining disparate reference points such as sportswear and 18th century dress.

What began as technical wizardry mastering jersey, Mr. Tron expanded his narrative to sturdy, asymmetric outerwear which looked all the more appealing with the ‘Beast from the East’ battering Europe with its frosty grips. It had been snowing in Paris overnight. Of course, there was some of his signature in the show, seen on stretchy skintight dresses. Towards the end he introduced plaid with the colourful graphic providing another avenue for his future collections to explore. His point of view is distinct but maybe he should up the ante, no? 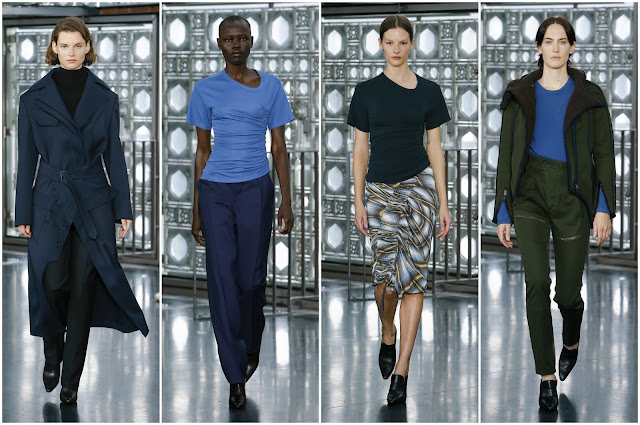 Julien Dossena, another of Ghesquière’s disciples on the calendar, designs for Paco Rabanne. Although there is a total disconnect between the image of the house the public connects with—the gaudy, garish Lady Million perfume advertisements—and the high fashion context in which Mr. Dossena operates, this fall collection is something you’d hope the house capitalises off and exposes the public to. He struck a breakthrough. Finally. After years of presenting steely sportswear that failed to do much, he finally achieved what he set out today: break new ground with chainmail.

He imbued it with lightness, a feminine delicacy that has been hitherto absent. Pailettes danced with the model’s stride, chainmail bounced with every footstep, the metallic textures flickering like a real life Kira Kira app video. There was warmth too, huzzah! He dressed chainmail up and down: chainmail with tuxedos, under striped t-shirts, camisoles and denim jackets. The best iterations were with a beige turtleneck and a grey hoodie. Not only did it exemplify his knitwear prowess—the greatest quality in his work, in my opinion—but he detracted from the lofty nature of his previous work.

Like Mr. Tron, he set out to expand on his design vocabulary. There was a bias-cut silk dress in a rose champagne colour emblazoned with daisies; a deconstructed shearling jacket stood out as a weather-appropriate alternative to the trench coat, which also appeared. There was a navy blazer, striped short and light-wash blue jeans combination that embodied a recognisable Frenchness. Perhaps he found victory in expanding—Paco Rabanne will also be about chainmail, but it doesn’t mean it has to be limited to that. 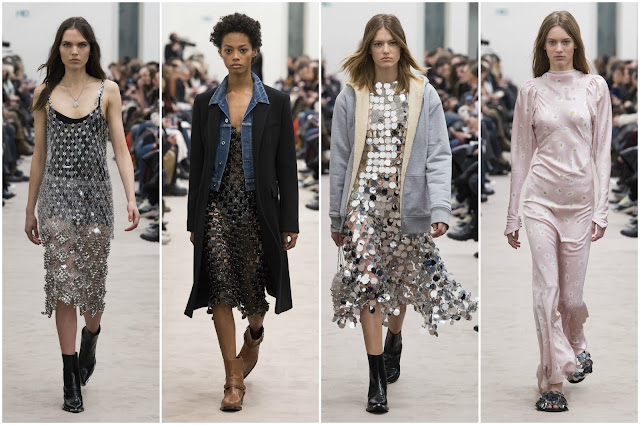