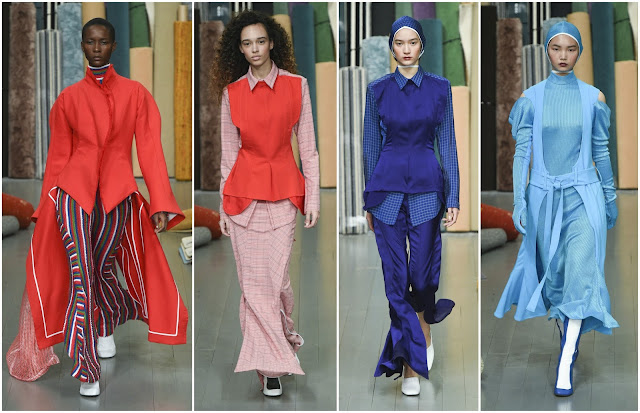 Having spoke to a number of editors afterwards, the general consensus following Richard Malone’s 9am show, officially opening London Fashion Week, was that it was his finest outing to date. (Due to a delayed flight from, I tragically missed the show by twenty minutes.)  The Wexford-born, London-based designer has been on the schedule since February 2015 when he debuted his conceptual approach to workwear off-schedule, at Old Street Station. This was before his official schedule beginnings at Fashion East where he dissected working class culture, hewing on his mother’s Argos uniform. For Fall 2018 he continues his exploration of these codes, this season condemning the narrow-minded ideology of ‘good taste, bad taste.’ Rather, Mr. Malone is fascinated by the in-between, examining the cross-section of the two ideals, which is inherent in Irish culture.

He’s never been one to seek Kardashian-patronage or social media clicks, his honesty in part could be from his background. In the past he’s considered the alcohol-fuelled caravan park summers listening to bombastic rap music or the flamboyance of his aunt at his Holy Communion, with a skinhead, tattoos and zebra print dress, his mother’s uniform. This season it was aprons and heavy-duty workwear jackets. They were reminiscent of a builder’s preferred outerwear selection, both in their heavyweight practicality and their cocoon shape. The aprons reflected a utilitarian principle that underpins his work. Despite the estranging price points, Mr. Malone is insistent that his work isn’t about the fetishisation or appropriation of working class codes. It’s very much a reality for him. Everything is machine-washable and equipped with pockets for busy lives—it is perfunctory but visually astounding. And his artful approach to it is far more interesting than the aestheticisation of it, as seen at Burberry, Gosha Rubchinskiy or Vetements, where it is problematic.

According to Sarah Mower’s Vogue report, Mr. Malone is an ardent supporter of sustainable fashion. He continues to work with the same set of Indian weavers he discovered at the time of his BA womenswear graduate collection at Central Saint Martins in 2014. They provide him with handcrafted tweeds in bold hues that enrich his work—this season everything was rendered in shades of plum, Bic biro blue, shamrock, sky and scarlet. Silhouettes were more fluid than in previous seasons, perhaps lending more commercial potential to his glamorously sculptural edge.


In a characteristic blink-and-you’ll-miss-it moment, the designer hopped on the runway for a quick wave to the photographers pit and the laudatory audience wearing a HunReal Issues t-shirt, supporting the Repeal the 8th campaign—spotlighting the necessity of liberalising abortion rights in his native country. This is a politically engaged young man and it pervades his work too, with an eye for sustainability and sociopolitical structures. Bravo, Richard! 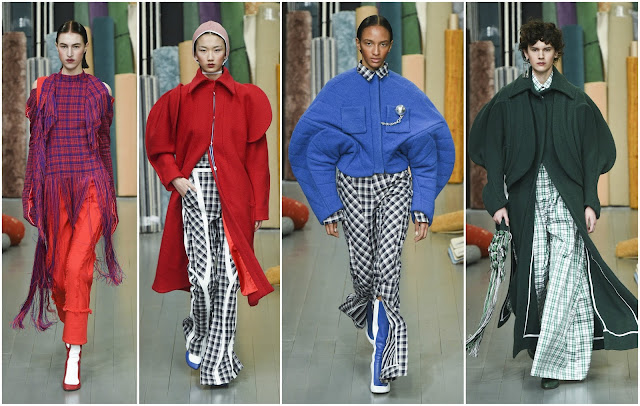