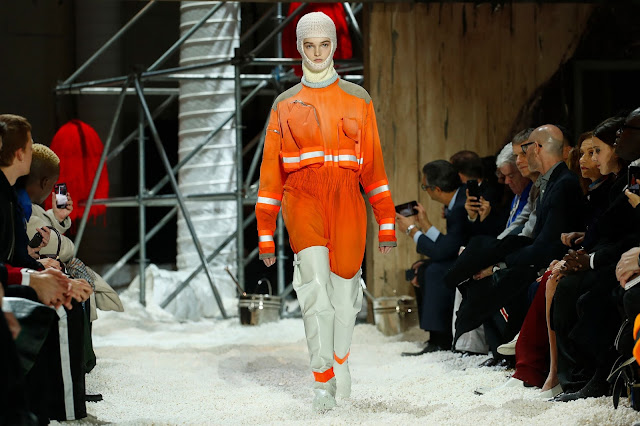 Three seasons in at Calvin Klein and Raf Simons has already crowned himself the King of New York. Along with his menswear show last week, his enduring legacy and savvy merchandising skills make him one of the best designers on-schedule, in a season when most have decamped to Paris and there are more to follow. His invitation was a bag of popcorn, emblazoned with a series of Andy Warhol prints and the words “More and More and More.” The set at the American Stock Exchange was filled with popcorn, the place smelled like salt, but it inconveniently clung to guests’ shoes.

Was he talking about people in the digital age and overexposing our lives on social media? Was he talking about mass-consumption and needless production of stuff? There’s always a sense of irony when designers tackle consumerism. Ultimately, a conglomerate like Calvin Klein is a offender in producing an excess of product. They are part of the problem. However, to offer a worthwhile stance on the subject a designer must create something worth keeping and a proposition for that is to critique the times, create a time capsule which can become as timeless as modern art.

Once again there were Andy Warhol references. The barn from the Spring 2018 was reconstructed alongside scaffolding and Sterling Ruby sculpture and printed on the wall was a mural of one of his prints, of former European editor of Vanity Fair, Sandra Brant. The Andy Warhol Foundation’s partnership with the Calvin Klein brand (which extends through 2020, according to WWD) is a testament to Mr. Simons’ desire to load his collections with references to Americana that are unmissable but maybe not the ones you’d expect. Last season it plumbed from the Deaths and Disaster series. It wasn’t Marilyn, the way Versace did it. Or Emperor Mao. The familiarity yet obscurity of his references are what continue to draw audiences. The lesser-known works also continue the Belgian designer’s interest in the beauty and horror of America and its relevance now.

There were contrasts between the urban and pastoral territories in the show. Hazmat suits you’d expect to see on city garbage truck workers became fashionable, diluting their industrial nature into something surprisingly wearable. It fed into the bucolic leanings with a prairie-inspired lien up. There were light gown which conveyed both his dressmaking prowess but also the idea of prairie madness, the solitary lifestyles women would have led. The Western-inspired portions were softened—the colours were lighter than in the past and it continued to tow the line between masculinity and femininity.


It was a cinematic experience, in its approach to product development too not just the elaborate mise-en-scènes, and the the final instalment in what he’s calling a trilogy. Navigating the slalom of repetitious design, Mr. Simons enthralled his audience and had them wanting More and More and More. 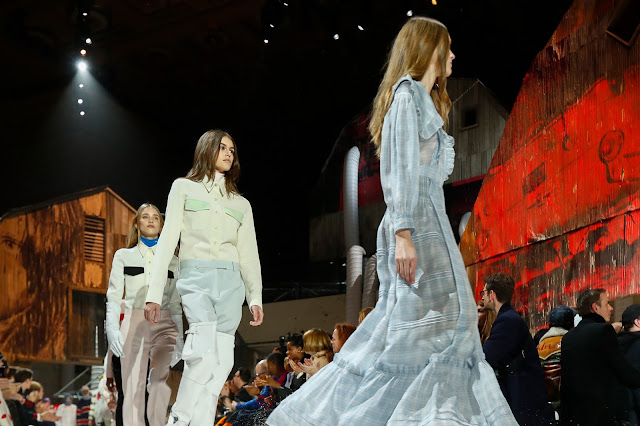 Stuart Vevers continues to mine Americana references for his Coach 1941 collections. There was something darkly wonderful about this as he wished to bestow upon his models a sepulchral look, and witchy undertones ran through the looks. It was informed by American gothic. Americana contains such a diverse pool of potential… ultimately, it is what you make of it. For Vevers, it’s about romanticising the tropes in order to make them feel relevant for the Coach 1941 customer—it was a brand which was previously known for its omnipresence at outlet malls but Vevers, with the endorsement of Selena Gomez, has managed to revive the it, skilfully translating it to the present day, even if his romance is strikingly outdated.


One saw a comment on The Fashion Spot forums which described him as “the Alessandro Michele of New York—he doesn't need to to pull any stunts to sell clothes.” It’s true: Vevers narration, his woodland scene is about forwarding the aesthetic, while partly creating a social media moment. However, it’s not the focus. His faux furs and leathers are. The way he subtly changes them season upon season, shifting them to fit the theme—the midwest prairie, the the glitz and grit of 1970s New York, skate and surf culture—is pleasant to watch. It may not be exciting, but neither is Gucci anymore; it’s a lifestyle, but at least there’s the backdrop in which its situated. However, the full-scale immersion of Raf’s Calvin is what people after. Something to write home about. 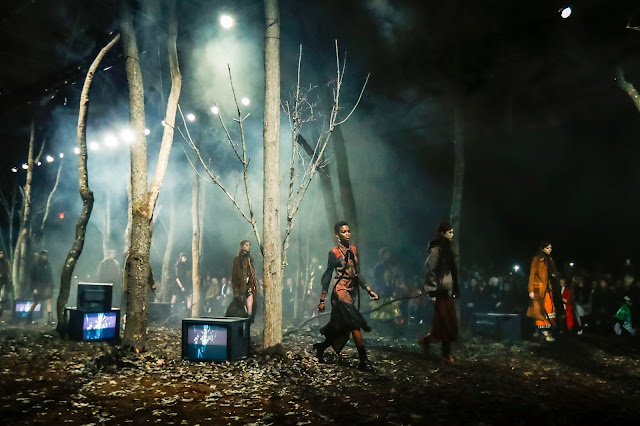