Mary-Kate and Ashley Olsen have never been ones for obscenely large presentations for their brand The Row, a repository for fuss-free, minimalist-based fashion for the professional woman who is ready to fork out thousands for luxurious basics. In fact, they’re quite a reticent duo. After exposure to the spotlight as child actors, they have successfully stepped away from it, allowing their fashion endeavours to assume importance. Their Fall 2018 show on Monday morning was about serenity and movement. Their clothing, polished and elegant as always, with a few monastic twists here and there, was juxtaposed with the biomorphist sculpture of Japanese artist Isamu Noguchi, whose work dotted the runway.

There’s something brilliantly casual about The Row’s presentations. Sometimes they take place in the brand’s New York store on the Upper East Side, they’ve done breakfast at The Carlyle, there was the season they sat on the floor and watched the show amongst guests. The level of intimacy perfectly matches their work—it’s beautiful, simply. It’s not trying too hard. It doesn’t chase social media impressions. It doesn’t want to engage with the fashion circus. Those who love it—and can afford it—love it and that’s that. Something like that has the ability to transcend the ephemerality of fashion and it’s why, without resorting to soberingly dull minimalist design, they are some of the best designers out there.

It contrasted with the cringe cartoon that was Ralph Lauren, a couple hours later. Transforming the set into a cruise ship, presumably destined for the French Riviera, the brand delivered a broad range of looks for the jet set who decamp the subzero temperatures of North America for the Mediterranean, bathed in the winter sun and comfortable climate. Most of it was familiar, trite. He put a spin on his signature double-denim look, favouring an acid wash look. His menswear was less rigid, a positive change from the formality of his Purple Label which presents in Milan during men’s fashion week. There was a nice flapper dress in an ice blue, modelled by Bella Hadid. The evening gowns weren’t up to scratch but Yasmin Wijnaldum bestowed upon the audience with a gorgeous pleated gown in a variety of colours. It was a simple-minded affair that could’ve used more streamlining. 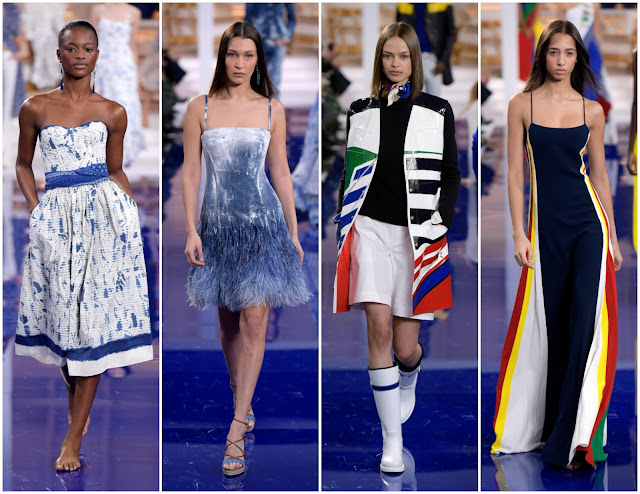 Derek Lam honours the codes of American fashion and perhaps occupies the same place Ralph Lauren did. His outing was marked by pure lines, familiar fabrics and a sporty spirit. It doesn’t get more classic than ink blue jeans with an striped navy turtleneck, a big handbag thrown over the shoulder and black boots, one of the first looks out

The ensuing collection featured trousers with side stripes that were on-trend, but not revolutionary—they’ve been done to death by high-street retailers as a jaunt to Zara will tell you. However, the exposed seams running down the front of the pant felt more innovative and aesthetically pleasing. Likewise, the square shoulders of his coats hewed close to Demna Gvasalia’s Balenciaga collections but his quilted jackets and skirts held much more interest. He didn’t strike gold with those ghastly yellow trousers which resembled MC Hammer in the 1990s, but he hit the mark sharply-tailored houndstooth suiting and pinstriped overcoats.

The latter half of the collection became decidedly muddled. T-shirts and skirts were featured horse insets and some of them had a sheer overlay; the silhouettes became more supple but serenity was supplanted by sloppiness. There was a weird Native American-inspired segment that lasted two looks and at the very end there was a slew of ill-fitting gowns. His message was uncharacteristically unclear. 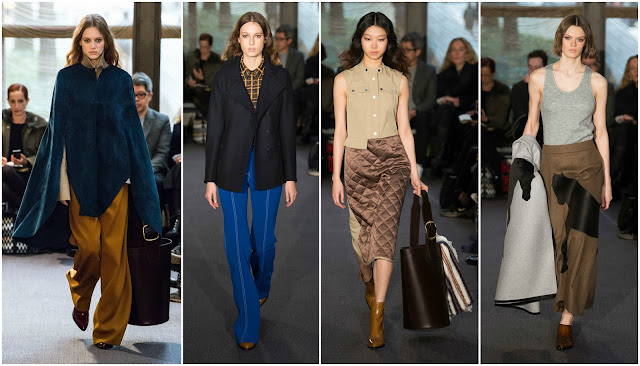 Laura Kim and Fernando Garcia finally found a way to express themselves through the house codes at Oscar de la Renta. How so? They adhered to them. After butchering Spring 2018, their Fall 2018 was far more accomplished, polished and relevant. Having spent countless years in the studio there it appeared the duo had finally made use of their time spent with the late Mr. de la Renta and made a fine attempt at modernising his oeuvre without tarnishing it or making it oppressively young and jettisoning the woman—a luncheon-bound upper class woman with charity fundraisers and boardroom meetings on her schedule.

Infusing their shirting prowess, from their own label Monse, with Oscar isn’t a worthwhile move. Trousers: yes, they’re functional and appropriate. Men’s shirting: no, it’s at odds with the brand’s core values. These things can’t be bluffed. There were parts when the trousers didn’t fit the description either. Sure, they add variety but they look seriously out of step with the identity of Oscar de la Renta. As for those cocktail dresses, with embossed floral patterns, shimmering sequins on swirling designs, or those embroidered wool sweaters and jackets, those were examples of a house’s codes interpreted and reworked contemporarily, with exceptional craftsmanship.

Towards the end there were ball gowns. The late Mr. de la Renta was a purveyor of those. The best one here was the most modern, it had a voluminous train, the fabrication was so light that it almost caught flight with the model’s every step. It had drama to be suited to the brand but enough lightness to be considered modern. 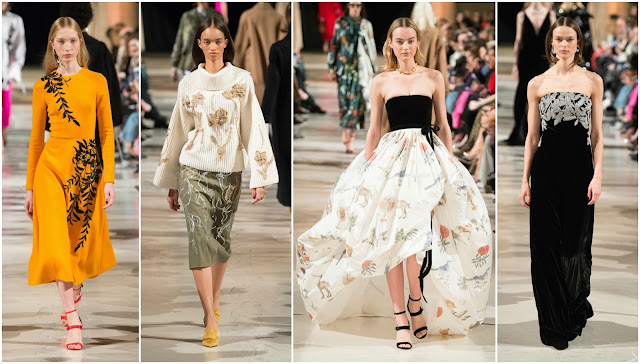