Haider Ackermann’s arrival at Berluti truly renewed the brand’s relevance in the twenty-first century. His predecessor—Alessandro Sartori is now at Ermenegildo Zegna—failed to generate the same traction among the press. However, Mr. Ackermann’s command for colouration and silhouette has thrilled and delighted for all its subtleties and its honest, unabashed minimalism, its aversion to using social media moments to win followers and its refusal to pander to millennials in the same way other brands have. It is conscious most young people can’t afford $2,000 leather jackets and the like.

His work, even at his eponymous label, isn’t so much about these worldly inspirations from the art world or music rather it is about how the personality of the wear embeds itself in the clothing, how clothing can be imparted with emotion which, of course, distinguishes it from being mere fodder. But it doesn’t require farfetched design to portray these ideas. 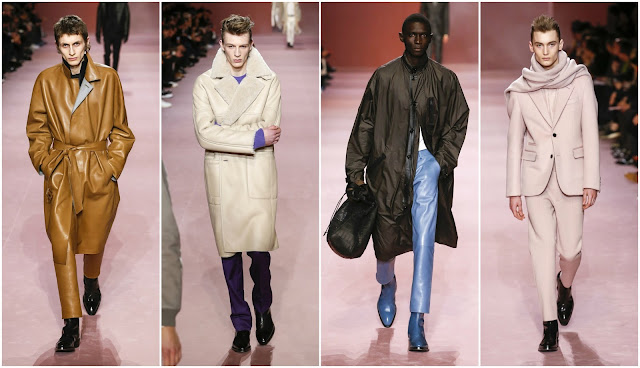 Serenity is what Mr. Ackermann is here to disseminate. His output for Fall 2018, like before, heavily insisted upon catering to the man who doesn’t need fuss in his life, he isn’t interested in the noise surrounding fashion but his wish is to present himself in a fashionable manner. The first look out was a butterscotch leather coat and matching trousers. Simplicity in shades that slightly differ from the norm is the meat and potatoes of his iteration of Berluti. There was a shade of blue which reminded one of a frosty morning, when chilliness is almost implied by the sky’s appearance, and a purple which was somewhere between a mauve and a violet. These block colours appear on weather-appropriate jackets, cashmere turtlenecks and tapered trousers. One can tell a story with colour. Rich emeralds and deep amethyst hues were deployed, once again, emanating a delectable richness. Dusty pinks were utterly sensuous—the foundation of Mr. Ackermann’s oeuvre.


Minimalism is never quite as evocative as it is in the hands of Mr. Ackermann who is unquestionably imbuing a level of emotion that has been removed from minimalist design in recent years. There are many designers—Margaret Howell namely amongst them—who are brilliant designers of quiet, respectable clothing. Few—Margaret Howell chiefly amongst them—have the ability to present different visions of the theme. For Fall, Mr. Ackermann is exploring romanticism, strength and independence. It is truly fascinating to watch unfold. Coupled with his powerful, potent prismatic poetry, Berluti is arguably one of the finest examples of modern menswear on the fashion calendar today.
Posted by Paulidoodles at 6:00 AM