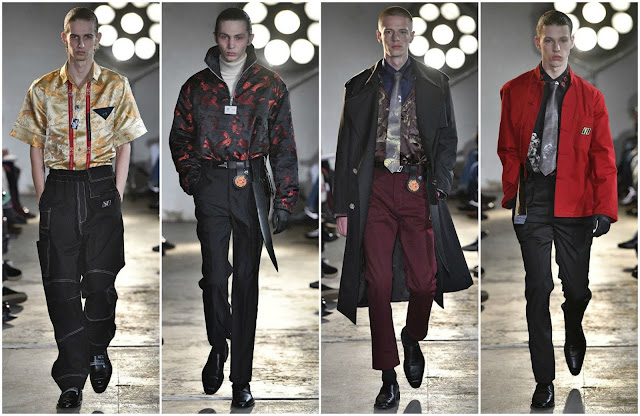 Xander Zhou is a Chinese-born, London-based designer. He was one of the first designers to present Fall 2018 at January’s instalment of London Fashion Week Men’s and one of the few offsite shows. One of the defining quotes on his website which accompany a minuscule biography is: “preserving traditional culture through fashion might be respectful towards tradition, but it is not respectful towards fashion.” As proven by the Metropolitan Museum of Art’s 2015 exhibition ‘China: Through the Looking Glass’, Western fashion likes to pick and choose disparate tenets to Chinese culture and melds them however it pleases as a means of preservation. As exhibition director Andrew Bolton astutely noted, it creates “a pastiche of Chinese aesthetic and cultural traditions.”

However, when designers like Mr Zhou this season—or Feng Chen Wang last season at New York Fashion Week Men’s—issue their personal stamp on Chinese culture it contributes to the dearth of authenticity in fashion, but it also acts as a means of progression. He is prepared to adapt Chinese tradition to the future. But he does also assert “fashion is much more about individual expression than about nationalism.

Permeating the ancient youxia warrior regalia, the tangzhuang jacket, the changshan dress, hybridised gongbi brushwork were unmissable cadences of sci-fi mysticism, which portray a dystopian vision of the world. They were also visible last season, in his American Psycho-inspired show which subverted mundanity and posed a response to surveillance, with models wearing wire taps. This warped humanity, the atmosphere of dystopia contributes to the idea that the world is currently devoid of positivity, or even progressiveness. Mr. Zhou may not have tackled the motions of the day—natural disasters unleashing destruction about citizens; the incontrovertible effect of climate change; the troubled rhetoric of political leaders—but like a writer, he captured a moment in time, one where cynicism is more prevalent than compassion.

Is it easier to be cynical? Is mustering a positive demeanour too much effort? Is propagating positivity worth it?

It wasn’t all bleak, truthfully. His effort to advance traditional techniques unfurled before the audience’s eyes excitingly. Emblazoning Chinese symbols on blazers, or dividing a jacket between the yin and yang pushed things in a commercialistic direction, but the pieces didn’t lack intrigue. His tailoring has also improved upon last season, and readily apparent is a desire to explore proportion.

Another question that presented itself is the saleability of the Chinese-influenced pieces. If purchased in the West, will the wearer be subject to cultural appropriation allegations? Will they purchased in the East if they are already engrained in the culture and perhaps advancements could be perceived offensively? Only time will tell. One hopes Mr. Zhou remains positive.
Posted by Paulidoodles at 6:00 AM