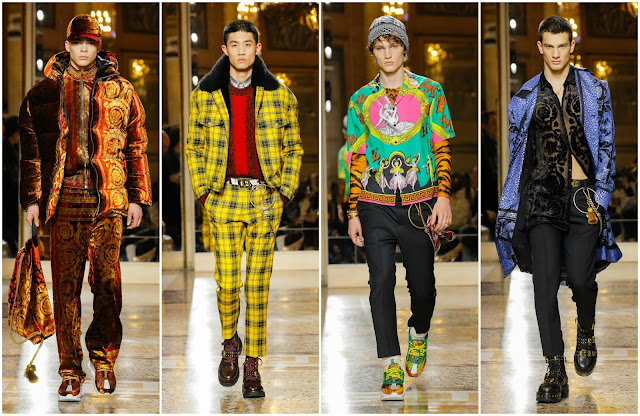 The last Versace womenswear collection saw the revival of the 1990s classics, with Donatella Versace reintroducing the most memorable Gianni Versace shows: Warhol, Icons, My Friend Elton, Vogue, Metal Mesh, Butterflies, Native Americans, Animalia, Baroque. It was to commemorate the twentieth anniversary of her late brother’s death, memorialising his indelible impact on the fashion industry and the feminist undertones that defined his sexually liberating work in the 1990s.

It arrived on the eve of The Assassination of Gianni Versace: American Crime Story, which airs tonight on American television screens. The Versace family has chosen to distance themselves from Ryan Murphy’s series, which is based on Maureen Orth’s book Vulgar Favours: Andrew Cunanan, Gianni Versace, and the Largest Failed Manhunt in US History. The Versace family declared in a statement, “[we] neither authorised nor had any involvement whatsoever in the forthcoming TV series… which should only be considered as a work of fiction.”

Donatella Versace continued to elude the show’s imminence with her Fall 2018 menswear and Pre-Fall 2018 womenswear at Milan Fashion Week on Saturday night. Perhaps inspired by the presence of Versus at London Fashion Week for the past couple of years (although not for the upcoming season as the diffusion is currently without a creative director), Ms. Versace took the brand for a highland jaunt, only briefly referencing the label’s signature animal-print and baroque tendencies. She also combined regal aspects with gloriously lavish and decadent sportswear and varsity references with ‘Versace’-emblazoned scarves.

Her technicolour tartans exuded a spirited sassiness and a sense of humour. Wherein lay the difference between the tartan and the baroque element of the show. The tartan expressed a bolder, tongue-in-cheek version of masculinity, one which expanded upon the camp nature of last season’s menswear. However, the baroque, although elaborate and decadent, lent itself only to an overindulgent life of luxury, presented in the gold-laden hall of the Società del Giardino—a gentleman’s club—and comprehending its grotesquely rich facade was more negatively standoffish than the typical virile Versace boisterousness.

Undoubtedly it casted the audience back to the nineties, a splendorous time in fashion when careers were built—Gianni Versace, Alexander McQueen, John Galliano, Helmut Lang, Martin Margiela were all designing era-defining clothing. It wasn’t so much a tribute as it was a reaffirmation of the evolving Versace codes—irreverence, pervasive sexuality, a fetishisation of empowerment and strength.

Donatella Versace, clearly, as expressed by this show, doesn’t need a television series about the brand’s founder to remain relevant, for she has expertly maintained its importance. However, the discordance between the the aesthetics in this show muddled the expected lucidity.
Posted by Paulidoodles at 6:00 AM