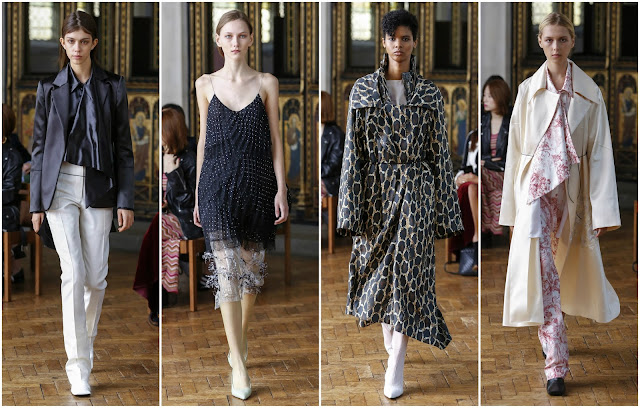 Sharon Wauchob’s membership in the Irish contingent at London Fashion Week is often overlooked. Presenting on the last day of fashion week, in Marylebone at St. Cyprian’s Church, the geographical discord of the day of shows can prove disadvantageous to her exposure. However, she is a seasoned designer, she’s been in the industry longer than most of the designers presenting in London and her aesthetic oozes a glamorous sensuality that few can replicate. Her collections aren’t preoccupied with the politics of today, rather it is a personal response to womanhood. An instinctive approach, she glamourises loucheness and fashions something sumptuously elegant.

This season she was thinking about her beginnings, at Central Saint Martins. She discovered a sketchbook from her time at the college. Her pedigree as a designer strengthened when she worked with Japanese designer Koji Tatsuno. She was appointed, by U2 frontman Bono and his activist wife Ali Hewson, as creative director at Edun where she defined the brand’s position as a sustainable fashion brand. She joined Louis Vuitton in 1997, at the same time as Marc Jacobs, and left in 2001. Her eponymous label was launched in the meantime, she presented at Paris Fashion Week for sixteen years before returning to London, where she studied. It is an important time for her to take stock and reflect on her past, and propose a direction for the future.

As a purveyor of drapery, her output this season was especially strong. Diaphanous organza was layered as if it was the delicate foamy residue from waves; coats were precisely cut but effortlessly loose; tendril-light feather embroidery was added to romantic polka-dot dresses. The romantic touches added to her designs are truly beautiful, in the way they pay attention to the female form but also acknowledge the importance of fabrication.

There is something triumphant about rediscovering an old sketchbook and cataloguing the progression one has made in the creative industries. It is a feeling that reaches beyond fashion design, broaching writing, artful endeavours, editing and skewering other industries—STEM fields namely. Ms. Wauchob’s work wasn’t a greatest hits collection, rather a reiteration that she is an accomplished designer and she is exceptional at what she does.
Posted by Paulidoodles at 1:51 PM