Miuccia Prada has been adapting to the digital age, expressing pointedly feminist statements in her womenswear and questioning the fundamentals of masculinity in her menswear. Her Fall 2018 menswear—conjoined with her Pre-Fall 2018 womenswear—took place at the Fondazione Prada as per usual.

Of late, the creative direction of the brand has shifted, perhaps due to budgetary constraints after the brand’s unsatisfactory commercial performance in the middle of the 2010s. Former collaborator Steven Meisel has been replaced with Willy Vanderperre and Olivier Rizzo—stalwarts of Raf Simons. Seemingly, their aesthetic has been pervasive enough to influence this menswear outing which was reminiscent of Simons’ Spring 2018 Blade Runner-inspired. The clothes essentially ‘sat’ on the models and there was an undercurrent of dystopian doom which marked Simons’ show back in July. 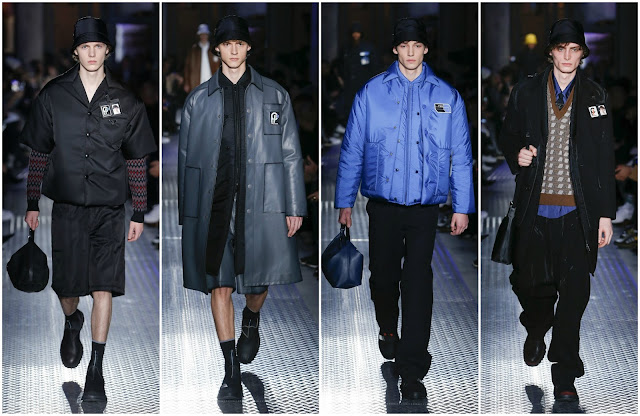 There has been a noticeable lack of romanticism in Prada collections and it corresponds with Vanderperre’s minimalist oeuvre. It’s not to say the collections haven’t been good, the majority of them have been noteworthy and impactful but none of them have provoked nearly as much as they did, as little as three years ago.

The show announced the revival of the banana prints of the exotic Spring 2011 womenswear show; the flames from the 50s-inspired Spring 2012 womenswear; the unforgettable Christophe Chemin illustrations of medieval tapestries and intergalactic love from Fall 2016 menswear. They were all compounded into single garments or outfits. Secondly, returning to the runway was the red-outlined Prada logo which was added to windbreakers. In a time when nostalgia is currency, the reappearance of all these items—recognisable, memorable aspects of recent fashion history—is unsurprising. However, it didn’t really strike one as groundbreaking and the remix didn’t enthral in the way one would expect Prada to.

The show arrived the day after the New York Times’ published a piece documenting sexual misconduct allegations by male models against once-esteemed photographers Mario Testino and Bruce Weber, respectively, both of whom had made inappropriate advances on set at photo shoots. The #MeToo campaign has proliferated over the past few months and it’s clear to see the abuses of power have broached the menswear industry too. Does it make a collection like this, one which preoccupied itself with commercialising nostalgia, redundant? The spotlight on injustices the day previous cast a dark shadow over proceedings, unquestionably. 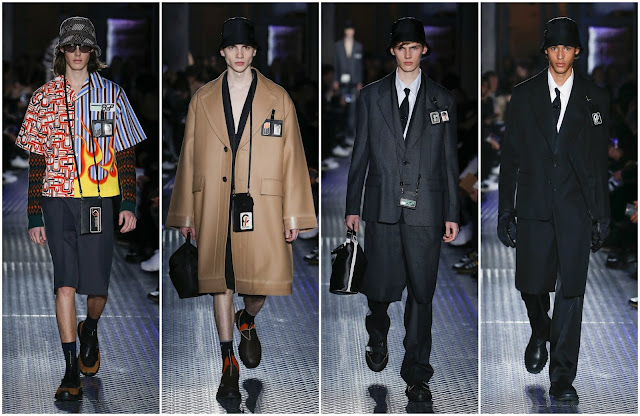