Something made crystal clear at London Fashion Week Men’s this season was that designers were no longer centred around the cisgendered white man. It was a London season marked by its indifference to gender constructs and an affirmation that we live in a post-gender landscape, where men wearing dresses and skirts and make-up and heels is just as common as them wearing tailored suits and masculine silhouettes. Such a statement wasn’t echoed at Milan Fashion Week, where legacy labels like Giorgio Armani, Ralph Lauren, Fendi perpetuated the bog-standard heteronormative male ideal which isn’t as exciting as it once was, in comparison to the new world order carved by brands like eclectic Art School, ebullient Charles Jeffrey’s LOVERBOY and the Elizabethan-tinged eccentricity of Edward Crutchley.

On the opening day of Paris Fashion Week, two brands occupying the post-gender design world were among the first to show. First was Palomo Spain, spearheaded by Alejandro Gómez Palomo, a Spanish outpost that has presented in Madrid, Moscow, New York and now the French capital, at the Place des Vosges in the Marais. Paris is an appropriate place for Mr. Gómez Palomo to establish themselves in terms of the global fashion system. There they will be able to draw a greater an audience than they would at New York Fashion Week: Men’s which is still in its infancy. Also, the unique brand of flamboyant fashion will electrify the city’s reputation; Paris Fashion Week is renowned for the presence of heavy hitters including Rick Owens, Thom Browne.

Seeking perversity in the staid nobility of the countryside, the designer explored the pastoral setting and infused an inherent sexuality in it, one which was both glamourous and mocking. It toyed with masculinity, the masculinity traditionally associated with hunting—there was wool and foxtails and ring belts, but also Little Red Riding capes and fetishistic undertones. Eroticism and masculinity and the boundary between the two was where Mr. Gómez Palomo situated himself. It was there he built a case for Robin Hood and red velvet, Elizabethan pomp and splendidness, a fetishised country dress code and a femininity at odds with models’ hirsute legs stemming from abbreviated hemlines.

Despite the fun, often comical nature of the work, Mr. Gómez Palomo devised a unique strategy—Charles Jeffrey did something similar in London—whereby he channelled his eccentric output into something more commercial and ultimately more sellable. His clothes envision an old-world glamour but are presented with the post-gender landscape in mind, it’s a tongue-in-cheek operation. However, to an untrained eye, it could just be lace-trimmed navy wide-leg trousers or a duck egg, fur-lined jacket. But on their backs would be the product of the mordant critique of an outdated society. Chances are though, Palomo Spain is speaking to the converted. 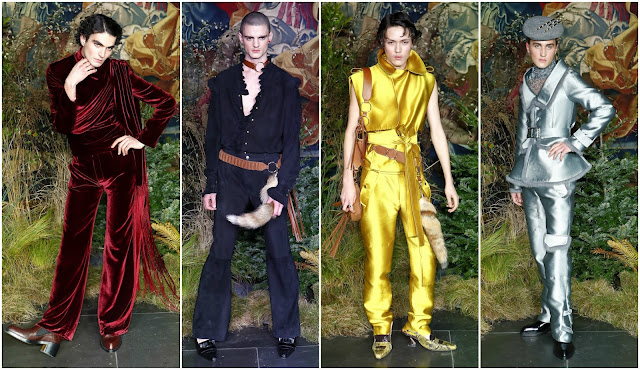 A few hours later GmbH (a German acronym for ‘Gesellschaft bit beschränkter Hafting, or ‘company with limited liability) presented their latest work. Designed by Benjamin Alexander Huseby and Serhat Isik, their presentation at the art-centric Aérosol in the 18th arrondissement was entitled ‘My Beauty Offends You’. An electric show with diverse cast of eccentric characters contrasted society’s perception of beauty with a more unconventional, modern vision, one which encompasses models from various ethnic backgrounds, different gender identities.

Their recent advertising campaign cast second-generation immigrants, calling it ‘Europe Endless’, in an effort to portray an idealistic utopian Europe, one which doesn’t discriminate against immigrants and creates berries, rather welcomes them. It is especially pertinent in their native Germany where the subject of immigrants is a bone of contention in the eyes of the public. Their runway was comprised of the people who were included in the recent campaign and many more.

There were notable reflections upon workwear here, albeit with a slick touch. The colour were sombre—bottle greens and greys aplenty. The models stormed the catwalk, contending with the blustery evening and incessant rain. The atmosphere contributed to the models’ emanation of power. Braving the elements, they were prepared as though to take the world in their stride. Unsurprisingly, backstage, Huseby and Isik spoke about the clothes acting as a means of protection, a recurring motif in the fashion industry over the past few years. Their casting was instrumental in solidifying this—second-generation immigrants, sons and daughters of those who left their own country in search of a better life abroad. It’s a sad but endless tale, one which continues to touch the entire world.

Coupled with a disregard for gender constructs, GmbH, like Palomo Spain, is a brand which is part of the redefining of what constitutes ‘normality’ in fashion.

To show at Paris Fashion Week, to an audience including eminent editors and buyers, solidifies this changing fashion landscape, one which encompasses more than rail-thin or machismo men in sharply-tailored suiting and sportswear. Proving fashion stretches beyond that are these emerging brands. Their collective energy, power, and most importantly, message defies expectations and shifting the un-shiftable—all the power to them. 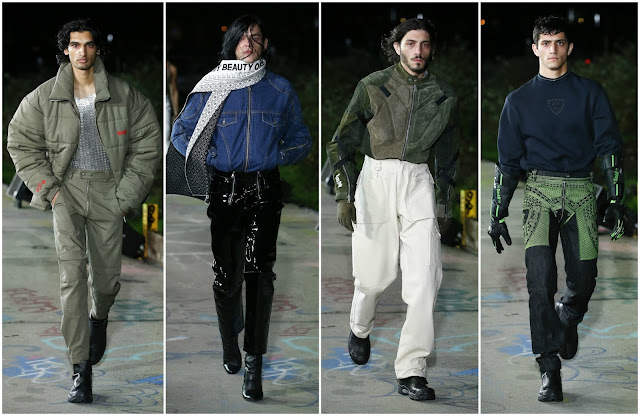 Posted by Paulidoodles at 8:00 AM