Is it even worth attempting to define Renaissance man Virgil Abloh at this rate? The Chicagoan is here, there and effectively everywhere. His high-flying multi-hyphenate life recently extended into the realm of an original song, something he’s working on when he’s not designing for his successful label Off-White.

His menswear is renowned for its pastiche nature with some critics accusing Mr. Abloh of bastardising the archives of Raf Simons, Helmut Lang, Rei Kawakubo, Yohji Yamamoto, seminal designers in the fashion craft. (His womenswear is more instinctive, more original at the best of times.) He presented his Fall 2018 menswear collection at Centre George Pompidou at Paris Fashion Week. He cheerfully emerged at the end of the show, ‘Business Casual’, to offer an obligatory wave to the fervent supporters and those buyers gearing to drop thousands of their budget on his work. 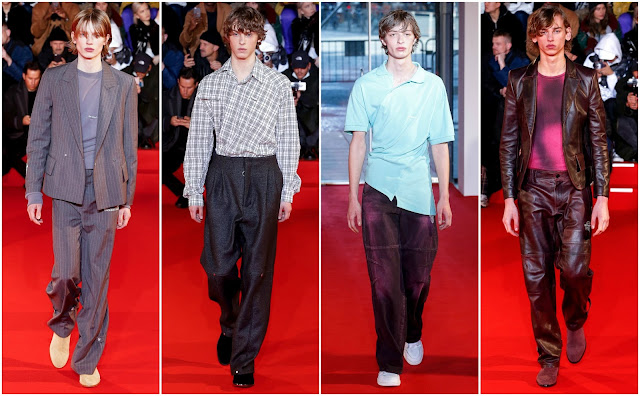 Originality is relative in terms of fashion buying. If it sells, it sells. Mr. Abloh’s primary obligation is to sell clothes and with all the collaborations afoot, he makes this loud and clear. (The past 12 months have been impressively packed—he collaborated with Nike, Warby Parker, Ikea, Jimmy Choo, Levi’s, the New York City Ballet, Umbro, Kith, rapper Lil Uzi Vert; opened global outposts for the brand; performed at countless events in his DJ guise; appeared on the multi-cover issue ten of System.) He showed pinstripe trousers with the logo emblazoned on the hip, tailored overcoats with tracksuit pants and trousers—he reinterpreted the idea of ‘casual Friday in the office’. It grew rather tiresome.

Some things were distinctly reminiscent of the recent Calvin Klein show, spearheaded by one of Mr. Abloh’s design idols: Raf Simons. There were mild appropriations of his Sterling Ruby work and his Western influences which dominated the Spring 2018 show. Other parts, particularly the emphasis placed on peculiar proportions, were evidently redolent of Demna Gvasalia’s turns at both Vetements and Balenciaga. This has always been the case.

The parts integral to the Off-White handwriting, the quotation enclosed words or phrases, were nods to the Beastie Boys and to the theme of business casual. They weren’t overt which is a shame, it is clear to see—from recent jaunts to high street superstores—that they are having a trickle down effect to the fast fashion market. A quick sconce in the men’s section of H&M and one will see dress shoes, each part of the pair labelled either “LEFT” or “RIGHT”… It’s a rather dull interpretation but Off-White is going global, undoubtedly. It is fashion’s latest marketing success story in the post-Vetements landscape.


Mr. Abloh has somehow broached the fashion circle’s impenetrable circle and he’s accepted. It is rather perplexing though, how his hyper-communicative tendencies have won most of the fashion industry over in the way that Kanye West deterred members. He’s on time, at least. 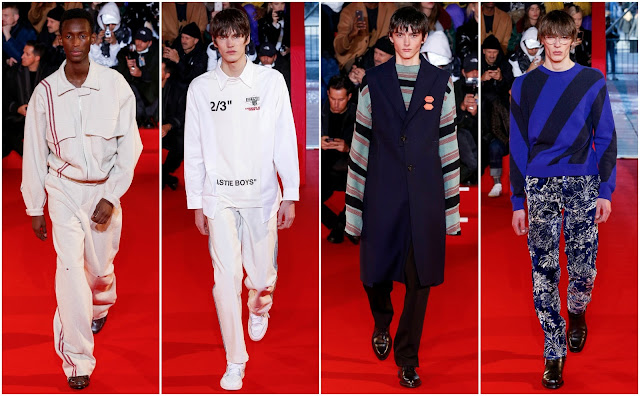