Francisco Risso’s initial response to his appointment at Marni lacked the frenetic, emotional and peculiar touches that were inherent in his predecessor, the founder Consuelo Castiglioni’s magnificent oeuvre. He faced a tall order, Ms. Castiglioni was a well-revered member of the fashion industry and her shocking departure was met with bitter disappointment from the press and buyers. Mr. Risso, her replacement, sourced from Prada, had a rough start in terms of design. The press’ response was lukewarm—and in some cases, quite negative. However, he expressed a different mood with his womenswear in September, and his Fall 2018 menswear echoed a similarity last weekend at Milan Fashion Week. It was as if he kept stalling the engine. Now, it appeared, he finally managed to ignite the engine and accelerate, creating a visual landscape with as many twists and turns as a windy, uncultivated, bramble-defined back road. 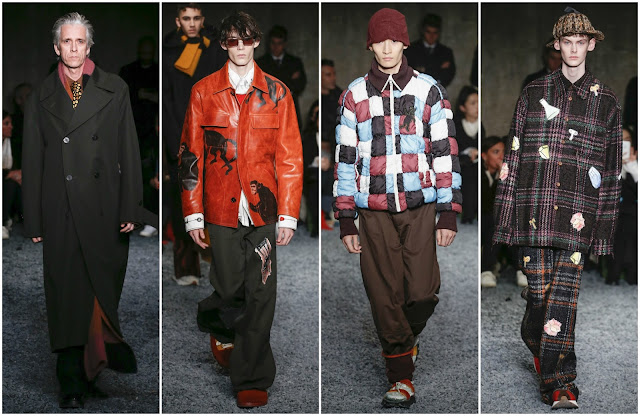 The emotion this critic expressed as lacking last season was well and truly present this season. His seating was made up of nostalgic items. Bumper cars, old microwaves, oil tanks, box televisions, water tanks, children’s playthings. It was an engaging preamble to the show and it was successfully plastered all over Instagram. However, the clothes held more fascination. It opened rather sombrely, with long black overcoats and relaxed 70s tailoring. However, it was quickly electrified with bold prints, rather childlike illustrations, of random objects—chairs, a man on horseback, apes, cellos, helicopters, squirrels, chimpanzees,  a travelling stuffed animal equipped with a suitcase. It was random, offbeat and effortlessly encapsulated the Marni spirit—an indefinable urge to express oneself creatively, akin to the childlike jubilance associated with dressing oneself for the first time.

Ties were crushed—perhaps chewed—and jewellery was layered excessively, has were added, scarves and blankets too. It was a brilliant amalgamation of accessories as much as it was outwear replete with a frisson of excitement and bubbly eclecticism. Trousers were oversized; coats were overlong; coats were rendered in a primitive patchwork; fabrics clashed, fusing high end silks with striped cotton tops; there were boiler suits and fashion’s gravest sin—socks with sandals.

There mightn’t have been much of a discernible message from this. Perhaps the designer wanted to communicating his growing understanding of the house codes and use it as a starting point for future outings, in which he restores the intellectualised painting of modern menswear, which Ms. Castiglioni carved ever so wonderfully. Hypothesising based on this season and last season’s womenswear would prove useful in assuming that there is more good to come from Mr. Risso.
Posted by Paulidoodles at 6:00 AM