MAN is the menswear equivalent to Lulu Kennedy’s Fashion East, the paean to youthful creativity and energy that presents a group show at London Fashion Week Men’s in January and June. This season’s line-up consisted of the returning Art School, fronted by Eden Loweth and Tom Barratt, and Rottingdean Bazaar, steered by James Theseus Buck and Luke Brooks; newcomer Stefan Cooke.

The thing about Art School—and it’s something they have made a decent effort to counteract this season—is that the prospect of it is far more exciting than the actual clothing. For all its vibrance, for all its exuberance, there’s something about the label’s uncontainable effervescence that doesn’t match up with the early-aughts-influenced clothing. For Fall 2018 there were pinstripe schoolgirl uniforms, shirts worn as dresses, belts worn as bandeaus, skintight dresses that would’ve attracted the attention of unsuspecting fan Kim Kardashian West.

The outfits don’t bear as much drama as those brilliant characters who wear them. As a collective, it is brilliant—it stands for queer culture, it protects club cultural, it is countercultural in a way that will appeal to the fashion industry at large. On paper, it works. However, translating this to the clothing has proven tricky. There have been some improvements from last season—the clothes, generally, have a veneer of more experience but much of them look rather bland for what it supposedly stands for. Luckily, with the backing of MAN, the influential fashion editor Katie Grand of LOVE too, they will be given a chance to test the waters and truly establish what works best for them. 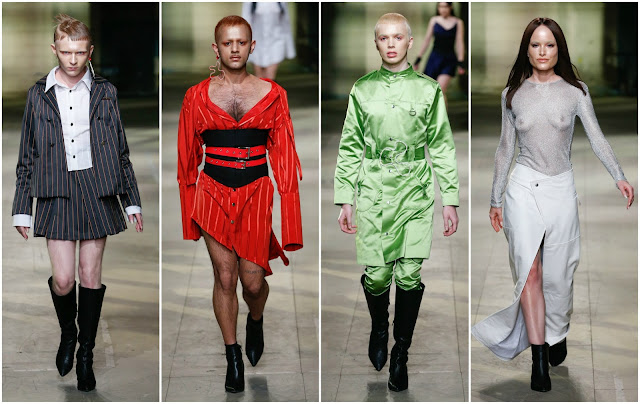 Self-assured, knowing, Rottingdean Bazaar is simply brilliant, with a modern day rendition of pop art, critically analysing the social context and exploring the boundaries one can push with clothing.  A dartboard-cum-sweater? A personalised cheese board on a t-shirts? It channels mundanity into something delightfully perverse. This season’s inclusivity and themes made for their most powerful outing to date.

They harshly criticised contemporary commercial fashion. One of the first models out was a stout man, wearing a t-shirt emblazoned with the exclamation: “We Do Big Sizes! 2XL 3XL 4XL 5XL!!!!”. And in a smaller typeface, “We Do Very Small Sizes!!” was written. Fashion famously caters to a specific body type. It is pertinent for Rottingdean Bazaar to pose a blistering counterattack at this exclusive, unrepresentative systematic failure. They elaborated on this by casting models who didn’t necessarily conform to the traditional sizing in fashion—something they have done in previous collections also—and established a new normal.

They also expanded on commercialism. An oversized red dress, made from buttons, read “Sale” and a striped top in red and green, blue ‘jeans’ were made from sticky price tags. A dartboard top and headpiece featured commonly purchased items such as “Sellotape”, “Duvet”, “Ripped Jumper”. It was all tongue-in-cheek, delightfully humour, and a welcome departure from the perpetuation of dour thematic influences in fashion today. Do not be confused: this wasn’t escapism, this was plonking the audience front and centre and facing the facts of commercialism and the crippling exclusivity of the fashion industry. 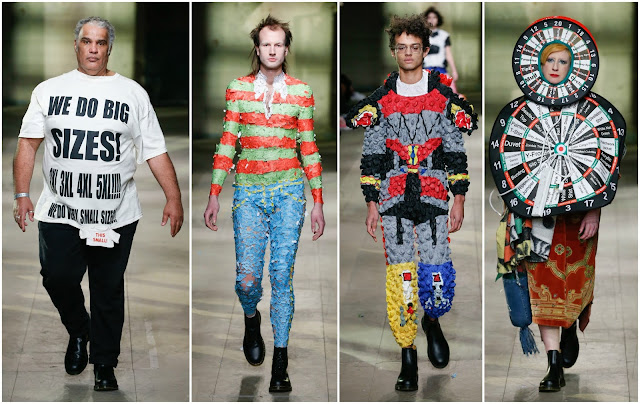 Emerging talent Cooke’s debut was spectacular. This time last year the London-based designer was gearing up to present his MA collection at the Central Saint Martins group show at London Fashion Week. His MA won him the prestigious L’Oréal Professionnel Creative Award. Since then he has appeared in the pages of magazines globally and Fall 2018 marked his breakout show, with an on-schedule placement. His mentality is to revitalise and elevate the everyday wardrobe and to subvert the sensory experience, manipulating the fabrication to conjure a peculiar response.

He takes the conventional items: trousers, coats, jackets and sweaters and reworks them in odd ways. For example, his trousers are materialised piece by piece, like a jigsaw puzzle. Similarly, the coats are origami-like in their assembly. Argyle sweaters are disembowelled, with diamond shapes precisely removed. Light shining on PVC gives the illusion of buttery leather and the paintwork resembles denim in a disconcerting display. There is an almost claustrophobic off-ness to the garments that begins to play with the mind—it is a newfound interactiveness in fashion.

(Removed from the inclusivity of both Art School and Rottingdean Bazaar was Stefan Cooke, whose work presented a stereotypical vision of masculinity in fashion. His models were rail-thin for one, with slicked back hair, hollowed cheekbones. His models were also mostly white. It starkly contrasted with the other two. In the way Art School’s underwhelming clothes don’t reflect the extravagance of their perspective, Stefan Cooke’s models don’t reflect his searing, unique, instinctive fashion.)

Designers like Cooke are in desperate need of nurturing. Talent incubators like MAN, Fashion East must continue to mentor brands like this to ensure their viability. One expects to see great things in the future from him. Like many others, perversely dissecting mundanity has proved to be a tenet of modern fashion. Cooke’s cultivation of new territory on the trope is what excited the audience who bestowed upon him a rapturous applause. He’s off to a great start. 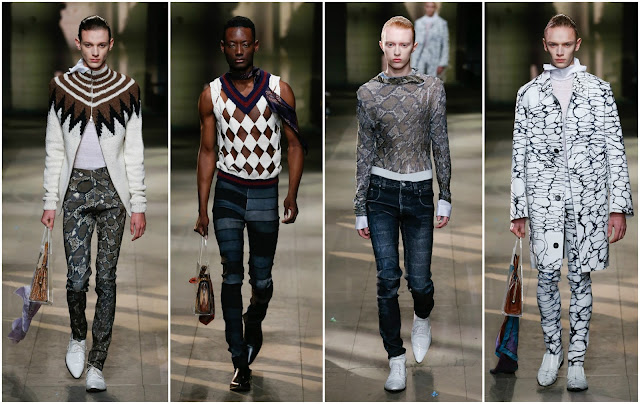