There is something so wonderful about the fusion of something grand, opulent with something kitsch, ironic. Designer Alice Archer compounded two art references in her Spring 2018 show at Mary Ward House at London Fashion Week last September. The American portraitist John Singer Sargent painted characters from all walks of lights, capturing a glimpse of their personalities and aspirations. There is an inherent element of innocence to his work which Ms. Archer sought inspiration from. She contrasted this with the garish boldness of photographer David LaChapelle’s modern pop-art oeuvre with its highly saturated colouration.

She then transported these references to the South of France, to the south of Italy. She was thinking of the summer months languorously spent on the Riviera, at the Cap d’Antibes or one of the other affluent coastal communes on the Côte d’Azur; also, bearing in mind the July Sicilian sun shining overhead, illuminating sunbathers. There were lemons aplenty but also grapes, cherries and strawberries. They acted as an elixir, breathing an exotic air into the clothing. 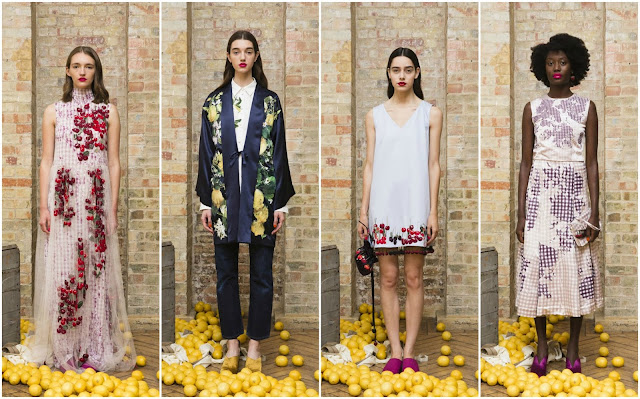 Hailing from the Royal College of Art, Goldsmiths and Central Saint Martins, her credentials don’t stop there: she was employed as an embroidery designer for Dries van Noten, the pinnacle of luxury fashion, and produced work for British artist Tracey Emin also. Integral to the brand is her textural prowess, the way the embroideries act like a life-force in the collections, imbuing them with a warmth and depth without which her designs would be rendered uninteresting. Embroideries of fruits and flowers brought a three-dimensional quality to the frothy tulle dresses.


Ms. Archer’s approach to the summer season, to Sicily differs wildly from many other designers today. For the Dolce & Gabbana duo their collections are paeans to the Italian island, it is a fertile source of inspiration but they continually reproduce the same idea with the same effect as beating a dead horse. Marco de Vincenzo emblazoned medieval names of the island on his clothes for the spring season, rather esoterically one notes. The advantage of Ms. Archer offering her input is that it is one of the outsider, the tourist. It reminds one of exploring a new destination for the first time. Ultimately, she succeeds in capturing the universality of holiday excitement.
Posted by Paulidoodles at 6:00 AM