At Couture, a Reminder Racism is Still Not Fashionable 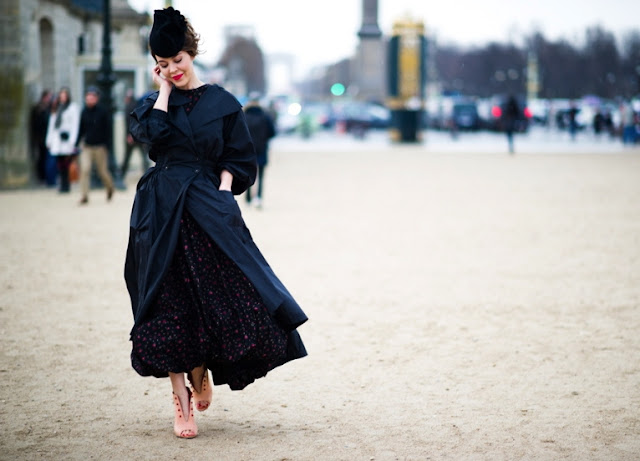 Russian socialite and fashion designer Ulyana Sergeenko’s Spring 2018 Haute Couture presentation was about “creating stories through memories and emotions.” Fittingly, she created the biggest story of the Paris haute couture shows when a friend of hers, Buro24/7 founder and street style star Miroslava Duma posted an Instagram story of a handwritten note she had received from Ms. Sergeenko. The note which contained racist content, a reference to Kanye West and Jay Z’s 2012 single ‘Ni**as in Paris’, was plastered across social media and quickly gained traction on news sites. It read, tastelessly, “to my ni**as* in Paris”.

Model Naomi Campbell reposted the image of the memo on her Instagram story, demanding to know the truth behind the image.

Ms. Sergeenko’s presentation on Tuesday was boycotted by members of the fashion industry who—in the post-Galliano-incident landscape— have grown increasingly intolerant to such injustices. Was her show attended by many? Based on Instagram stories, where this story originated, one could issue a resounding “no.” It appeared her comment, highlighting bad taste and outdated attitudes, deterred guests. Those who watched the show would be complicit. (The brand still posted the lookbook to Instagram despite the media maelstrom, and presented in their showroom. According to Garage Magazine's review, Ms. Sergeenko was defensively glued to her phone throughout the appointment.) 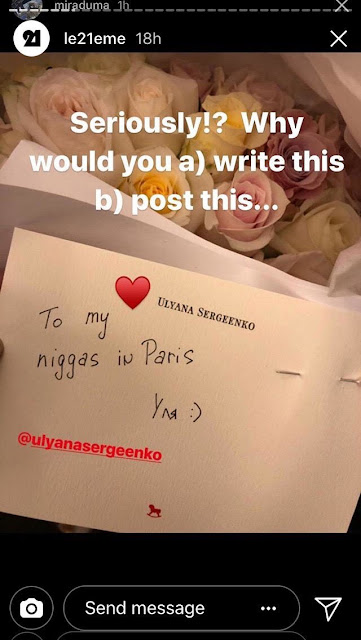 “I deeply respect people of all backgrounds and detest racism or discrimination of any kind,” read Ms. Duma’s apology on Tuesday afternoon. It would appear the definition of “racism” and “discrimination” had escaped the Russian at the time of posting.

Ms. Sergeenko’s *apology* was about as much reviled as her initial comment. She weakly tries to use her East Kazakhstan upbringing and her daughter’s half-Armenian blood as an excuse to say the N-word. “And yes, we call each other the N word sometimes when we want to believe that we are just as cool as these guys who sing it.” Amusingly, she asks that people withhold their anger seeing as there is so much of it in the world already. “Can we stop it here?” We most certainly can not. Thankfully the internet exists to hold someone like Ms. Sergeenko accountable for her actions and spotlight the fact that the N-word will never be fashionable amongst white people...

Will she be subjected to the Galliano Treatment? If so, she will be exiled for a number of years and the industry will pretend she no longer exists and then they will welcome her with open arms all of a sudden, proclaiming her brand one to watch again. (Will her army of famous friends rally around her or refuse to be tarnished by the incident? That remains to be seen but one hopes they condemn the act.) Chances are, the brand will survive amongst those oligarch wives who’ll keep it in business but one doubts the fashion industry or the Fédération de la Haute Couture et la Mode Paris has enough interest in her or desire to keep her around for much longer. Her designs were never particularly enrapturing to begin with, they lacked intrigue and their repetition grew tiresome.


Ultimately, this is a news bulletin reflective of the couture circuit. How so, you may ask? Well, the attendees of couture shows are the ultra-rich, whose disgustingly lavish life is defined by an unabashed affinity for excess and decadence. They hail from Russia, China, America—they are new money, they are old money. Many of them won’t be responsive to Ms. Sergeenko's abhorrent comment. Why? They’re too rich to care. That’s what couture is about after all, isn’t it? Beautiful dresses costing millions that are ordered nevertheless, simply because the buyer is so wealthy they can afford to do so. The 1% lives on.

Posted by Paulidoodles at 8:00 AM