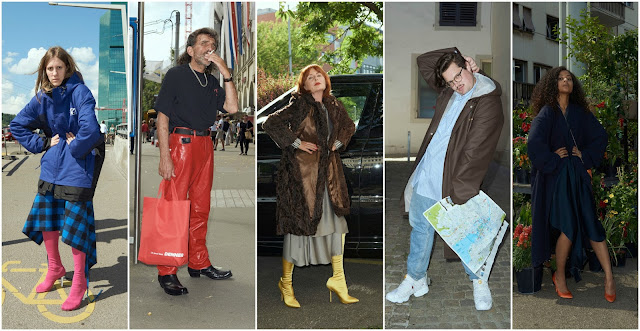 You might be wondering, where did Vetements go? Yes, Balenciaga creative director Demna Gvasalia’s other brand, the one that amassed a cult following and attracted Kanye West and Jared Leto to a seedy sex club at Paris Fashion Week a few years ago, and counted every fashion editor under the sun as a fan. Simply, they’ve absconded to Switzerland. “Paris kills creativity,” Guram Gvasalia shared with Swiss newspaper TA earlier in the year. However, the decampment goes beyond the torment associated with designing in Paris. Switzerland’s favourable tax regimes has attracted many multinational companies. The environment just so happens to suit the narrative. Perhaps that’s the cynics answer to the news, but isn’t Vetements the prodigy of cynicism, seemingly questioning the establishment when it is in fact a business-savvy corporation raking in millions from disgruntled shoppers and scions of wealthy families.

For Spring 2018, away from the circus, they deployed a photographer and the in-house team to the streets of Zurich, asking citizens if they’d like to feature in the lookbook as they went. The cast of characters were, in true Vetements fashion, unconventional. They weren’t the Kendall Jenners of the world, rather the forgettable faces of the everyman. This season there were Tommy Hilfiger sweaters and luminous Umbro exercise tops, red leather trousers and disembowelled fur coats. Many models had their bodies inverted with their hands on their hips, mimicking high fashion of yore. The resounding atmosphere was that of ‘normal people’ partaking in high fashion, generally reserved for the .1%.

One got the impression that Gvasalia was settling in with the clothing lacking the usual intrigue, sardonicism. Undoubtedly it’ll be rectified in seasons to come as Zurich becomes the creative hub for the brand and familiarity sets in. For now, it was subtle advancement of a successful, tried and tested formula.


If there was one important take away from this it was the decentralisation of the fashion industry. New York, London, Milan and Paris face competition from emerging markets in Copenhagen, Sydney, Tbilisi, Seoul. Designer Matty Bovan, showing at London Fashion Week, works in his parents house in York; similarly, Rottingdean Bazaar on the menswear schedule operates in Brighton. Although their false radicalism is meretricious to the max, something to learn from this is the possibility in forging a career in fashion in far-flung destinations. Vetements challenged fashion with its unorthodox veil, what’s to say an upstart can’t from Jaipur or Jakarta, Helsinki or Houston.
Posted by Paulidoodles at 6:00 AM

Email ThisBlogThis!Share to TwitterShare to FacebookShare to Pinterest
Labels: Vetements