In 2016, two promising and buzzed-about labels blossomed at London Fashion Week’s annual Central Saint Martins MA Fashion show case. Michael Halpern and Richard Quinn burst onto the scene in startling fashion, with a dazzling array of colour and embellishment. Their work posed a dichotomy: on one hand it was avant-garde, their approach to fabrication and presentation differed wildly from the demure, modest creations of the day; but it featured the interplay of the disco and debutant balls, something spectacularly colourful and incredibly glamorous—glamour petered out of fashion in the early-2010s but Gucci’s new creation direction, led by Alessandro Michele, restored the unabashed glamour and maximalist streak to fashion proceedings.

“A return to glamour—that’s my whole ethos,” Michael Halpern said in an interview with CSM’s 1 Granary website. To serve unadulterated glamour, a frisson of excitement, is one thing—it’s something done by many—but where it diverges from the pack is in its Studio 54 sensibility, and the way he alchemises low-quality fabrics, fashioning them into a more sophisticated entity. His exploration of fabulosity to be found in grittiness continued in his sophomore season at fashion week. At the London Palladium, in the heart of the city, he displayed the latest extension of his otherworldly glamour, in which rich jewel tones triumphed in a tantalising throwback to the Bob Mackie-era of fashion design. In a way, it was like a more abstract and effective version of what Peter Dundas is trying to do. With swishy trousers and trains collecting behind the models, it was a delightful affair, awash with a newfound energy and a rendition of tropes from the past.

Halpern is undoubtedly one of the most popular designers on the London schedule at the moment. His designs are a hit with Bergdorf Goodman’s Linda Fargo who continues to place orders, her customers are demanding more and more from the American-born, London-based designer. Not only did he build upon his brilliant offering of trousers and skin-tight party dresses, he let his architectural prowess run wild, with accordion shapes navigating the body. Extravagance is a prerequisite: it opened with Aymeline Valade in a black and white dress with a thigh-high split and a Balenciaga-inspired cocoon jacket in snakeskin. His work is the bisector between the grotesquely glamorous and the glamorously grotesque. 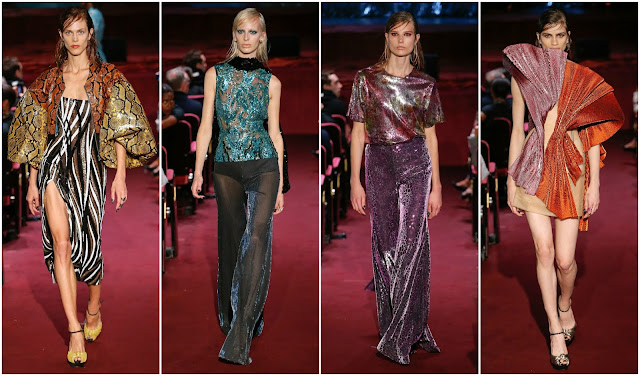 “I wanted the excitement of fashion. Like back in the early days, with cut and colour and texture and presenting an actual thing,” Richard Quinn said after his graduate collection in 2016. His Spring 2018 show, his debut on the London Fashion Week schedule, titled a One to Watch by the governing British Fashion Council: fancy fetishism on a Saturday morning, 8:30 sharp, ahead of a long day of shows! Quinn’s spectacle took place in the new womenswear hall at Liberty, the department store just off Oxford Street. His collection picked up where his graduate show left off eighteen months previous. Tablecloth florals were compounded, a bucolic fantasy fit for a fantastical realm. The gimp suits added an air of mystery, a visual metaphor for the possibility associated with dressing: who is the woman? In these clothes she could be anyone.

The drama reminded one of early Alexander McQueen shows, when the spectacle of fashion shows hadn’t been tarnished—or enhanced, depending on your viewpoint—by Instagram and Twitter. The subterfuge of the crowded styling makes it appear much more complicated than it is. It didn’t have a political agenda, nor did it serve to question ones belief systems. Its complicated colouration, combining garden florals with velvet block colours and metallic sheens—the amalgamation of these things was imaginative and energising. It was bold and visually confrontational. It was almost arresting enough to urge one to put down ones phone and pay close attention. Fashion needs more moments like that. 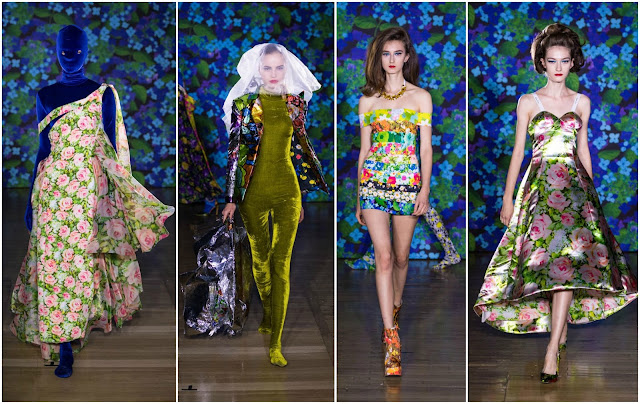