The Fashion East incubator programme at London Fashion Week, founded by Lulu Kennedy, has arguably become a fashion social experiment. Which designers will last? That is often the question when one exits the show space from a buzz-worthy spectacular from London's newest talents, itching to making their mark in the minds of the fashion press and buyers, hoping to use the mentorship to their advantage and build viable businesses. However, it's not always the case as the industry becomes increasingly overcrowded and funding is sparse. At this season's Fashion East there were five designers spotlighted, three of them were featured at a catwalk presentation on the Charing Cross Road, in a bleak, industrial milieu, and two in a static happening in two houses off Brick Lane. Supriya Lele, A Sai Ta returned for second seasons, Matty Bovan concluded his journey with the initiative with his third show before he branches out into a solo outing in February. Harry Evans and Charlotte Knowles were the two designers debuting on the schedule.

Supriya Lele fuses her British identity with her family's heritage (she is the daughter of Indian immigrants) and the boundaries between masculinity and femininity. Spring 2018 marked her first runway show, which enlivened her work. Last season, it was annexed beside the main affair. She explored the drapery present in saris, representing in modern ways. Hers is a romantic touch, differing from the atonality of her contemporaries. Ms. Lele's use of a rich colour palette of inky colours and her choice of plasticised fabrics add a three-dimensionality to work that could be mistaken as banal on first glance. There is a glamourised underbelly to her work, as if a trash bag left on the side of the street had been magically fashioned into a mini dress at the flick of a wand. It makes her work dynamic and she is quickly mastering  the technique of rejecting banality, finding something new. 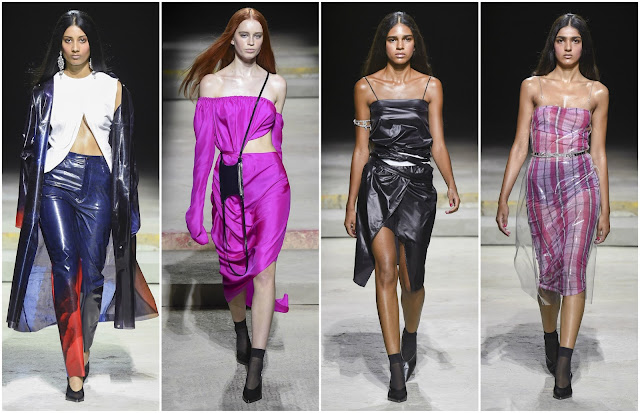 There was also a sense of refinement in Yeezy and The Row alumni A Sai Ta's work. Affectionately known as Asai's Takeaway on social media, this brand channels 'rags' into 'glad rags' in a eccentrically artful manner. One appreciated his dissection of Asian stereotypes. For example, the Burberry tartan skirt, deconstructed and frayed and a pinstripe tartan coat, alluding to the counterfeit culture to which billions of euro are lost to annually. However, the overall appeal of his work didn't strike a chord in the same way as Ms. Lele's. 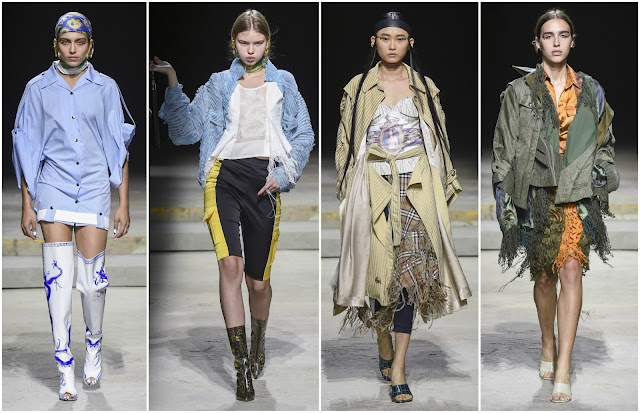 Matty Bovan is an interesting designer to this critic. He is the one who has received laudatory praise, the most support from industry insiders. However, his work doesn't appear to translate to much. His disco dystopia isn't particularly enrapturing, nor does it equate to much other than loud fodder. It's fashion with heart but fashion without brain. It almost blends into Asai, whose work is virtually indistinguishable from Bovan's. To worsen matters, it is clear from the arrangement of photos on online publications, which don't include a picture of the designer taking their bow, that without a caption in the finer text, these two, even to a trained eye, represent too similar an aesthetic for them to work alongside each other. It is indicative of a wider issue in the industry which is that a lot of the work produced and promoted bears striking similarities to the works of its contemporaries. Perhaps it's the times we live in and the cross pollination of ideas, but it is rather inconvenient for both of these fledgling careers.

Secondly, both Bovan and Ta have an issue with commercialising their work and developing a business, something which is in direct contrast to the slickness of Supriya Lele. It's all well and good to witness the frisson of their designs on the catwalk but in the nascency of their careers, there has to be an inkling that this could become much more. They don't have the financial luxury of crafting two—or thirteen—collections like Comme des Garçons which has a dramatic, otherworldly presence on the runway in Paris biannually and drip feeds the meat and potatoes of a wardrobe into stores throughout the year. And how awful it would be for the designers to become nothing more than those selling printed t-shirts. The night is still young where these designers are concerned, they must learn to make the most with it. 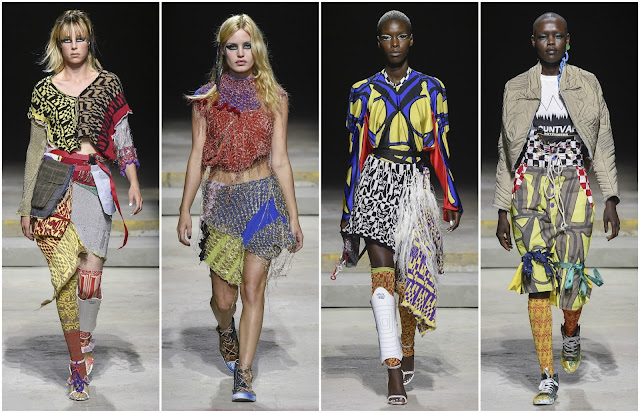 The two that caught my eye were the ones who presented an intimate presentation. A world-building exercise for a first show is a brilliant move. It enlightens the audience, giving them a glimpse inside the world and aspires to draw them. Not only did their work reflect the purpose of the Fashion East mantle, to showcase young, emerging talent but it represented unique subcultures in this juncture in society.

Take Ms. Knowles for example, deconstructing the representation of femininity and female sexuality in the context of swimwear in her debut. In a male-dominated industry, Knowles alluded to dismantling patriarchal ideals of what sexiness is and what is considered 'appropriate' for the beach. She teetered the fine line between strength and fragility through her fabric choice and styling, encouraging the audience to examine the boundaries between the two. Her work was loosely inspired by her internship with Shayne Oliver, at Helmut Lang. His bold attitude toward the presentation of sex and sexuality on the catwalk contrasts which much of the formality seen nowadays. Ms. Knowles flies a similar flag.

Considering the challenges faced by young designers, from balancing books and attempting to sustain a business despite the circumstances being stacked against them, she managed to craft a nuanced output. She spoke of the misrepresentation of locations by travel websites and the bleak reality faced by tourists when they arrive, unsuspectingly, in undesirable destinations. It evoked the feeling of the theme of appearance versus reality, an undercurrent of modern society with the advent of social media. It also channelled a grit, a rawness that was at the crux of Shayne Oliver's Hood by Air. 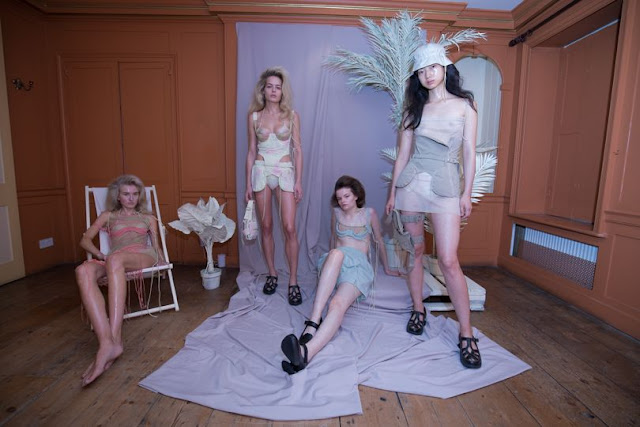 The gender non-conforming models of Evans' production wore clothing that reminded one of a heightened, Gothic rendition of Gianni Versace's work in the 1980s. When better than now to channel this in his work, with the 20th anniversary of Mr. Versace's unexpected murder in 1998 looming, on the eve of Ryan Murphy's American Crime Story: Gianni Versace and the spectacular moment at Milan Fashion Week when Naomi Campbell, Cindy Crawford, Claudia Schiffer, Helena Christensen and Carla Bruni-Sarkozy strut to 'Freedom' by George Michael in the final moments of the Versace show. It is Evans' generation, with an interest piqued by nostalgia, no doubt to the cultural upbringing by Instagram, that will tap into these moments, and strive to relive the 'glory days of fashion', so to speak. It exemplified a savvy approach to a first collection. 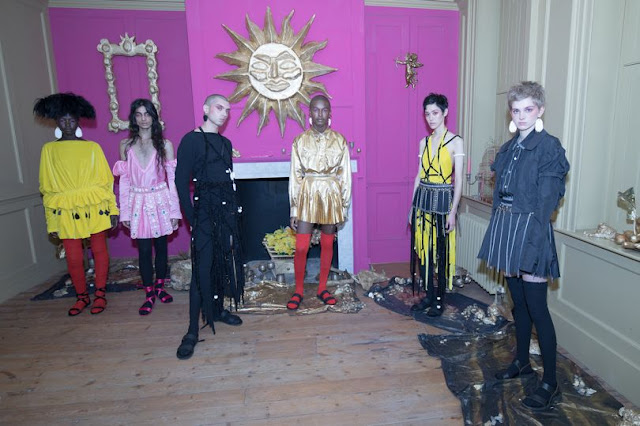