One imagines the Yohji Yamamoto man is as distinctive as the clothing he wears. Presumably, his playlists—or rather vinyl collection—are punctuated by glam rock, punk rock and smatterings of metal. His scent: musk, unquestionably. He reads Kazuo Ishiguro but has a soft spot for the romantic poetry of John Keats, while sipping a double-shot espresso. His mysterious charm isn’t lost on the swathes of clothing he assumes.

Seldom does Yamamoto venture far from the confines of his trusty monochromatic palette but this season by imbuing the collection with shades of fuchsia, aqua and navy, red and patterned painterly additions. The generous silhouettes deployed, rendered in these new colours, added an edge to Yamamoto’s show. The Paris menswear schedule is dominated by the big names: Thom Browne, Rick Owens, Balenciaga. However, more thoroughly enjoyable is a quietly poetic assessment of the direction of men’s dressing.

Yamamoto considered how men are particularly fond of borrowing from their girlfriend’s wardrobe nowadays. Nothing was distinctly feminine or masculine—the lines were blurred with billowy proportions. It wasn’t so much about gender-blending or gender-bending as much as it was about “I don’t just want any soft touch,” one of the calligraphic etchings read on a garment. Painterly brushstrokes were added with Suzume Uchida’s self-portraits and an emblazoning of actress Eiko Koike, scattered. It wasn’t an homage to the woman in his life; perhaps it was an “acknowledgement”…

Much is made of the way Yamamoto’s PR team elects not to issue a press release and Yamamoto’s patchy English can often prove tricky to interpret and his comments often taken out of context or misunderstood by the fashion press. In a way, the only person it leaves scrambling is the lazy journalist. One see this as an acknowledgement to women in men’s lives, and also contemporary culture with the way textual strips are applied to garments and images of Japanese actress Eiko Koike are used.


Romantic sensibilities run through the show and give it a necessary summery glow. Yamamoto’s work can often be imposing, presented exclusively in dark, gloomy shades in dark, gloomy venues, reflecting the state of the world. This season’s colourful affair was powerful in that it didn’t stray too far from what one has come to expect of the Japanese designer’s semi-autobiographical oeuvre and it innovated itself—trends are an afterthought, the Yohji man doesn’t adhere to those. 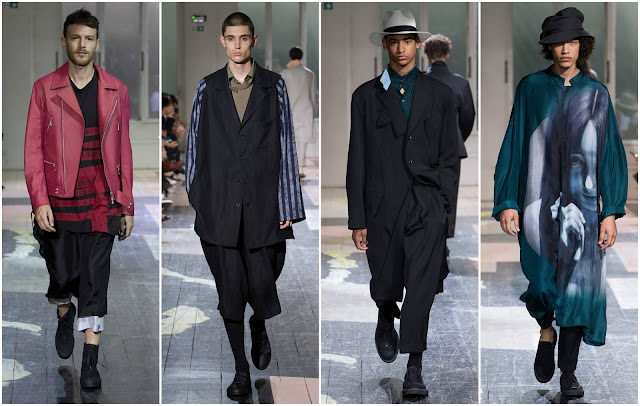