Ryan Lo gained British citizenship recently. The designer was born in Hong Kong and to celebrate he paid homage to the Royal Family in his Spring 2018 show at London Fashion Week. It was a show that preceded Monday’s announcement that Prince Harry is engaged to be married to American actress Meghan Markle in summer 2018.

The world commemorated the 20th anniversary of Diana, Princess of Wales’ untimely death on August 31, a mere fortnight before Lo’s presentation. The unforgettable name reentered public discourse this summer when new items surfaced about her life. Her wardrobe was a valuable asset, connecting her with the public. How could one forget the famous ‘Revenge Dress’, or her jogging through Central London on Christmas Day dressed in a Harvard University hoodie? Lo was thinking of Victoriana lace, pussy bow blouses and her trusty trench coats, rendering them subtly in his distinctive kawaii aesthetic. The fanciful frocks featured frills, tulle dresses were accented with floral embroidery. It didn’t subscribe to the traditional saccharine princess role, as those Docs would suggest, but it was about becoming her own “white knight.” Diana, similarly, wasn’t a conventional princess. 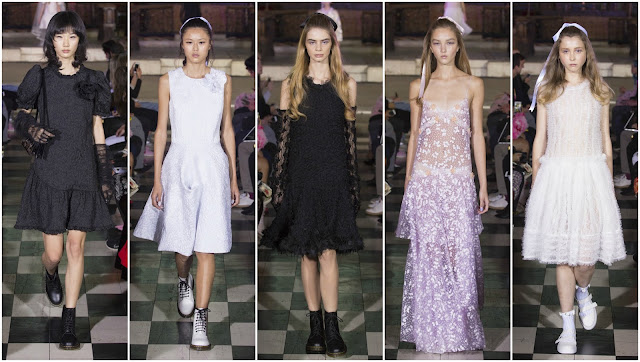 The prim purses carried by Queen Elizabeth II at her public engagements were present here, created in special collaboration with Launer. Launer is the brand which makes the Queen’s handbags. Lo’s were far from the shapeless shift dresses the Queen wears. They were whimsical, decorated with delicate embroideries. Gentle daubs of pale pink and lilac were applied to outfits to inject them with a feminine joie de vivre. The connection with royalty came in the form of those reliable little black dresses which Lo astutely noted are a scarce commodity these days.

The fascination with the monarchy—a questionable form of government, some might say—is as fascinating as the monarchy itself. Zadie Smith’s sardonic wit dissected the public interest in Her Royal Majesty in Edward Enninful’s debut editorial effort for British Vogue. She notes the “distinctly lower-middle class” mental picture many have of her, for her pragmatism and fondness of Antiques Roadshow. It’s an image which starkly contrasts with the news item that het “private estate invested millions in offshore funds”, according to the Paradise Papers. It was a celebration but is celebrating ideal when the slowing British economy continually borrows from the public purse to pad the Royal Family?


Moreover, with questions around citizenship in the United Kingdom constantly under scrutiny post-Brexit it is a statement unto itself for Lo to be a headliner at London Fashion Week. Secondly, the focus and direction signal displayed here show his desire to prove himself to the fashion industry but also to the customer. He’s not a one trick pony. Perhaps Her Royal Majesty would be interested in one of his frocks for the Royal Wedding in May.
Posted by Paulidoodles at 6:00 AM