“In the end, you can’t talk to everyone.” This is a quote from seminal minimalist designer, German Jil Sander. This is a powerful stance in an age where almost all brands are desperately seeking new ways to be relevant and appeal to everyone at once. Simply, it’s an impossible task. No matter how hard you try, no matter how close you come, a designer’s work is reserved to a certain group of people, whether they be likeminded in aesthetic or profession. Jil Sander stands for purist lines and fluid silhouettes, at the core of it all is minimalism, a design movement which holds a very different meaning today. Thirty years ago it was a pioneering, radical design movement and in the 1990s and 2000s there was a preference for glamour and sex, and in the 2010s a period of maximalism was ushered in. Hence, minimalism’s place in fashion has been renewed.

Interest in Jil Sander has also been reaffirmed after the exiting of Rodolfo Paglialunga, a Portuguese man with an unsuccessful three-year tenure at the house, and the hiring of his replacements: Lucie and Luke Meier. Lucie’s name may ring a bell as she was the placeholder designer, along with Serge Ruffieux at Dior following Raf Simons’ sudden departure, and Luke is the former head designer at Supreme and founder of OAMC, a high fashion streetwear label. They mostly succeeded in not attempting to talk to everyone with their Milan Fashion Week debut during the Spring 2018 season, an open-air consolidated menswear and womenswear outing in September. If anything, their appointment serves to energise the brand. It will inject some youthful flairs. 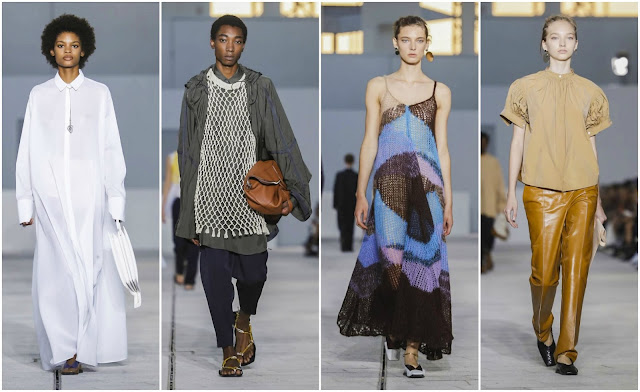 Evolution is on the minds of the two designers. They paid homage to the serenity and clean lines that punctuate the house but introduced some new things: long fringe, netting and homespun fabrics which added an earthy touch to proceedings. They managed to balance commercialism with creativity and certainly maintained interest throughout the show. However, the juxtaposition of the long fringe and the minimalism jarred; the severity of the aesthetic strongly opposed the decontracté nature of the fringe.  Dealt with deftly were the homespun fabrics. They imbued tactility into colour-blocking which is uncultivated area for the brand. Secondly, one spied an oversized windbreaker on the runway which, unquestionably, is a signature of the streetwear minded Luke Meier. Thankfully, evolution didn’t come at the expense of over-saturating the brand with Luke’s streetwear knowledge or Lucie’s couture expertise.


Jil Sander, unlike Gucci or Lanvin, is a brand which is impossible to disembowel and reinvent entirely. Absolute reinvention is reserved for brands without a distinctive handwriting. Her minimalist oeuvre cannot be radically changed or tugged in an entirely new direction. The Meiers covered new ground, certainly, but they didn’t overemphasise the more decorative parts of the collection. Rather they were suggestive of an extension to what we’ve come to expect from the cool, crisp German brand. The best looks comprised of a camel macintosh, black trousers and a colourful knit sweater; and a beige short-sleeve shirt with ruched sleeve and pleated leather trousers in a butterscotch shade—they skewered the past and the present and if this collection achieved some things, that should be atop its list of accomplishments.
Posted by Paulidoodles at 6:00 AM