The Reassertion of French Identity at Paris Fashion Week // Spring 2018 // 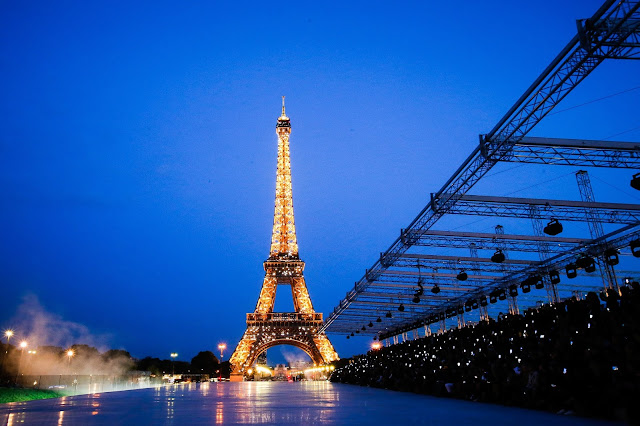 President Macron is in power. He has plans to revive the French economy. He wants to reduce unemployment and make it easier for companies to create jobs. From the outset, the French economy envisages to restore itself. The country resiliently responded to terrorist attacks that threatened to shatter the foundations of the country. The landscape of French fashion has changed considerably in the past two years. Following the November 2015 attacks in Paris, the July 2016 vehicle-ramming attack in Nice, the French fashion industry has responded in two ways: the work has either been bequeathed with a sense of sombreness, understandably, or an electrifyingly endearing expression of earnestness, filling it with hope and optimism.

The Spring 2018 season has seen Paris Fashion Week’s designers collectively galvanised into reasserting French identity, what it means to be a French fashion brand. It kickstarted on day one, with Simon Porte Jacquemus’ excitingly sophisticated and sexy turn at his eponymous label. Inspired by images of his mother—the late Valérie Jacquemus who sadly passed at the untimely age of 42—in love, on the beach during the summer months in their native Marseille as well as the balmy influence of the Caribbean, it was Marseille to Martinique, a cross-cultural study in the sensuality of summer. Jacquemus sought to repopularise the sarong, the sunhat; he did it expertly, materialising a modernist version of the former. 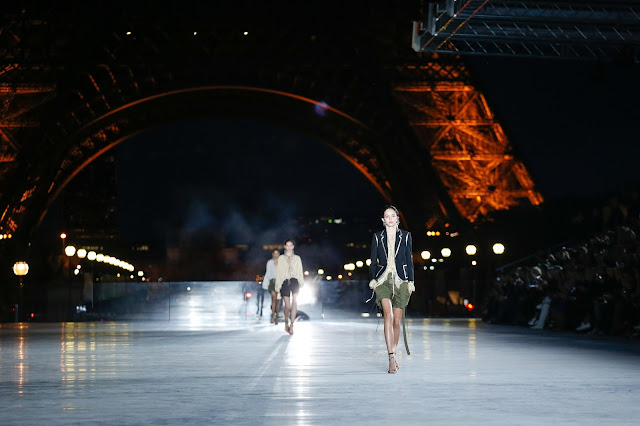 There’s something about the French and the idea of insatiable, unabashed sexiness. One doesn’t see it as a preconceived notion or veneer, crafted by outsiders, rather something tangible and true. Although Italian-Belgian himself, Anthony Vaccarello is designing for arguably one of the most famous fashion houses of all time: Saint Laurent. By definition, his work epitomises “sexiness”. Having paused operations at his namesake label, he charges Saint Laurent with a similar notion of empowering sexiness for the modern woman. Pierre Bergé, Yves Saint Laurent’s sidekick and driving force in the business at the time, passed away recently. His death brought about this archival trawl for Vaccarello who, in his third season now, finally gave the audience something to truly be enraptured by.

From the 1960s to 2010s, the house’s history unfolded before the eyes of the industry. In a comprehensive roundup, Dazed unpicked Vaccarello’s reference points. There was the black and pink colour combination; angular white tape jackets; le pouf, a rather splendid ballooning of fabric reappeared, having started in the 1950s; extravagant ostrich feathers; evening gowns were hiked up, creating voluminous proportions at the upper body. What made the show so thoroughly enjoyable was its homage to the founder and using proportion as a means to convey the breadth of his power.

Elsewhere in Paris, in the Saint-Germain district, a football club is situated. PSG, as it is affectionately known at by stalwarts, is one of the richest football clubs in the world. Christelle Kocher at Koché borrowed the club’s Fly Emirates-sponsored kit and repurposed it. She deconstructed it, fashioning it into frocks and added appliqués to bring it to a hitherto unimaginable level of chic. It commented on the accessibility of football, it being something for everyone, the heightened sense of team spirit, and paired it with the escapist world of fashion, accessible to the world’s 1%. Football and fashion aren’t suspecting bedfellows but they are undoubtedly embedded in the French cultural sphere.

Lacoste, founded in 1933, celebrates its 85th anniversary and its return to Paris Fashion Week for a show en pleine air at the Jardin du Tuileries proved it still bears relevancy in the fashion conversation. Linked with sports also—tennis, in this case—the label’s creative director Felipe Oliviera Baptista deconstructed the crocodile-emblazoned polo shirt. Deconstructed sportswear in the right hands here and it made for something fresh, exciting. 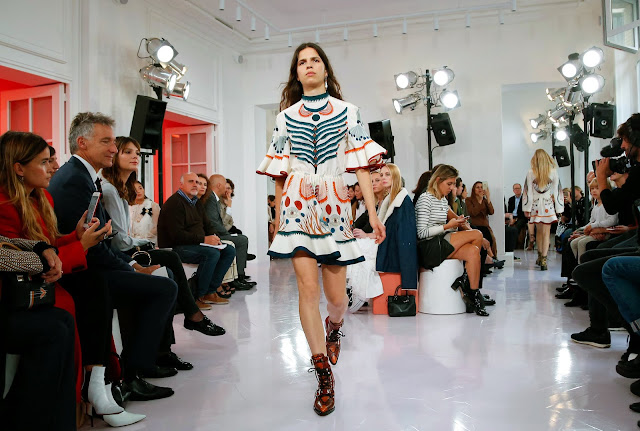 One of the few Frenchwomen designing at Paris Fashion Week, Natacha Ramsay-Levi kickstarted proceedings at Chloé with an ode to the 70s bohemia that has been at the house’s core since the decade. Founded by Gaby Aghion in 1952, creative directed by Martine Sitbon for four years in the late 1980s and early 1990s, Ramsay-Levi’s voice as a Frenchwoman fronting one of the most iconic French labels is a symbol of patriotism—that isn’t harmful to anyone. It’s putting a woman back in the centre of French fashion. (One might recall the trifecta of Jeanne Lanvin, Gabrielle Chanel and Madeleine Vionnet—each woman brought something new to the table.) Ramsay-Levi is finding her stride.

The same can be said for Frenchman Julian Dossena, at Paco Rabanne. Critically acclaimed for the use of chainmail in the 1980s, the brand was redefined by Dossena, who added sportswear elements to the collection. This season he challenged himself, he thought about what women would wear to the discotheque. He forwardly addressed the terrorist attacks of November 2015 and how they affected his life, his friends’ lives. They stopped going to nightclubs but in true French style—with bold alacrity, readiness and resilience, they started going out again. It was about club culture and the braveness of dressing in a lurex mini dress reflected the braveness of going out in these turbulent times, when terrorists are targeting places such as nightclubs.

Dossena, like Ramsay-Levi at Chloé, is one of Nicolas Ghesquière’s design disciples punctuating the Paris Fashion Week schedule. He is an esteemed figure in French fashion: his legacy has undoubtedly and endlessly inspired designers around the world and his followers appears around fashion week. Antonin Tron, founder of Atlein, is another one of these, expressing himself with his own design handwriting. His personable initiative, sees him innovate jersey but he does not wish to be pigeonholed as a “jersey designer”. He expanded his operation this season with a razor-sharp focus on tailoring, to meet the demands of the challenging French design scene. His work successfully balanced sportswear and glamour without dumbing it down, or it being just sportswear and glamour poorly spliced together. Sportswear and glamour, the recurring motif of Paris Fashion Week. Atlein was one of many to glamourise bike shorts—they turned up at Y/Project, Yves Saint Laurent also. 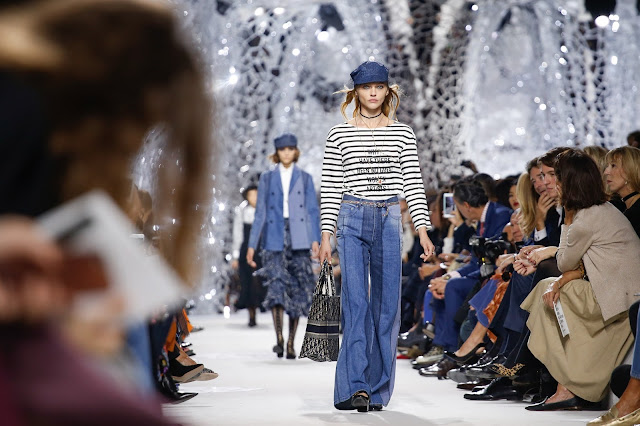 Central to the scheduling are the brand’s who act as lynchpins throughout the week, all vying for a chance to appeal to the upcoming generation. Christian Dior, captained by Maria Grazia Chiuri, cheaply commodified feminism once again. It shouldn’t be long before the designer realises slapping a slogan on a t-shirt doesn’t progress the women’s rights movement—it only serves to minimise the topic’s gravity. Lanvin’s new creative director Olivier Lapidus serves only to eviscerate the house’s integrity with a bad clothing. Comparatively, the christening of Clare Waight Keller’s tenure at Givenchy was more successful, albeit tame. A reference pool like no other, Waight Keller endeavours to bring seduction back to the fore at the house. Furthermore, Olivier Rousteing’s Balmain iteration goes from strength to the strength and his Spring 2018 was more refined, more sophisticated, a welcome departure. Chanel’s Karl Lagerfeld and Louis Vuitton’s Nicolas Ghesquière show no signs of tiring. Their respective outputs were more of the same—Chanel was peaceful and poised; Vuitton showed decorative designs and modernist sportswear.

Ultimately, what all of the designers featured have in common is an understanding that French identity isn’t something that can be definitively universal—it is what one makes of it. It may be raw sexuality to Simon Porte Jacquemus and Anthony Vaccarello, the mergence of football culture and high fashion to Christelle Kocher, brand history and house codes. Paris Fashion Week’s status doesn’t usurp the other fashion weeks’ credibility; it is singlehandedly the most important one. It blends historicism with a connection to the street, it values boldness and storytelling, it is centred around the principle of high skill—to search for France’s national identity, one needn’t look any further than Paris Fashion Week. 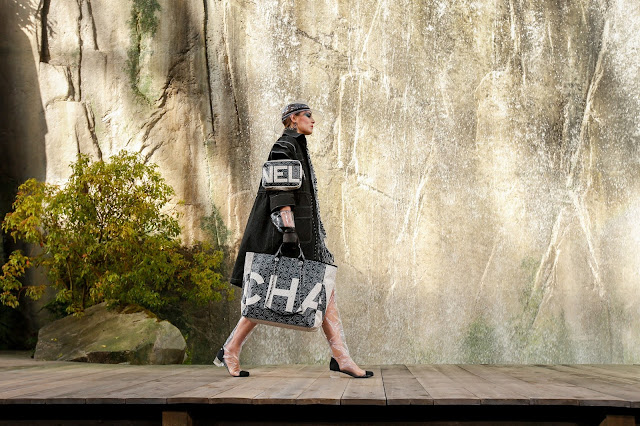