Mayor of London Sadiq Khan was front row at wunderkind Molly Goddard’s Spring 2018 show at London Fashion Week in September. Perhaps a publicity stunt to bolster his image or an effort to strengthen the mayor’s office sponsorship of fashion week—Khan’s presence was symbolic of many things. Firstly, the terrorist attack on the London underground at Parson’s Green station the previous morning spotlighted the Londoner resilience. Secondly, his fervent support for emerging designers in his city.

Notwithstanding the terrorist attack of the previous morning, Molly emanated an eccentric ebullience that has carried her brand from its initial off-off-schedule presentation three years ago, when she dropped out of Central Saint Martins in the wake of Professor Louise Wilson’s untimely death. Enduring is her aesthetic: a boozy celebration of the party women that don’t resemble Kendall Jenner or someone of that ilk. They can be slightly awkward or highly sophisticated, their clothes can have an odd fit. Simply, they’re your everywoman. They are imperfect, their clothing isn’t skintight nor does it clamour for the attention—quite confidently it just claims it. 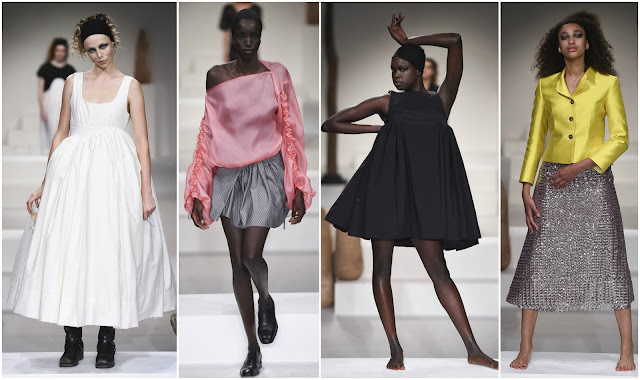 Edie Campbell opened the show in a white dress, black boots; her hair slicked back with a black headband and a glass of prosecco or cava in hand. She took a puff from her e-cigarette and a sip from her glass as she reached the photographers’ pit, a juvenile grin plastered across her face the whole time. She got the party stared, kickstarting proceedings with an amusing escape from the rigour and seriousness of other presentations on the day. (It contrasted with the quasi-intellectualism of Jonathan Anderson or the feminine fancies of Simone Rocha, the two shows she was sandwiched between on the schedule.) The procession continued with models striking elaborate poses in mismatched colours with boots—other were barefoot. She is no longer restricting herself to tulle dresses; she’s added flirty frocks and a broader outerwear selection, which have become the more exciting portion of the collection.


For the final walk the models skipped out to a chorus of applause and dance music, Erin O’Connor in lilac sequins and black tulle, battered boots, among them. It was a celebratory lap of victory for emerging designers everywhere, and a celebration of women of all ages. It was reported Sadiq Khan’s daughter is a keen Molly Goddard fan, which might’ve explained his presence at this one show. It’s clear to see she can attract teenagers to those upwards of sixty. One should also consider Goddard’s status as the leader of the new generation. Under the watchful eye of the often scathing fashion press, her business has blossomed. Her recent Fashion in Motion show at the Victoria & Albert Museum doubled as both a creative display and an opportunity to present a pre-collection.
Posted by Paulidoodles at 6:00 AM