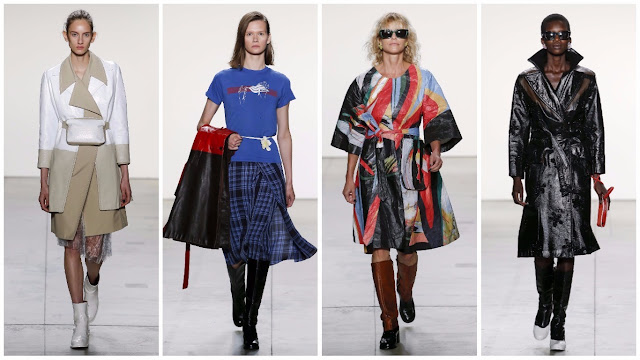 Shane Gabier and Christopher Peters are shaking things up. Their Spring 2018 show at New York Fashion Week was the turn of the tide—no longer will they occupy the luxury fashion world, in lieu of that is the contemporary level market, with lower price points. However, that’s not to say things have entirely declined creatively. Certainly, they have simplified things in order to meet this new selling point. Fundamentally, it’s the same brand with the same core values. Tinged with seventies sensibilities, the approach to dressing here is a crossover between uptown and downtown.

This season the duo infused the work of Dutch Masters. Disparate worlds: one didn’t expect to see the 70s contend with the grandeur of 17th century painting. Vermeer, Steen, Hals and Rembrandt, some examples of the Dutch Masters, could’ve been on their minds. (Abraham Mignon’s work turned up at Comme des Garçons, in fashion month’s denouement.) There was a beautiful shirtdress, printed with a decorative oil painting, towards the ends, shown with cowboy boots and tinted glasses. What it borrowed from the Dutch Golden Age was the painters’ detailed realism—these were clothes one could effortlessly sashay in, from catwalk to the street; the new contemporary level price point must’ve incited this tilt towards wearable clothing. What it lacked was the gripping sense of emotionality—there was a distinct dearth of splendour, something I’ve always found subtly pervasive in their work.

Invaluable, however, is their contribution to the American fashion industry. They are one of the few brands actually producing work in the country—New York’s Garment District houses production operations. There is the double-edged sword of protectionism, but it is better that their clothing is manufactured locally as opposed to a sweatshop in Asia where employs are paid feebly. Secondly, there is the subject of sustainability. Noticeably, more people are buying vintage clothing, rebuking fashion’s consumerist tendencies. In this collection they repurposed vintage leather jackets with aplomb. Aged, battered, distressed, they were given a new lease of life here.


They sublimated sustainability into garments more in line with their aesthetic. They had charm and sophisticated but were rooted in the earthy realism of the New York streets, in the 1970s and the 2010s. Rethinking strategy is one thing but they need to rethink presentation also. The clothes, adroit crafted for the most part, were lost against the clinical nature of the show space. Perhaps a cleverly conceived mise-en-scène, less costly and more effective, would do the trick.
Posted by Paulidoodles at 6:00 AM