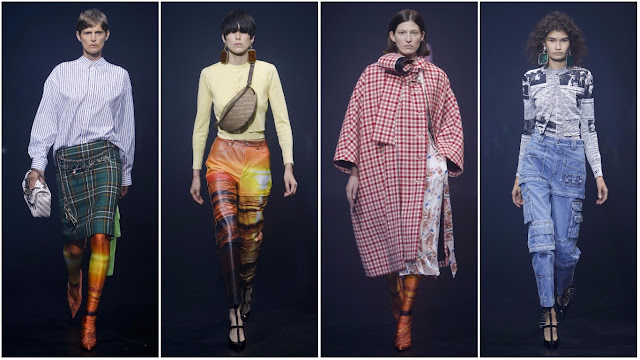 Demna Gvasalia's been at Balenciaga for a year and a half now and it feels like much longer, given he shows two womenswear, two menswear and two pre- collections throughout the year. We're on the third instalment of his womenswear ready-to-wear shows and this one was possibly the most informed by his own personal aesthetic. Presented in a blacked-out show space, with a spotlight the only illumination, following the models as they trickled out from backstage.

The alchemy of his high-fashion-meets-streetwear knowledge, ascertained from his brand Vetements, with the codes of Balenciaga allowed him to fabricate something that would redefine luxury. Although the brand plays everything by the book—with the exception of producing cocaine vile necklaces—Vetements was considered a radical proposal by the fashion press in the early days, when it was idolised to the umpteenth degree and rather undeservingly. However, his arrival at Balenciaga is truer radicalism for this was a house founded by a man whose pioneering oeuvre defined fashion generations to come. The blockbuster exhibition at the Victoria & Albert Museum documented that journey, from Cristobal to Nicolas Ghesquière to Demna Gvasalia, steering three of the most memorable iterations of the Spanish brand, presenting in Paris. It started out as sophisticated dresses for the high society and Ghesquière ushered it into futuristic sportswear territory, exploring luxury's parameters. Comparatively, what Gvasalia brings is streetwise grit. It's the direction Balenciaga has benefited from and it perverts normality.

His silhouettes are transmutative, with classic fit blazers adopting odd juts which reshape the body in intriguing ways; his coats hang asymmetrically on the body; puffer jackets recline, exposing the shoulders; this season coats are worn like bigs, the perfectly tailored sleeves vacated—this hath already been executed at Comme des Garçons, not that he professes to care about innovation. 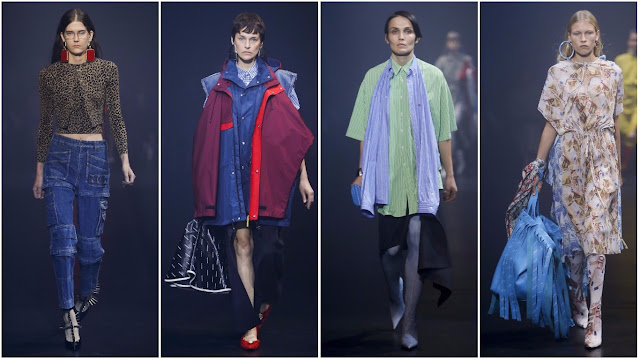 Whereupon the euro and dollar prints emerged. Money! Money! Money! A vulgar statement, placing bank notes on a dress that will cost as much as the amount of euros or dollars on the dress. It's these bold, identifiably perverse approaches to luxury fashion that keeps audiences talking. Is it right for Gvasalia to do something like that? Is he talking about the global economic crisis or vulgarly portraying wealth and the wealth required to purchase from Balenciaga? Provocation is imperative, in his mind, clearly. At least his work is evocative enough to pose such questions, conjure thought processes unexplored. (Duly noted: Givenchy's Ricardo Tisci used the dollar print in his Spring 2017 menswear show.)

Spring 2018 remixed the now-cult 'pantashoes'. The brilliant point-toe pants-cum-shoe were rendered in latex, and with screensaver prints plastered on them. The latex ones pointed to Gvasalia's fondness for fetish in fashion. The unlikely collaboration with Crocs saw platform sandals with souvenir shop appliqués take to the runway. (This is the second collaboration in recent seasons with the ugly-but-comfortable shoe brand; Christopher Kane in London partnered with them on a controversial lineup of shoes.) It was Gvasalia musing on mundanity, once again. Moreover, the show advanced his handbag output. There were cross-body fanny packs and clutch chains snaked around the models' wrists and keys dangled from each golden ringlet—practicality, normality heightened.


Gvasalia's career wasn't built on hype, his mainstream success was. He cut his teeth at Maison Martin Margiela (he's keen on noting that his stint was when "Martin" was still in the title) and at Louis Vuitton under Nicolas Ghesquière. Vetements marketed itself as a counter-cultural movement in an effort to sell clothing and it worked with aplomb. A difficult sell would be imitating that a Balenciaga—so he doesn't. He takes glamour, one of the house's prized possessions and he investigates what glamour means and what it can be. In essence, it's as if he grabs glamour by the hair and skull-drags it through the city streets. He spoke about striving for something "vicious", backstage. Those spiked heels said it all. But the aesthetic would also tell you as much: from day one there's been a violence, a displeasure within the design and it makes for oddly fascinating fashion. 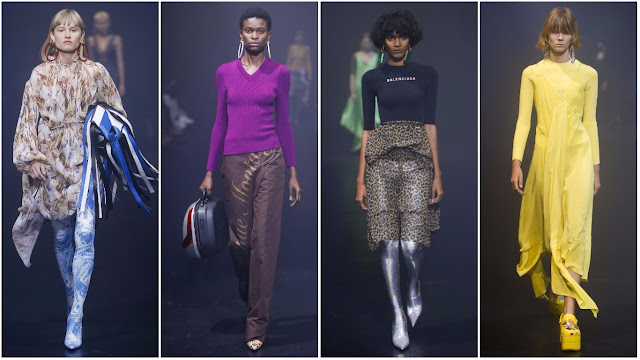