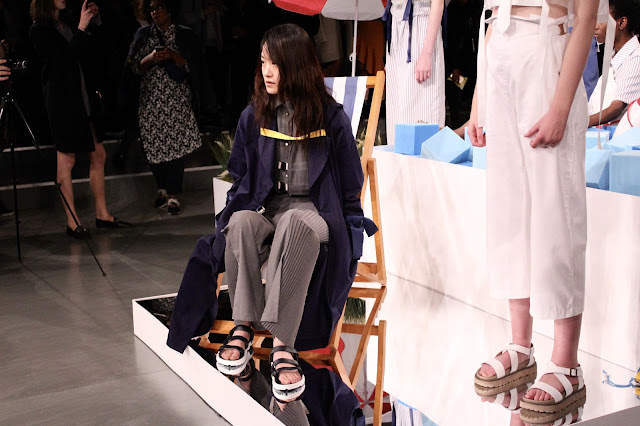 Steven Tai was one of many designers at London Fashion Week to have the outside of his show swarmed by angry activists, protesting against the British Fashion Council's support of "animal abusing" fashion designers who use fur and leather in their shows. (Similar scenes were witnessed outside Burberry and Versus.) Once inside, one felt the juxtaposition between the Tai's sandy set and the leering protestors outside. The protestors couldn't take away from the fun of his show. It was perhaps his most literal translation to date. In the past his examination of inspirations such as birthday parties, your grandmother's house, school and social media respite have seen his playful oeuvre with childlike sensibilities tackle subjects in an allegorical fashion. This season it was about capturing an emotion, the unspeakable joy foreigners have when they step foot upon sandy shores, the satiated thirst for the pinnacle of summer fun. He was looking at Italian photographer Massimo Vitali, whose cool-toned photographs of beach scenes capture the magnitude of these attractions. One felt the calming inside almost immediately.

Seaside sensibilities in the stylistic expression narrowly avoided gimmick territory. One valued the way he didn't turn it into a comical affair, rather he balanced a sophisticated elegance with a zesty playfulness. It was a show loaded with bright colours—one registered them as rafts, floats—and nautical marinière stripes. It was trite at times but lovely nonetheless.

The general consensus in London this season is that designers are approaching their collections in a pragmatic fashion, with clothing that can actually sell. It can be incredibly frustrating to see unsellable garments, 'show pieces' sometimes… it's acceptable in the case of Comme des Garçons or Maison Margiela, with various ventures sustaining business but many emerging brands, especially in London, where buzz can carry hefty weight, aren't paving a commercially viable path for themselves. Tai's innocent, childlike fantasy has been expertly balancing the two. A number of seasons ago he introduced a fine selection of tailoring and here he progressed that, but masqueraded it behind the nautical styling. There was a burgeoning sense of utilitarianism that has strengthened considerably since his debut. While he accommodates the necessity for on-brand sweet confections, he sprinkles great shirting and dresses also.

“It’s a rainy British September, and we all could use more clothing that swish with the sound of seagulls.” It’s certainly a positive riposte to the sounds of angry activists that stood outside. 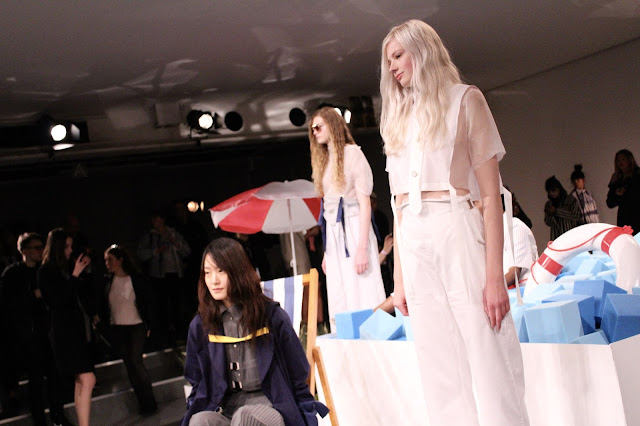 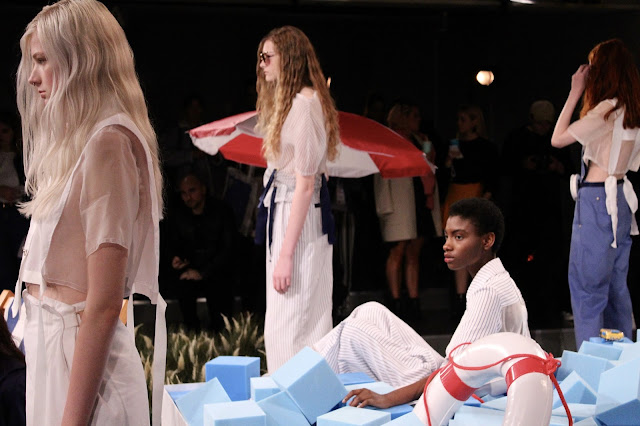 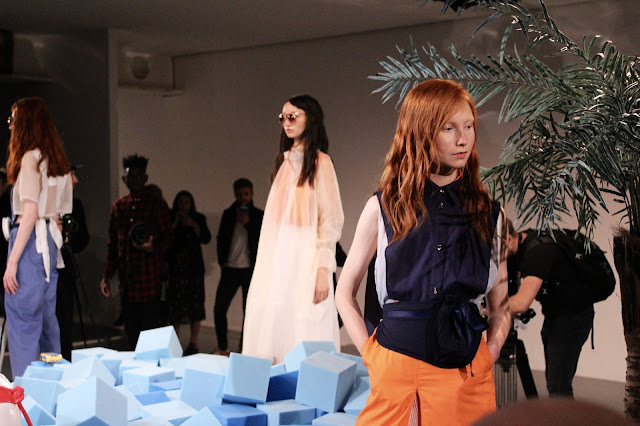 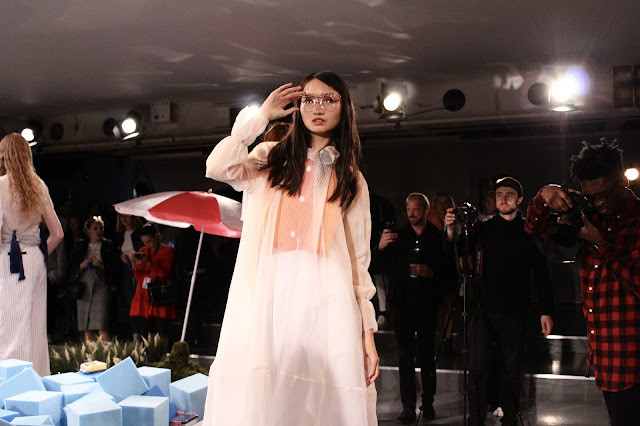 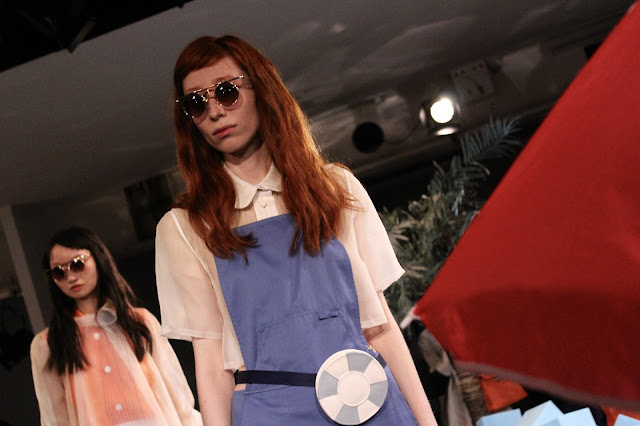 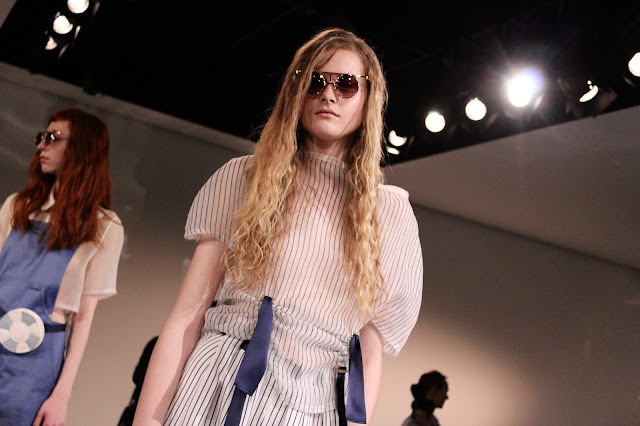 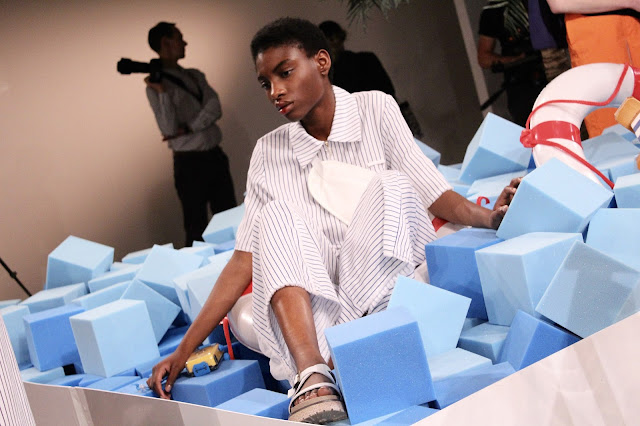 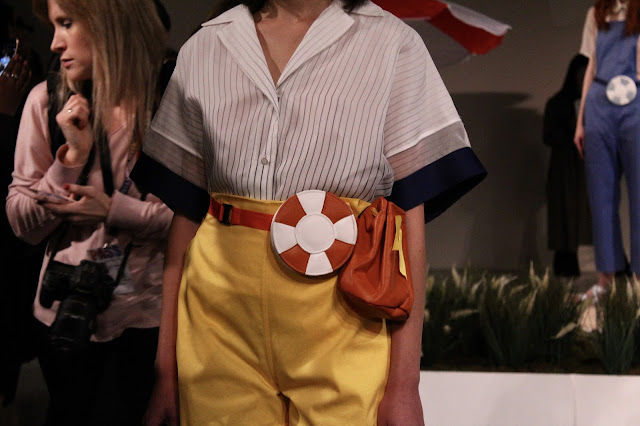