Seismic shifts are sending shockwaves across the industry.

Changes are afoot at New York Fashion Week—Proenza Schouler, Thom Browne, Altuzarra, Rodarte have decamped to Paris; Fenty x Puma is back in the Big Apple; the week heralds the return of Helmut Lang, perhaps one of the most influential fashion brands of all time. You have legacy brands such as Calvin Klein (now steered by Raf Simons and Peter Mulier) and Marc Jacobs alongside emerging labels like Vaquera and Area. New York may have lost some of its heavyweights but there are still reasons to attend.

Victoria Beckham is always a pleasantly digestible watch. Her show was easy like Sunday morning, at her usual Wall Street venue. Her aim was to empower women with clothing; in essence, she wanted to prove delicacy can too be strong. She missed the mark on that one but she attempted to convey this with spring’s finest pastels: turquoise, peach, rose, lilac. She contrasted this with some black and white looks. The clothes were fine but the messaging didn’t correlate, quite simply.

When she shifted her focus from hourglass dresses to tailoring and drapery her work enhanced exponentially. Frankly, it became more interesting. Her understanding of femininity to progressed too: she introduced trousers, unconventional shapes that women would want to wear. The influence of Phoebe Philo’s Céline has been indelible, to say the least, with her work regularly informing Beckham’s winsome aesthetic. 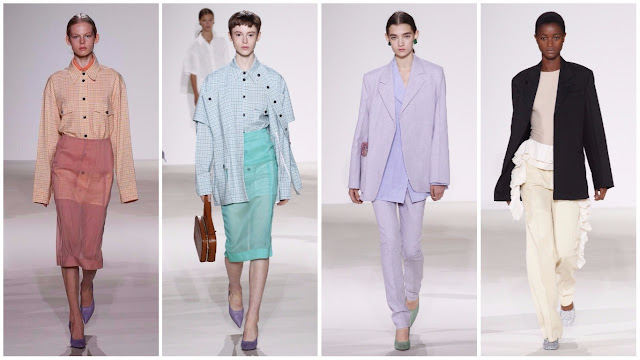 Dao-Yi Chow and Maxwell Osborne have been experiencing turbulence with the business side of their creativity. Firstly, they spent two years revamping DKNY to make it appeal to a younger generation but LVMH, who sold the company subsequently, cited “months of disappointing performance” as a reason for selling it to G-III. Secondly, they repositioned their own company, Public School, switching to presentations during the off-season in April and November—an experience that lasted a season and surely damaged sales. Now, they are back on the New York Fashion Week schedule and the press still flock.


Their Spring 2018 show was called ‘Come Again’ and it was a mishmash of Americanisms—they tackled sportswear, workwear and expressed in the only context they know how: the street. There were Prada-inspired bum shorts and an olive green top and trans-seasonal parka that succeeded, or a shoddy emerald green skirt belted with an overly-large corset that didn’t. The overriding sense of chaos was impossible to ignore. The narrowness of the runway contributed to this sense of claustrophobia and cemented the necessity of control, refinement and some simplicity. I am not requesting Calvin Klein circa 1990s minimalism, but a more disciplined approach to fashion design would allow their garments to speak articulately rather than shout irrelevantly into the void. Public School tries—credit where credit is due—but it regularly falls short on what it wants to achieve. However, with the backing of media magnate Anna Wintour, this brand is something to stick around for even if it leaves little to desire. 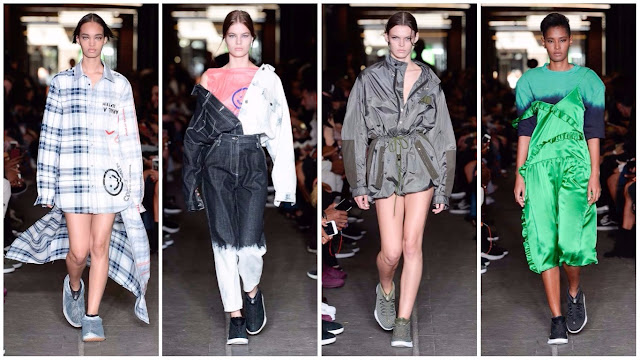 Following in the footsteps of Peter Pilotto in London two seasons ago, and Azzedine Alaïa who preceded them all, Sander Lak’s brainchild Sies Marjan ensconced its audience in the design studio in Chelsea yesterday lunchtime. The salon show reflected a simpler time of fashion week, when shows were more intimate and the audience viewed the clothes from inches away as opposed to five rows of tiered seating. His latest collection was rather brilliant. Its palette was as diverse as its casting, the silhouettes progressed from last and he laid the foundations for a future menswear pursuit.

Restlessly energetic was the outpour of colour—from start to finish we were treated with delightful hues ranging from cyan, a violet blue, blush, flame and mint. The back of the runway was a wall containing a multitude of fabrics, in any shade imaginable. The show was a palette cleansing delight, an afternoon refresher.


Sies Marjan is worth getting excited for. Simply look at street style photography from the week so far and in every other one you’ll spy editors in the spirited shades of Sies. The former Dries van Noten studio designer channels a spirited European energy into the week which differs from the sea of contemporary level brands and the tony American labels. Lak, a European, is one of the best designers on the New York schedule. Does that say more about Lak or New York Fashion Week?
Posted by Paulidoodles at 9:00 AM