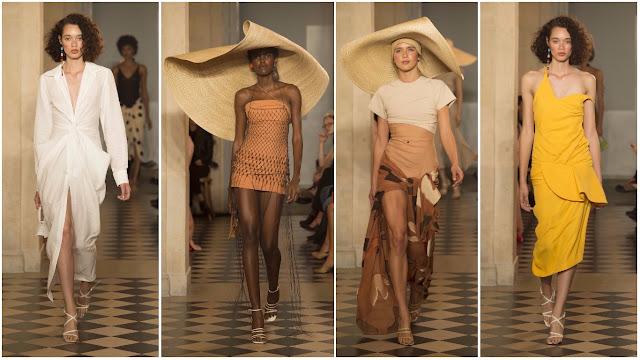 Inauthenticity is rife in the fashion industry today but thankfully, it is unavoidably detectable. Fashion watchers can easily identify references, whether something is solely for the purpose of selling (diminishing the medium’s artistic credibility) or if something is dishonest. Fakery isn’t fashionable. Simon Porte Jacquemus opened Paris Fashion Week and ignited this discussion from the moment guests stepped inside the Musée Picasso, in the 3rd arrondissement, and read the show notes. “I don’t think I ever saw my mother more beautiful than on evenings after the beach and probably when she was in love,” it begins. “Evenings when we would go for a walk around the port, past the souvenir shops filled with earrings, ceramics, sarongs and headbands. That’s the woman I wanted to talk about this season. ‘La bombe’, as we say in the South [of France].”

He shed the childlike sensibilities that permeated his early work. It’s youthful verve had gimmicks as a centric force but his moving away from that has allowed him to venture into an unexplored territory for him—one with sophistication and sexiness; where silhouette and cut are suitable for a woman rather than an expressive art exhibition. He is singlehandedly restoring modern French chicness in the fashion vernacular with his artfully-inclined shapes and an understanding of what women want to wear. He incorporated headscarves, extravagantly oversized sunhats fashionable sarongs, asymmetric heels decorated with trinkets—Jacquemus compiled the beach references and made them insatiably glamorous: from Marseille to Martinique. (Reasserting the meaning of what it is to be French has defined the first few days of Paris Fashion Week.)

Although the show notes would imply this show was solely about the South of France, it’s title was Spanish: ‘La Bomba’. Jacquemus mused on how to the two moods. In a way the show reminded one of J.W. Anderson’s recent work—his Spanish-inspired sun-kissed collections have been informed by his tenure at Loewe. Both Jacquemus and Anderson have borrowed the heat and flavour of Cristobal Balenciaga before them. However, it wasn’t irritating forgery—in either case. Jacquemus, along with many before him, have been endlessly inspired by those that have come before. Last season he dedicated his show to Christian Lacroix, an unorthodox French designer with a habitual liking for costume and decadence. Furthermore, his status as an untrained designer, one who merely worked in a Comme des Garçons store, proves his love of fashion and frames his referencing differently—it’s not appropriation.


Progression at Jacquemus hasn’t come at the expense of creativity. His fruitful business venture is attracting global customers. His work is soigné, sophisticated and sexy. It’s a distinct reminder of what clothing used to be exclusively, and want many designers nowadays are trying to resuscitate. Slowly, he’s scaling the fashion establishment’s ladder. What prevents him from being unapproachable is his innate emotionality. From the togetherness of his recent advertising campaigns or this, an honest depiction of his mother, Jacquemus is a French name exponentially rising. C’est le bonheur absolu.
Posted by Paulidoodles at 8:00 AM